As California awaits a Pacific storm to bring rain, the latest U.S. Drought Monitor report shows a slight easing of drought in the southern part of the state last week.

"With the precipitation in the region this week, improvements were made to southwest Arizona, southern Nevada, and southern California, where the impact of the summer monsoon along with the current precipitation has allowed for improvements," the report stated.

Just how wet will it get? Check out this graphic which shows forecast precip from late today thru Monday! #cawx pic.twitter.com/OaR9knm9bU

The report also said much of the Western U.S. continues to be warmer than normal, which contributes to the lack of snowfall in California and Nevada.

But, while drought conditions improved slightly in Southern California, many areas of Central and Northern California had their driest January on record, including Sacramento, Stockton and San Francisco.

"California remained dry as well as much of Washington and Oregon," the report stated.

While a storm is expected to bring much needed precipitation to the state, the report said California needs to build up its snowpack.

"The consistent issue in the west this current water year is the lack of snowfall, even in the highest elevations," stated the report. "The majority of the precipitation has fallen as rain, which has impacted many groups who count on snow for their livelihoods. Many valley locations are showing adequate rain this winter, but the same cannot be said for the upper elevations and their snow totals."

The report said the runoff from the higher elevation snowpack is "vital" for water supply.

The National Weather Service in Sacramento says a storm forecast to reach the Sacramento region late Thursday will bring rain, but any snow would come at higher elevations, rising near or above 7,000 feet, and may not add much to the Sierra Nevada snowpack.

The U.S. Drought Monitor report said precipitation chances from the storm "look impressive from central California north toward Oregon and Washington," but then noted "with the warm weather, much of this precipitation is expected as rain, except at the highest elevations."

At the end of January, the California Department of Water Resources measured the Sierra Nevada snowpack and described it as "dismally meager." 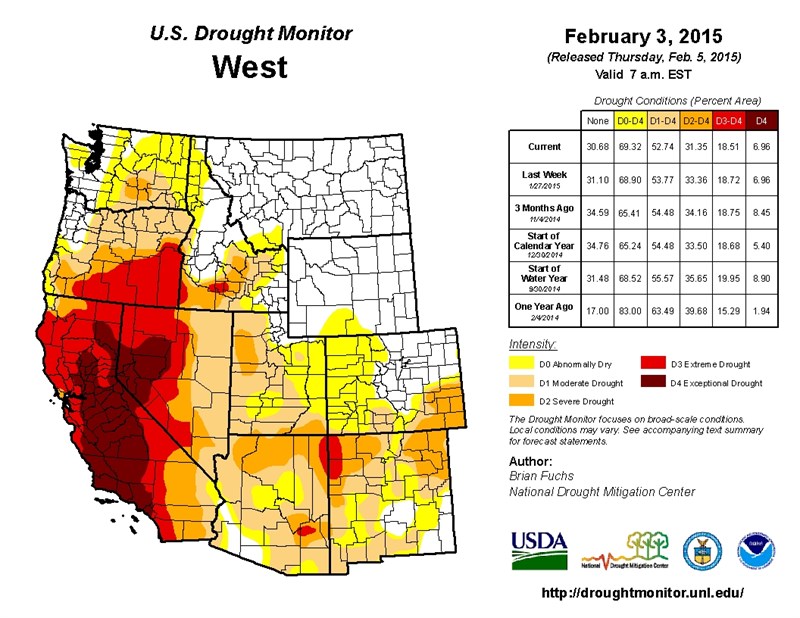