5:26 P.M. Gov. Brown says the state must plan to cover the growing cost of California’s Medi-Cal expansion under the Affordable Care Act.

He says Medi-Cal’s case load will expand to an estimated 12.2 million Californians in the coming year.

Brown does not, however, set aside any money to expand Medi-Cal to cover undocumented immigrants, such as the 1.5 million of them covered by President Obama’s executive order.

The governor does want to restore the money taken with a seven percent recession-era cut to the In-Home Supportive Services program. He opposed doing so in previous budget cycles.

3:08 P.M. - Gov. Brown is insisting that the University of California reverse its tuition hike in order to get the $120 million increase called for in his budget proposal released today

The governor says the U-C system must run itself more efficiently – and if it does, he says, the funding he’s providing will be enough.

“Most of the money is going for a good. And therefore, if you say, we want less good, that feels bad. But if all you do is hand out goods, it is bad," Brown says.

In November, the UC Board of Regents voted to approve five years of 5 percent tuition increases - as called for by UC President Janet Napolitano - unless the governor and state lawmakers awarded the UC an additional $100 million beyond the $120 million in today's budget proposal.

“The proposal that Governor Brown released today is only the first step in the process of enacting a state budget," Napolitano said in a statement. "While we are disappointed the governor did not include sufficient revenue to expand enrollment of California students and reinvest in academic quality at the university, we are hopeful that continued discussions with the governor and the legislature will yield a budget that maintains the access, affordability and excellence for which the University of California is renowned."

The governor says after setting aside money for schools and a rainy day fund, as California’s constitution requires, there isn’t much spending room left if the budget is to stay balanced.

“We can keep it that way, but it will require self-discipline and real prudence,” said Brown.

“There will be money available for us to look at some priorities. There will be,” said Atkins.

“But that’s our job, is to resist those types of pressures.”

Brown does call for using the billions of new dollars on the education side of the budget for workforce training programs, community colleges and implementing the new common core curriculum.

Governor Jerry Brown is proposing a $113 billion budget for the 2015- 2016 California fiscal year. Brown unveiled his budget Friday morning. He says it carefully balances the budget, pays down debt and invests in core needs.

His budget includes a plan for reducing the state’s $72 billion unfunded liability for retiree healthcare benefits.

“I’m going to negotiate during our upcoming collective bargaining talks for the best deal I can get for the workers and the taxpayers," says Brown. "Because if we don’t reign things in, there will be drastic cuts.”

Brown also proposes increasing K-12 spending by more than $2,600 dollars per student. He says the University of California and California State University systems will receive slight increases if they hold tuition flat. 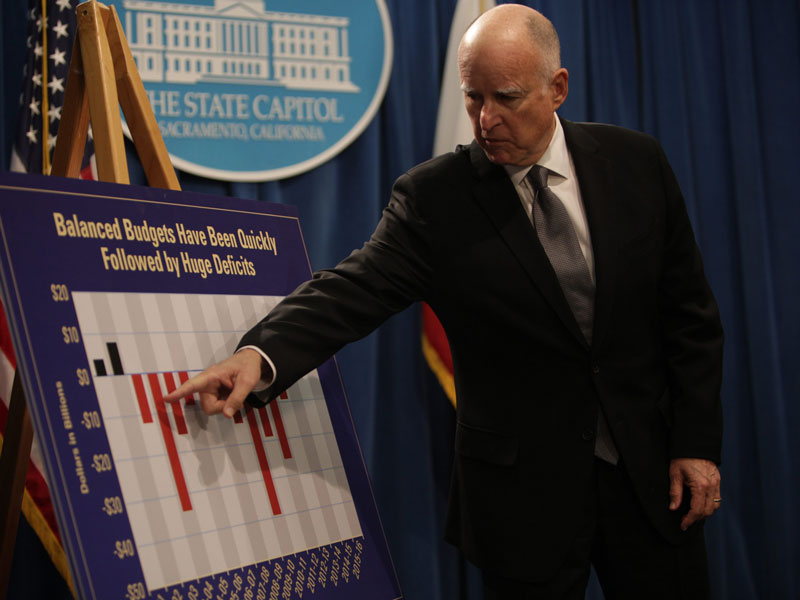 Word of the spending plan comes from a government official who was briefed on the budget but is not authorized to publicly disclose details ahead of the governor's announcement.