A California First Lady Unlike Any Other

California Governor Jerry Brown’s inauguration this week served as a rare moment in the public spotlight for his wife. But behind the scenes, Anne Gust Brown plays a much larger role than previous California first ladies.

The Assembly chambers were packed as Jerry Brown made history – the first California governor ever to be sworn in for a fourth term. And Anne Gust Brown stepped up to the podium to introduce her husband.

“Oh my god, this mind that runs at 100 miles per hour,” she told the crowd of elected officials and guests. “It is restless. It’s seeking. It’s probing. It’s creative. And frankly, for all of us who work with him, it’s exhausting. But it is so stimulating, that mind of his.”

The governor’s office says Gust Brown thought about her remarks over the weekend but didn’t start writing them down until that very morning. She’d been too busy working with her husband – on his speech.

That sums up the woman who’s been a different kind of California first lady. She’s not just first lady – in fact, the Browns eliminated the Office of the First Lady. She also holds the unprecedented – and unpaid – position of Special Counsel to the governor.

“Anne Gust Brown is a competent worker who enjoys being behind the scenes and getting things done,” says Karen Skelton, who worked with Gust Brown and other first ladies, including Hillary Clinton, Michelle Obama and Maria Shriver. She says some need to have a public presence; others prefer to take ownership of specific projects.

“But Anne Gust Brown wants to serve as a consigliere – privately and, it seems to me, hugely productive – in the way she can work side by side with her husband on his priorities,” Skelton says.

That role has occasionally led to confrontation.

“Frankly, I was yelled at more than I was talked to,” said then-Senate Republican Leader Bob Dutton, after state budget talks broke down in March 2011. “And mostly by Mrs. Brown, not even Governor Brown.”

Another time, she reportedly had a very heated conversation with the proponent of a ballot measure that competed with one pushed by the governor. But the current Senate Republican leader, Bob Huff, has nothing but praise for the first lady.

“We go through life with our life partners; they work side by side us and everything,” says Huff. “Then we get into the political arena and they’re supposed to just drop off the face of the map. That doesn’t make any sense, because it’s typically our closest working partner, our spouse, that is helping us in most of the key decisions we’re making in life. And often, we find people who complement our skill set. And I think certainly, the governor has that with Anne Gust.”

People who’ve worked with the lawyer and former Gap executive say she’s extremely perceptive, and can quickly grasp challenging subjects and analyze potential strategies. They also say she doesn’t always have patience for what she views as time-wasting political posturing.

Gust Brown declined to comment for this story, choosing to let her speech on Monday speak for itself. In that speech, she offered a glimpse of why she fell in love with Jerry Brown. They met in 1990 and married in 2005.

“His mind makes him endlessly interesting, and yet his heart makes him utterly devoted and committed,” she said.

Then, she turned to her husband.

“And it’s just been terrific being with you.” 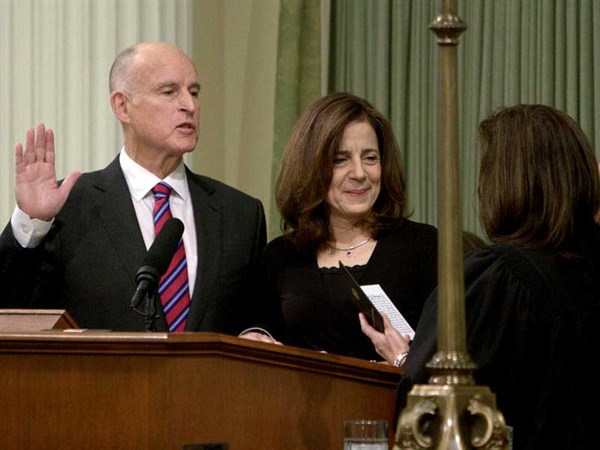