A Look At 2014: Ten Of Our Most Powerful Visual Stories

2014 was a busy year for Capital Public Radio’s multimedia producer, Andrew Nixon.  From breaking news to long-form documentary coverage, he kept his lens trained on compelling stories from around our region. We had Andrew select 10 visuals from the past year that he thought were especially noteworthy and to share his comments about them. 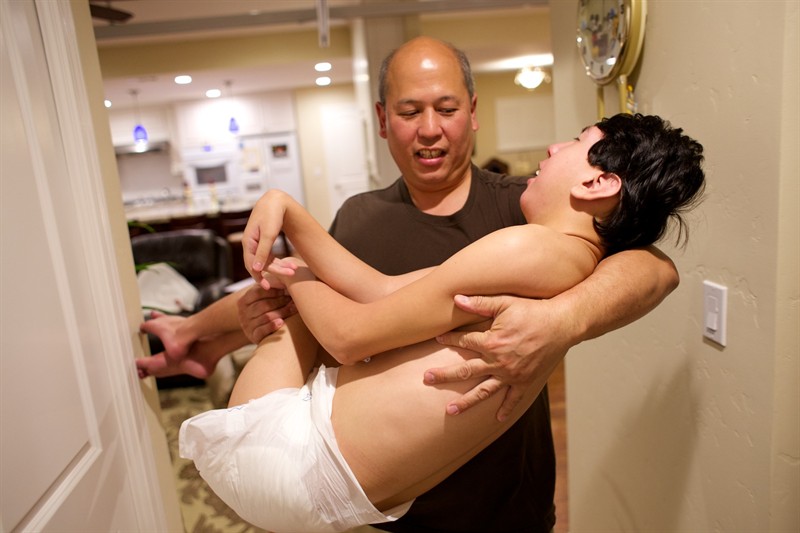 Who Cares - Destined To Be Caregivers

“Judy and James insist they wouldn’t change their situation. They would make the seizures stop if they could. They would relieve any physical pain Justin is feeling. But they wouldn’t trade him for a typical child.” - Reporter Katie Orr, The View From Here

James and Judy Lee allowed us to spend weeks documenting their lives as caregivers for their son, Justin, who has cerebral palsy. This photo shows James carrying 16-year-old Justin to the bathroom to bathe him.  It was part of a photo gallery for our multimedia documentary Who Cares. It was also included on NPR's website as part of our subsequent 3-part collaboration on family caregivers. The image sparked some controversy that was addressed in the NPR health blog, Shots.

Read NPR's story about the decision to publish this photo and the reaction it sparked.

“There's nothing else in the real world that gives me the feeling of a good match.  Day job, struggling to make rent every month, can’t run my air conditioning ‘cause I'm poor....this scratches an itch that nothing else can scratch.” - Joshua “Sir Samurai” Littell

I loved professional wrestling as a kid and when I heard there was an independent scene in northern California, I knew I had to do a story on it. After I met Joshua Littell, I pitched my editor. I wanted to learn more about why Littell, aka Sir Samurai, transforms himself from an everyday restaurant foodserver into his version of a WWE god in a high school lunchroom in south Sacramento. (Special thanks to my colleague, digital producer Marnette Federis, who assisted me on this project.) 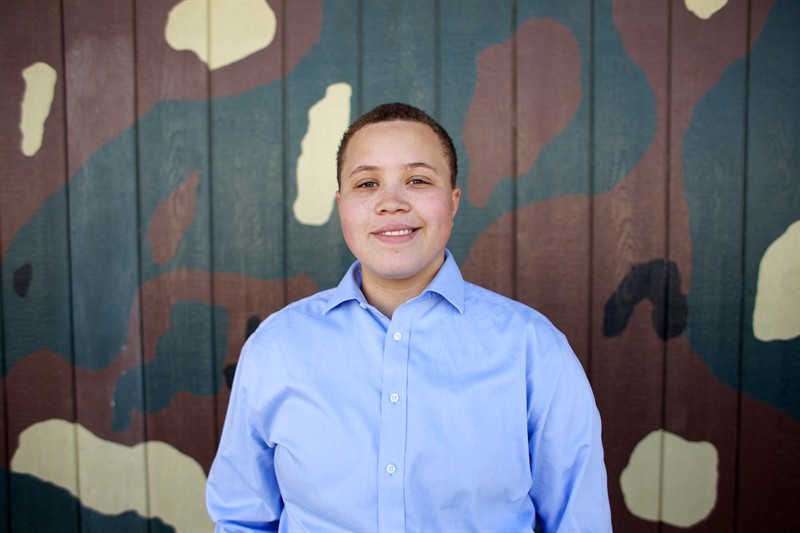 “In many ways Ashton is a regular kid. But, at 16, he’s also dealing with a pretty adult situation. Ashton is transgender and has become the face of a new state law that requires public schools to let transgender students use bathrooms and locker rooms and to play on sports teams according to which gender they identify with, regardless of their biological sex.” - Reporter Katie Orr

I arrived at the Lee family's home in Manteca before Ashton woke up.  His mother welcomed me and over the course of the day I photographed Ashton with his family and at school. During our time together, I saw something that some people expected to see and others were surprised by: a regular teenager. 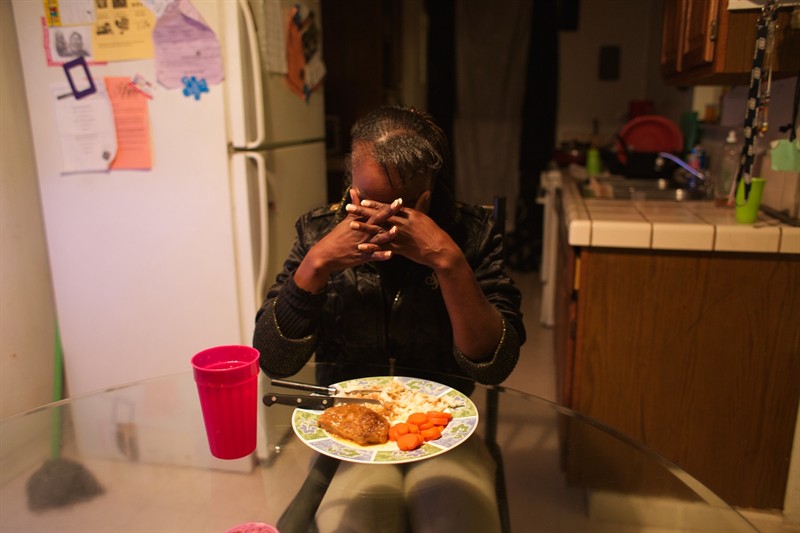 “When I’m real low on food...I’ll wake up and I’m like ‘Okay, what are they going to eat?’ I have no clue what they’re going to eat,” Johnson admits. “And I sit there and it takes a while to come up with something...I’m like, ‘Okay, guys, here’s the thing. We’re almost out of food, so mom has to compromise.’” - Erica Johnson from the documentary, Hidden Hunger

I've lived in Sacramento for nearly 20 years and had no concept of how widespread hunger and food insecurity really are here. When we began collecting stories for the Hidden Hunger project, I was shocked by the enormity of the problem. Erica Johnson is one of the people in the documentary. She lives without some things many of us take for granted, like a car. But she is grateful for what she does have.

Erica had nothing to gain from letting me into her home, but the single mother of four opened her door. I spent time with the family, and after Erica finished feeding her kids,  I took this photo of her saying grace over her own plate.

What made this image stand out to me was that most people I photograph seem to simply get used to me being there and that's how I get a candid shot.  Erica just seemed too tired to care.

I went to the Sacramento County Fair with an assistant, Robb Swanson, expecting to find strong visuals for a simple video postcard about the demolition derby taking place there. What we found was a loving family with a passion for destruction. Robb and I quickly changed gears and started interviewing the men who traveled from Modesto to crash cars into each other for some prize money and treasured bragging rights. 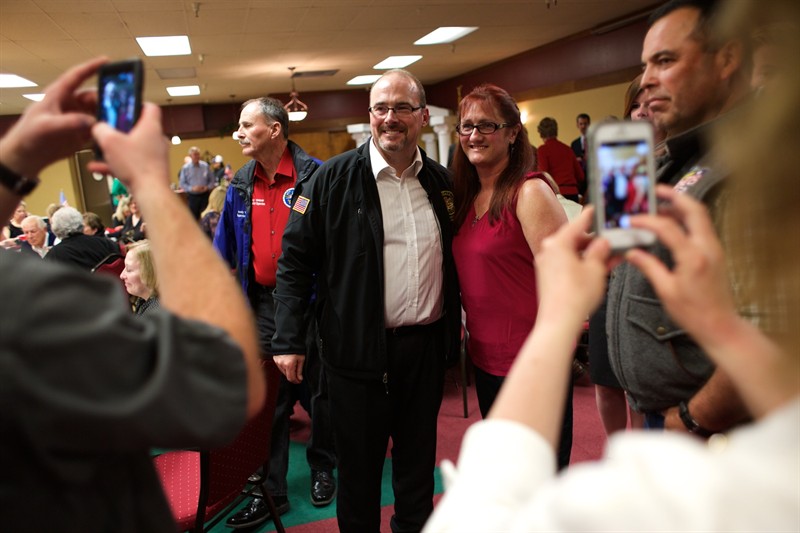 Donnelly Takes a Ride on the Liberty Express

“This is no deluxe operation -- this is campaigning for governor on a budget. At the end of 2013, Donnelly’s campaign had just over $54,000 cash on-hand. Gov. Jerry Brown had nearly $17 million. Donnelly insists money isn’t everything.”  -Reporter Katie Orr

The afternoon and evening I spent on Tim Donnelly’s bus, “Liberty Express,” revealed to me the inner workings of a political campaign. He and his team were constantly on the phone, raising funds and prepping for a speech that night, all while riding in an RV.  I was floored by the seemingly frantic but closely coordinated activity on board the bus emblazened with his campaign's messaging.

62-year-old African guitarist Oliver “Tuku” Mtukudzi incorporates elements of different musical traditions from across Africa, creating a distinctive style known as “Tuku Music.” His charm manifests itself in his voice and guitar. The catchy rhythm and attractive melodies of this song, "Zvinoita Tikudzwe," made recording and editing the video a real pleasure.

It’s tough to predict what is going to strike a chord on social media, but a simple video of finger-style guitarist Andy McKee performing "Rylynn" quickly became our second-most viewed video on our YouTube channel. His distinctive guitar techniques have made him popular amongst music fans and musicians alike.

Often my source for literary stories, local poet Kate Asche let me use a recording she made of her poem “Yolo Causeway” for a video. In the style of this 2012 poetry video “City of Slow Rivers.” I spent an afternoon in the Yolo bypass gathering footage to compliment her words. 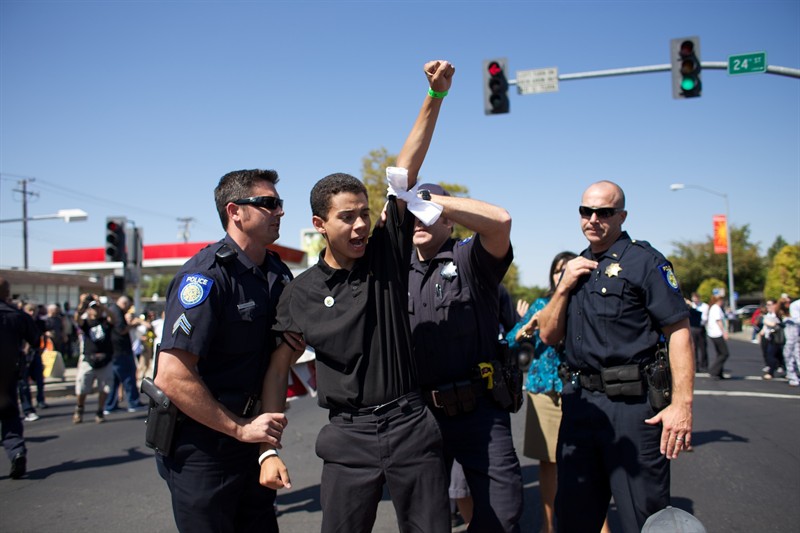 What was billed as a march from one fast food restaurant to another turned into a complete shutdown of the otherwise busy intersection of 24th Street and Broadway in Sacramento.  As police moved in to clear the road, many in the crowd advocating for higher wages and a union for fast food workers stepped back. Other protestesters in fast food uniforms who refused to leave were taken into custody.