Get the latest traffic information from CHP

UPDATE 5:25 PM The National Weather Service has issued a flash flood warning for Sacramento, El Dorado and Placer Counties.  Many local roads are under several inches of water including Interstate 80 at Watt Avenue.

The Weather Service says it is expecting an additional inch-and-a-half of rain before 8 pm tonight.

Highways, underpasses, and low-lying areas are at particular risk. The National Weather Service urges you to refrain from attempting to cross flood waters by car or by foot.

Debris flows possible over burn scar areas this afternoon and evening with periods of moderate to heavy rain. #cawx pic.twitter.com/gDr6DudtU5

In Sacramento, flooded streets and heavy rain meant another slow commute this morning.

National Weather Service forecasters say Sacramento is close to totaling 2 inches of rain from the storm. 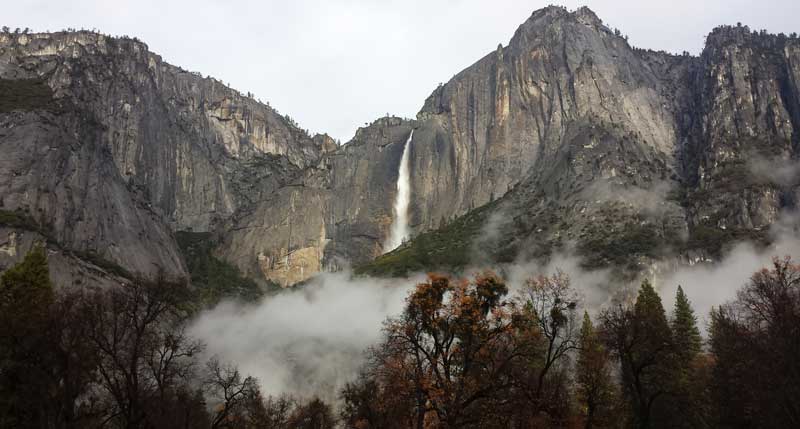 Upper Yosemite Fall is flowing at full force due to recent storm activity in the Yosemite area. Most of the park’s waterfalls are flowing rapidly after being completely dry for several months. All roads leading into Yosemite Valley are open. Photo courtesy NPS.

In Yosemite National Park, where Yosemite Falls had dried to a trickle, the waterfall is flowing freely again.

In Southern California, more than eight inches of rain fell at Yucaipa Ridge in the San Bernardino Mountains east of Los Angeles.

Despite the storm's scale, forecasters say it would take many more similar storms to pull California out of a three-year drought.

The rain is expected to last through tomorrow.

@nick_janes shot this in front of our office on Exposition Blvd. Drive safe! https://t.co/JS6BJDTI9D