Attacking The King Fire From The Air

There are thousands of firefighters fighting the King Fire on the ground. In the air are a few dozen aircraft that must be carefully choreographed to help those below.

Cal Fire's Branch Seven Division Union is along Ice House Road on the west side of the fire when it jumps the containment line.

"Advise we do have fire across the line in Union. It's making a push up towards Drop Point 73.  All resources are accounted for. We got about half our resources in a safety zone down below 73. But, there is fire on the other side and we are not able to engage at this time." 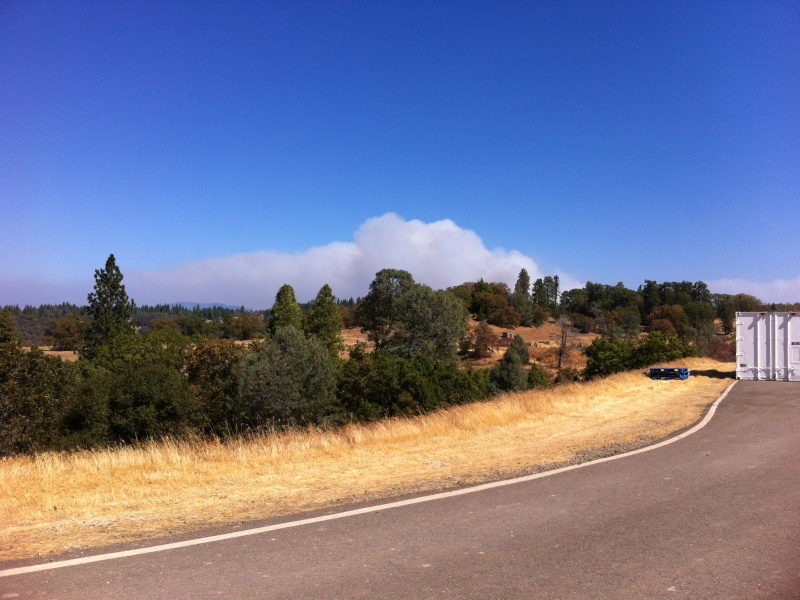 "Stay safe and we'll get some air support in there to take the heat out of it."

Within three minutes of the report of the breach on Ice House Road, helicopter pilots begin dropping water on the fire.

A spotter reports, "Right now we've got two helicopters with more coming to support this flare up in Union. It's worked up the slope. It's totally lined up." 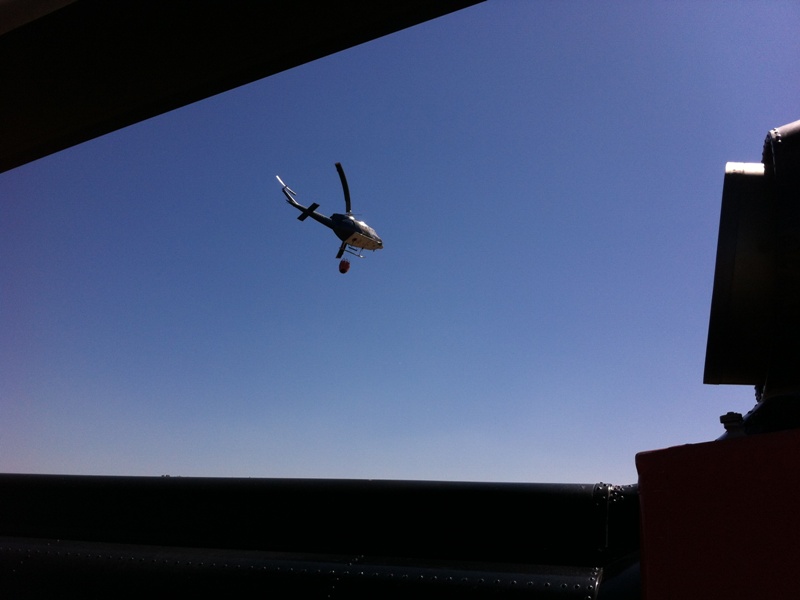 Cal Fire is relying on helicopters at this stage of the fire because they can navigate the fire line more easily and they can fly in poor visibility.

Now, a week-and-a-half into the fire, the pilots are used to the routine. But, things were not nearly so organized when the fire broke out last Saturday.

Tom Humann is a helicopter pilot with Cal Fire out of Boggs Mountain. He was on the fire the first day. For awhile, the pilots had to rely mostly on each other.

"Finding dip sites that work, finding a pattern that works, everyone stays out of each other's way, calling out hazards because we just first showed up to the fire," Humann says. "We don't know where the towers are.  don't know where the wires are. We're looking for other aircraft that might be coming into the scene."

Fixed-wing aircraft were also instrumental in the early response to the King Fire.  Bombers hit one side of the fire. Helicopters targeted the areas with poor visibility. 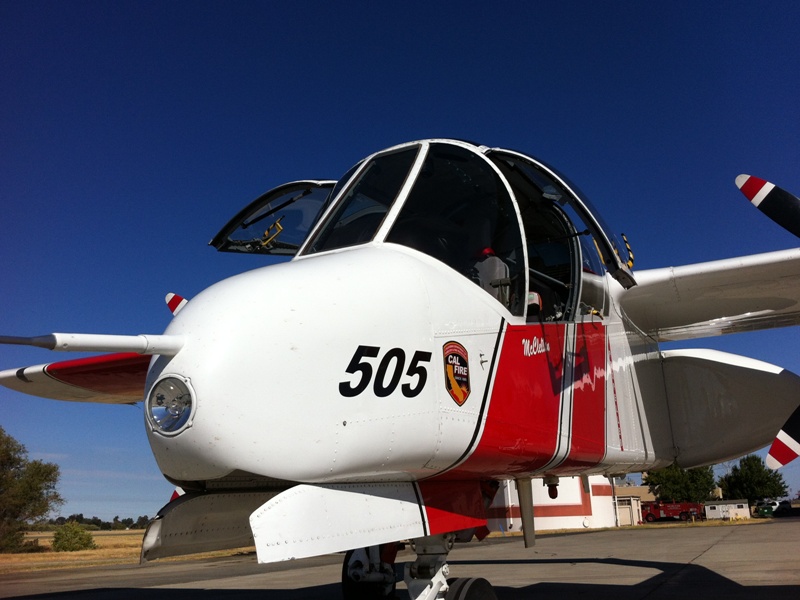 A small plane, commonly called a spotter, is also used as a lead plane. It leads the bombers through the smoke to drop retardant. Garrett Sjolund is a Cal Fire Battalion Chief out of Chico.  He is on one of two lead-plane crews flying out of McClellan.

"Puff of smoke marks the target and then we describe the target," says Sjolund, "whether its a slate rock pile or a ridgetop or tying it into an open area, parts of the fire -whatever it takes verbally to get em on target.

Coordination of the two types of aircraft is critical.

"Helicopters can stop and hover. Airplanes don't. They move forward all the time in order to have air speed," Sjolund says. "What we don't want to happen is to drop down over a ridge to drop retardant and have a helicopter in their way on the other side of the ridge we don't see on their exit and then an accidental collision or something happen."

Bryan Baker is a Tanker Captain for Neptune Aviation, which is contracted by Cal Fire. 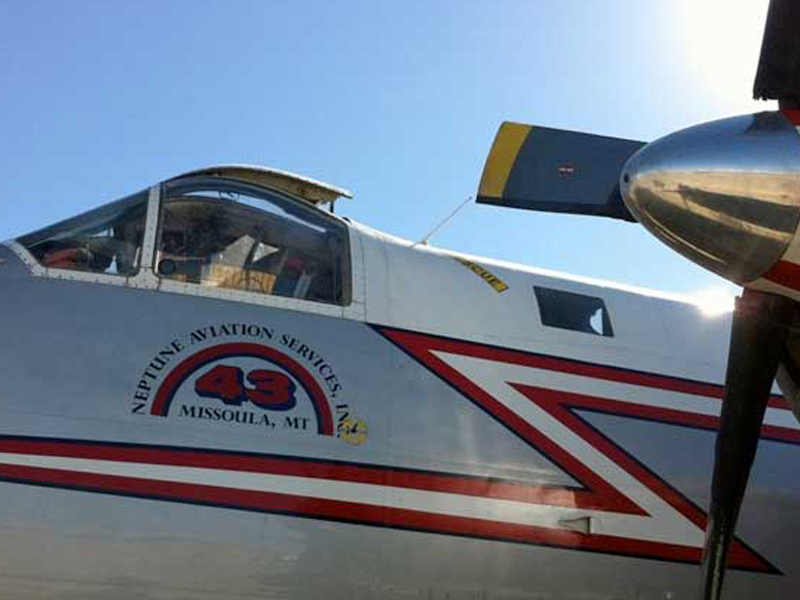 Sometimes, there is only so much they can do when a fire gets into a canopy of trees.

"The second or third day when this thing really blew up and made that 50,000 acre run...it's amazing that we were able to... you can't control it at that point," Baker says. "But, we can kind of guide it and steer it where we want and that's what we did to keep it away from the more densely-populated areas."

Even though they may be the firefighting force people can see, their job is to help the 7500 firefighters on the ground in what they are doing.

"The other night we were dropping. It was pretty late, so we could see all the flashing lights from the fire trucks," Baker says. "The men and women on the ground are just doing an incredible job of getting in and setting up defenses in front of the structures and just really doing an outstanding job of getting in their and protecting  homes in what is a very difficult area to protect homes." 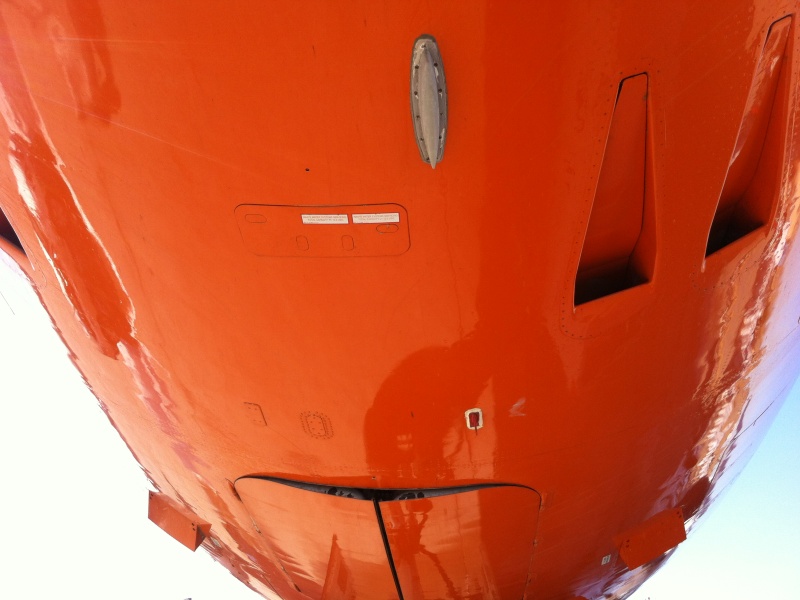 This belly of this DC-10 holds 11,600 gallons of retardant. The plane is contracted by Cal Fire from the company 10 Tanker.

McClellan's Air Tanker Base can be established within two hours of a request from Cal Fire.

So far this year, planes flying out of McClellan have used 964,000 gallons of retardant on fires in northern California.   Two-thirds of that has been dropped on the King Fire. 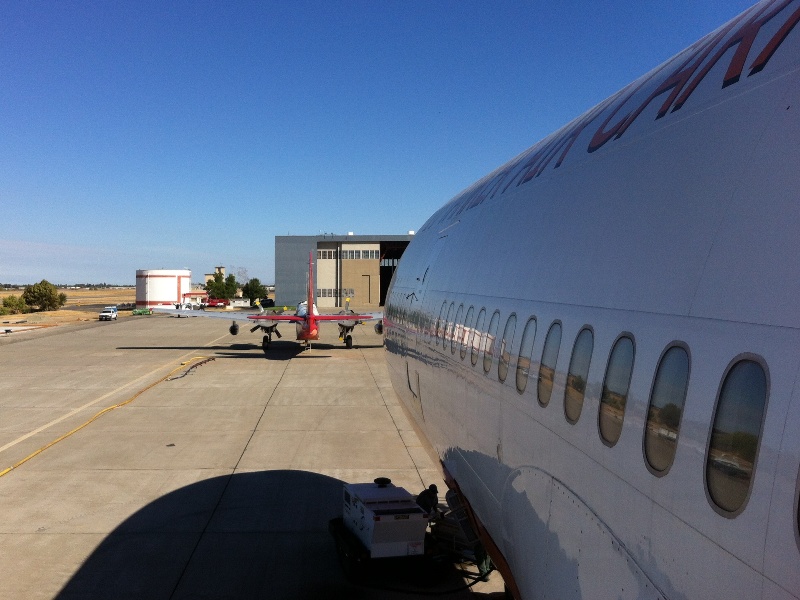 Three types of planes at McClellan help with the King Fire fight. The spotter in the distance, the bomber in the middle and the DC-10 in the foreground.