Mexico’s president has wrapped up his two-day visit to California with a lunch hosted by Gov. Jerry Brown and an address to a joint convention of the state Legislature.

After arriving in Los Angeles on Monday, Mexican President Enrique Peña Nieto spent yesterday at the state Capitol. The president praised Gov. Brown and California lawmakers for passing laws intended to help undocumented immigrants – such as allowing them to attend college and obtain driver’s licenses. He called that “the right political and ethical stance.”

“Progress you have promoted not only benefits Californians, because you have sent a very clear message to the United States and the entire world that cultural diversity reaches and benefits societies,” Peña Nieto told lawmakers.

Before President Peña Nieto spoke, Gov. Brown also addressed the Legislature. Brown took jabs at Texas and the federal government, and said he’s excited about the relationship between California and Mexico. 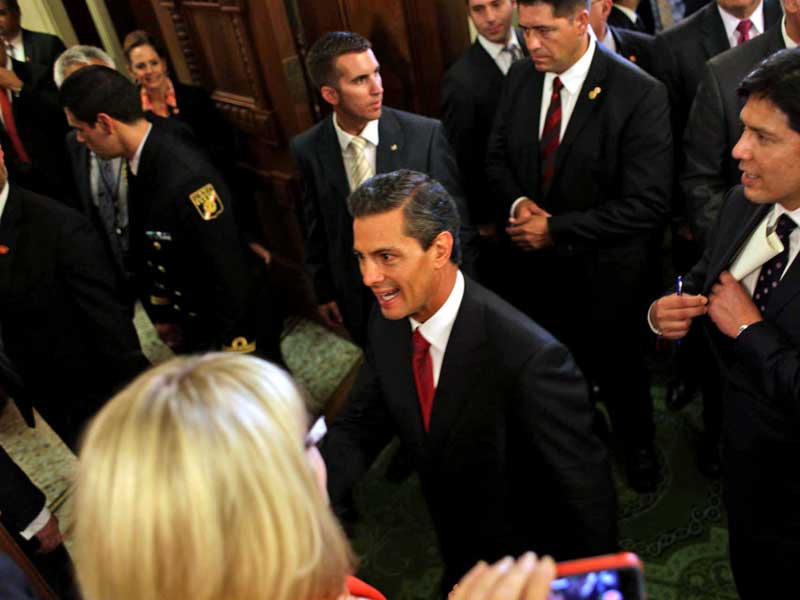 “While our past has been full of conflict, even war, racial and ethnic insensitivity, I think we’re at a very good point in our history of open-heartedness and willingness to pull together,” Brown said.

Earlier Tuesday, Brown hosted a lunch for President Peña Nieto near the Capitol. A group of people protested outside, calling for the release of a U.S. Marine being held by the Mexican government.

The president’s visit to California comes less than a month after Gov. Brown led a trade mission to Mexico City.