Close your eyes, and imagine music for a Shakespeare comedy. Something Elizabethan might seem in order, right?

Actually, Shakespeare rarely set his comedies in England. He preferred exotic lands, where young travelers learn about themselves, and find love.

In Tahoe Shakespeare’s “As You Like It,” the music is brassy and syncopated.

That’s right, director Edward Morgan picks the Jazz Age. The show opens in an industrial city, with clanking factories. Workers covered in soot attend a rowdy wrestling match. The champ has been bribed by a crooked Duke, who wants him to snap the neck of Orlando, a young noble whom the Duke fears.

Yes, they rigged these things, even in Shakespeare’s time. But Orlando survives this intended rubout. He skips town and hides in a forest. And in a flash, everything changes. 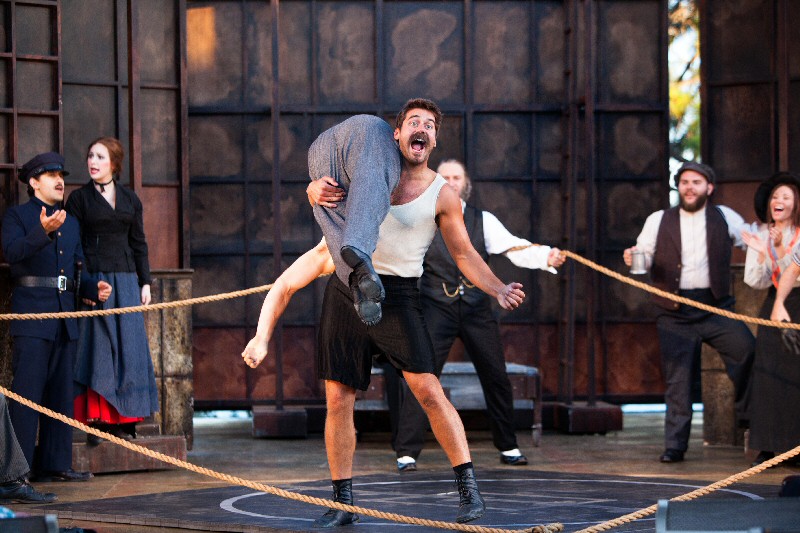 Singing birds. Venison and vino. Voluptuous farm maidens. Urban corruption and political paranoia evaporate – and the play is taken over by giddy young lovers, behaving foolishly. Orlando is one of them: he places scribbled love notes on trees, praising his dream girl Rosalind. Folks get annoyed, and one of them lampoons Orlando’s purple verse.

Touchstone: “Sweetest nut hath sourest rind; Such a nut is Rosalind. He that sweetest rose will find, Must find love’s prick, and Rosalind. (Laughter)"

But amidst all of this romp, you hear one of the great speeches in the English language:

Jacques: "All the world’s a stage, and all the men and women merely players. They have their exits and their entrances."

In baseball terms, Shakespeare knows how to throw a changeup. He shifts seamlessly between the sublime and the ridiculous, as the city slickers in the play gradually learn to appreciate country life. Tahoe Shakespeare has framed this 400-year-old comedy cleverly, and effectively, in century-old American terms. And the concept works.

The Lake Tahoe Shakespeare Festival production of “As You Like It” continues through August 24th outdoors at Sand Harbor on the Nevada shore.