The 7th Congressional District is one of the most competitive House districts in the country. It’s almost evenly divided between registered Republicans and Democrats.

The district includes parts of Sacramento, Rancho Cordova, Elk Grove, Folsom and Galt. The seat is currently held by freshman Democrat Ami Bera. Three Republicans are challenging him in the June primary.

Political analysts will tell you that getting re-elected to Congressional District 7 is no easy accomplishment for any candidate. Party affiliation doesn’t ensure victory. Freshman Democrat Ami Bera is mindful of that. It’s one of the reasons he’s touting his work with a bipartisan group of 94 lawmakers known as the No Labels’ Problem Solvers Coalition.

“We know we’re in divided government, and we need to elect leaders that are willing to work across the aisle that have a track record of working across the aisle and my work as a No Labels Problem Solver is exactly where we need to go to solve the challenges we face,” says Bera.

Bera, a physician, points to his work with Republicans on legislation that would delay a tax on health insurers under the Affordable Care Act. He says the tax is passed on to consumers.

“For those middle class families that may see an increase in their premium, those small business owners, this would be a direct three percent relief," he says. "So that would be a refund of rates they’ve already paid.”

All three Republican candidates say the Affordable Care Act should be repealed. They’re making it the key issue this election season.

While Bera has plenty of cash-on-hand compared to his opponents, the Republican contest is generating national attention -- and money.

The National Chamber of Commerce is funding political ads for former Congressman Doug Ose. The developer served three terms in Congress, from 1998 to 2004. After returning to Sacramento, he ran unsuccessfully for an open Congressional seat in 2008, losing to Republican Tom McClintock. This time around he says he’s running because he’s disappointed by what he’s seen in Washington D.C.

“And I’m not going to stand on the sidelines and let it keep going in a direction I think is wrong." says Ose. "I’m running for Congress to help change the direction of this country, get the economy back on track, get spending under control, and repeal and replace Obamacare.”

That’s pretty much what other Republican candidates think too. But Ose says besides his previous experience, there are other things that set him apart.

But Republican Igor Birman says where he comes from makes him the better candidate. Birman came to the United States at age 13 as a refugee from the Soviet Union in 1994.

“We really found the American dream here, we flourished we came here with absolutely nothing having lived through terrible miseries in the Soviet Union," says Birman.

"Now, as much as I look around, I see government policies destroying that American dream and putting it out of the reach of families who need it the most,” he says.

Birman was working as Representative Tom McClintock’s Chief of Staff before deciding to run. He has the backing of Tea Party affiliated groups and says he’s the only real conservative in the race. And he’s making a number of promises.

The other challenger in the race is Elizabeth Emken who ran unsuccessfully for US Senate against Diane Feinstein in 2012 and for Congress in 2010 when she lived in another district.

“We have a civil war going on right now in the Republican party in the establishment versus the Tea Party wing of the party," says Emken. "I will tell you that I bridge both groups together nicely but I don’t owe my allegiance to either group.”

Emken touts her problem-solving abilities. She became a lobbyist for Autism Speaks after her son was diagnosed with autism. She believes the health care system needs an overhaul but doesn’t believe the Affordable Care Act is the answer. But she separates herself from the other Republicans this way.

“My priorities are for the people right here in the 7th congressional district in solving the problems that are affecting their families every day," she says.

"I’m not looking to be responsive to any ideological organization that has paid my way into a seat. We see that time and time again both sides of the aisle, and I reject that,” says Emken.

The top two candidates regardless of party affiliation will move on to the general election. 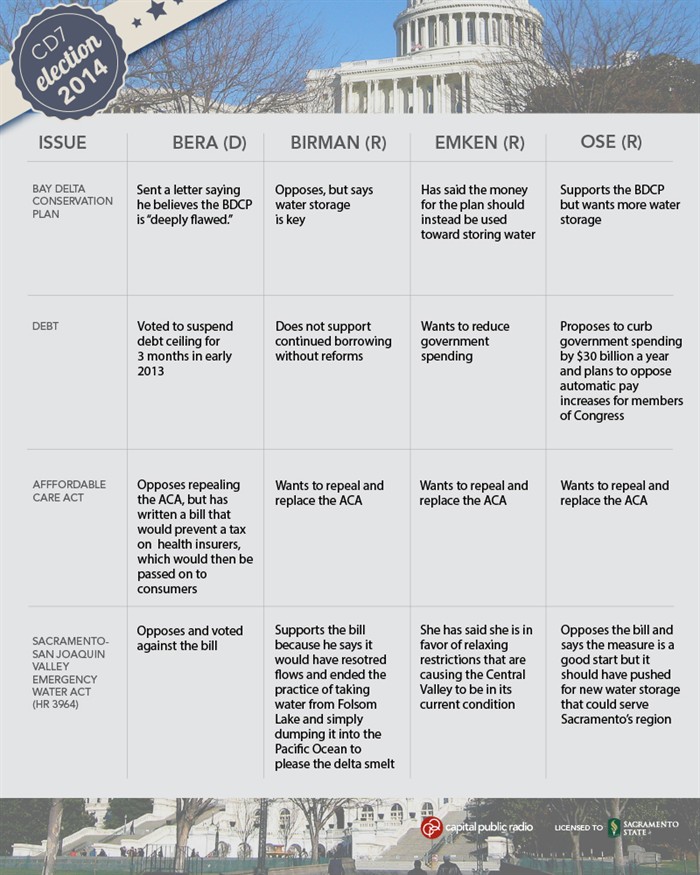 Sacramento to open warming centers as temperatures near freezing