Investigation Into Fatal Crash Near Orland Could Take Months

CHP Lieutenant Scott Fredrick says investigators will try to determine what caused the truck to cross the I-5 center divide.

“We don’t know whether the FedEx driver had fallen asleep, whether he experienced a mechanical failure with his vehicle, or whether there was a separate collision on the southbound side that caused him to lose control,” says Frederick.

The bus was carrying high school seniors from Los Angeles to Humboldt State University near Eureka on the Northern California coast.  The students were participating in a decades-old program that helps prospective low-income and first-time college students from urban areas visit the university.

The Sacramento County Coroner’s Office has identified Arthur Arzola, age 26, from Rancho Cucamonga, as one of the victims in the fatal bus crash that occurred on 4/10/14 in Orland, CA. Next of kin has been notified.

KPCC reported that Arzola was an admissions counselor from the Los Angeles area. He died at the University of California Davis Medical Center.

9:29 A.M. (AP) The death toll in a fiery crash near Orland stands at 10. Southbound I-5 near Orland has reopened, but northbound lanes are still closed due to the investigation.

In addition to both drivers, the patrol says three adult chaperones and five teenage students were killed in the crash Thursday on Interstate 5 near Orland. Their identities haven't been released.

The patrol says the bus and truck were on opposite sides of the freeway when the truck crossed a grass median and slammed into the bus, causing an explosion and fire.

According to the CHP, southbound I-5 has reopened. But northbound lanes are still closed due to the investivation. As of 8 a.m., Caltrans said the northbound I-5 will reopen at noon.

A survivor of of the crash says many of the people on the bus were able to escape through a window that someone had kicked open. They ran for their lives to the other side of I-5 before hearing an explosion and seeing the bus burst into flames.  The bus was carrying high school students from Southern California for a college campus tour at Humboldt State University.

At a press conference Friday morning, Earl Perkins, assistant superintendent for L.A. Unified School  District, said 19 students on the bus are from the district.

"We have crisis counseling at all the schools we've mentioned," Perkins said. "Prepared all the administration operations, all the area superintendents. Working with the school principals, they have their crisis teams available assisting all those in need."

“The news of last night's bus crash near Orland continues to grow more grim and heartbreaking today. These injuries and loss of life are made all the more poignant by the fact that these students were preparing for college, poised on the edge of an exciting time full of possibility. Our thoughts and prayers go out to them, to the caring adults who were there to support them, and to their friends, family, and loved ones.” 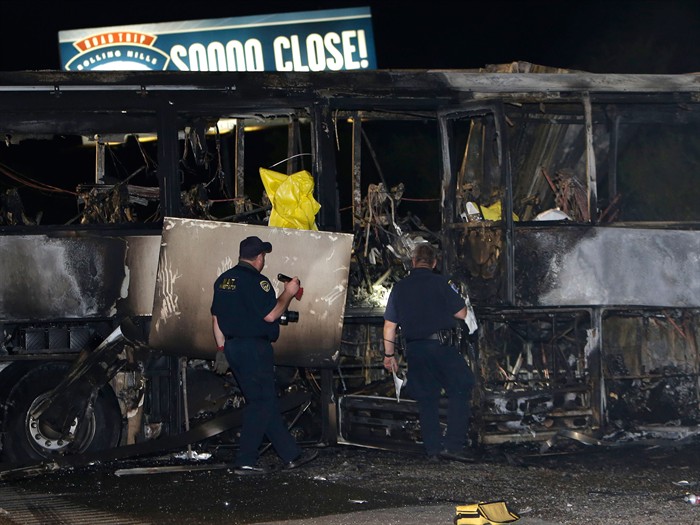 A California Highway Patrol Officer shines his light on a yellow blanket covering one of the victims of a fatal crash between a tour bus and a FedEx truck on Interstate 5 Thursday, April 10, 2014,in Orland, Calif. Nine people were killed and dozens injured in the fiery crash between the truck and a bus carrying high school students on a visit to a Northern California College. Rich Pedroncelli / AP

10 P.M. --(AP) -- The California Highway Patrol says the drivers of a FedEx delivery truck and a charter bus carrying high school students on a visit to Humboldt University are among the nine people killed in a fiery crash on north Interstate 5.

The CHP says investigators think the other seven fatalities were all people riding on the bus, but have not yet confirmed whether they were all teenage students.

A CHP dispatcher says the bus and truck were on opposite sides of the freeway when the truck crossed a grass median and slammed into the bus, causing an explosion and fire.

According to media reports, both sides of I-5 near Orland will be shut down until 7 a.m. as authorities investigate the crash.

Humboldt State University is deeply saddened by a tragic accident that occurred earlier this evening involving a charter bus filled with prospective students. They were on their way to visit campus for the April 11 Spring Preview event.

Our hearts go out to those who have been affected, and we are here to support them, and their families, in any way possible.

The bus was travelling on Interstate 5 near Orland when it collided with a FedEx truck. We are in contact with law enforcement in the area, and are being told of multiple injuries.

Families of students who may have been affected may contact University Police for more information or guidance at (707) 826-5555. 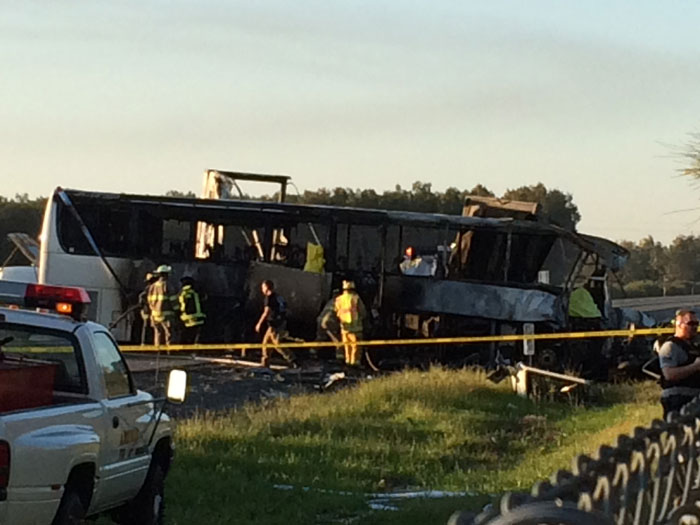 In this photo provided by Andrew Hutchens, authorities work the scene where nine people were killed in a three-vehicle crash involving a bus carrying high school students on a visit to a college, Thursday, April 10, 2014, near Orland, Calif. Authorities said it is not yet clear what caused the crash but that it involved a tour bus, a FedEx truck and a Nissan Altima. Andrew Hutchens / AP