The dog, named Lad, arrived at the hospital Tuesday where he underwent blood tests -- to ensure he has no other underlying health issues -- before the operation.

According to Pat Bailey with UC Davis News Service, doctors at the hospital said the general outlook for reconstructive surgery is good.

"He seemed to be in very good general health," said Bailey.

Lad was brought to UC Davis by Arrow Fund, a Kentucky-based non-profit organization that provides medical treatment to abused, tortured or neglected animals. According to Arrow Fund, rescuers found Lad shot in the mouth last month in an area about two hours outside of Louisville, Kentucky.

The wound was so infected that doctors decided to remove the lower jaw -- leaving the collie with only three teeth on one side and two teeth on the other.

It was estimated that Lad had been shot about six days prior to being rescued. He was also severely underweight at about 41 pounds. Authorities launched an investigation to find out who shot the collie and as of early March, they announced that charges are expected to be filed in the case.

Arrow Fund launched a fundraising campaign for Lad's care and transport to UC Davis for surgery.

Staffers at Arrow Fund described Lad as a "sweet dog" and thousands of people have rallied behind him. Posts on Arrow Fund's Facebook Page have garnered thousands of likes and shares.

If blood test results are clear, Lad can have surgery in about 10 to 14 days.

UC Davis veterinarians have been known to provide reconstructive surgery for canines in need. Last year, they treated Kabang, a shepherd-mix from the Philippines who was credited for saving two young girls from a motorcyle. Kabang lost the top of his snout in the incident. 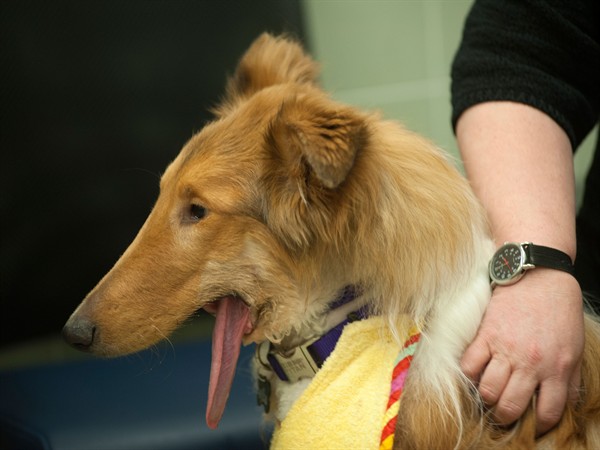 Lad the dog looks around the examination room as Rebecca Eaves of the Arrow Fund Lisa Sullivan holds him in place during an examination. Lad, a Rough Collie, is at the William R. Pritchard Veterinary Medical Teaching Hospital at UC Davis. Lad lost his lower jaw to a gun shot. After an examination, doctors plan to do work that will improve the dog's life. Photo taken on Monday, March 17, 2014. Gregory Urquiaga / UC Davis