One of the year’s big budget fights at the California Capitol is over how the state should save money for a rainy day. Governor Jerry Brown and legislative Democrats want to replace a budget reserve proposal already scheduled for the November ballot with a plan of their own.

Each proposal would build a reserve of about 10 percent of the state’s general fund – but in different ways.  The November ballot measure stems from the 2010 state budget deal.  It would put one-and-a-half percent of state revenues into the rainy day fund – plus any extra money above a 20-year average. To Republicans, it's the best option.

“We voted on this thing, and it had broad bipartisan support.  And now that there’s a new dynamic up in this institution, they seem to be moving the goalposts on us, and that concerns us a bit,”  says GOP Sen. Tom Berryhill.

Democrats say that measure has too many flaws and they want to replace it.  Governor Jerry Brown’s proposal would set aside volatile capital gains revenues any year they come in higher than normal.  It would also create a separate rainy day fund for schools.

“The governor believes that we’ve crafted a proposal that gets to the heart of the issue, in terms of for long-term fiscal stability in the state, how do you deal with protecting schools; how do you deal with capital gains; and we think our proposal is an improvement over what’s on the ballot.” says H.D. Palmer with Brown’s Department of Finance.

In order to swap the two measures, the governor will have to convince at least one Republican that his alternative isn’t too weak.  That’s because Democrats no longer hold a supermajority in the state Senate. 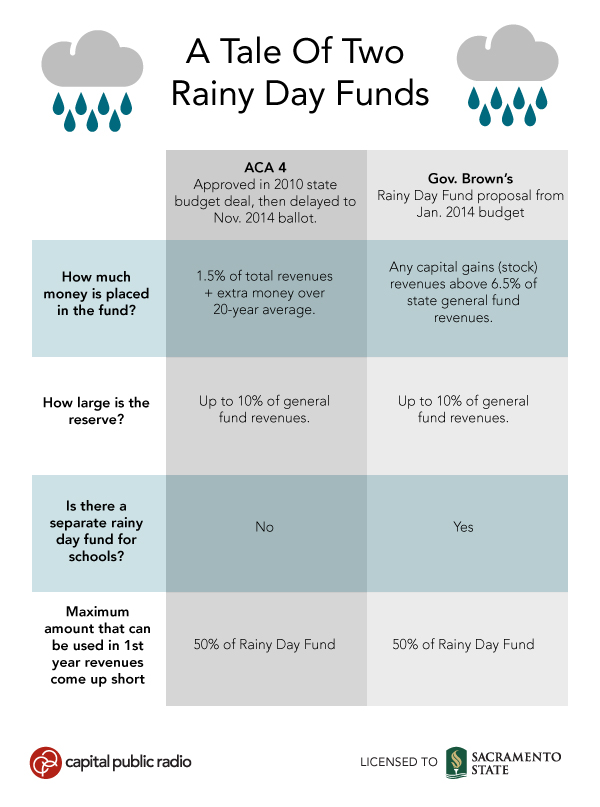