Skipping school can mean a lot more for students than just failing a test. California Attorney General Kamala Harris says it can cause kids to fall behind and ultimately drop out of high school.

Harris joined state lawmakers in introducing a package of legislation designed to curb truancy among elementary school students. She says showing up in class is critical to a student’s future success.

“If a child, at the end of third grade, is not at reading level, they are four times more likely than other students to be a high school dropout," Harris says.

Harris’ office estimates one million elementary students are truant each year, with a quarter of those missing at least 18 days of school. Truant students cost school districts more than $1 billion a year in lost state funds.

Among other things, the bills would help districts comply with truancy tracking requirements and work with parents to address causes of truancy. 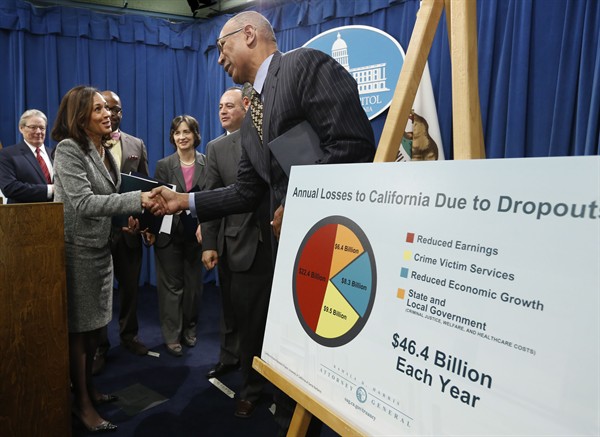 Attorney General Kamala Harris shakes hands with Assemblyman Chris Holden, D-Pasadena, one of the lawmakers who is carrying a bill that Harris is backing to help reduce truancy in state schools following a Capitol news conference in Sacramento, Calif., Monday, March 10, 2014. The bills would write into law recommendations from a report done by Harris' office that would require school districts and the state to do a better job of tracking students who miss class. Harris said the legislation would help officials find ways to get truant students back in school. Also seen are Sen. William Monning, D-Carmel, left, and Assembly members Isadore Hall, D-Compton, second from left, Joan Buchanan, D-Alamo, third from left, and Raul Bocanegra, D-Los Angeles, third from left, who are all carrying other pieces of the bill package. Rich Pedroncelli / AP