Some fireworks and political theater on the floor of the California state Senate Thursday, as Republicans sought to force a vote to expel Sen. Rod Wright (D-Los Angeles) and Democrats turned the motion aside.

A jury convicted Wright of perjury and voter fraud a month ago.  But Wright’s fellow Democrats have declined to call for his resignation – or even his suspension – as Wright asks a judge to overturn the felony convictions.

That drew an angry response from Republican Joel Anderson: “The issue before you today is does the minority opinion have a right on this floor – or will Senate leadership bully us off?”

Senate Leader Darrell Steinberg pointed out Wright has taken a leave of absence until his case is resolved - and that an expulsion could not be undone if the judge overturns Wright's conviction.  Steinberg said fears that he would allow Wright back on the floor without a judge overturning the conviction were unfounded.  “That is insulting.  I give you my word on this floor – and when has my word not been good?  This will not happen.”

Democrats successfully shunted the expulsion motion to the Rules Committee by a 21-13 vote – without any votes to spare.

As it turns out, not all Republicans would have supported Wright's expulsion, if Democrats allowed the question to come to the floor. "We should give him the benefit of the doubt," Senate Minority Leader Bob Huff (R-Diamond Bar) told reporters after the Senate adjourned Thursday.  He said it's still possible the judge might overturn the jury's conviction.  "That’s my personal opinion.  That’s not shared by all members of my caucus."

ORIGINAL STORY (AP) - Democrats managed to derail Thursday an attempt by Republican lawmakers to expel a state senator who was convicted of perjury and voter fraud.

Republicans Joel Anderson, Steve Knight and Andy Vidak said Wright's conviction merits expulsion, not a leave that will allow him to continue receiving his $95,291 annual salary.

Democrats say Wright can keep his seat until a judge enters the verdict at his sentencing. They used a parliamentary maneuver to send the Republicans' Senate Resolution 29 to a committee. 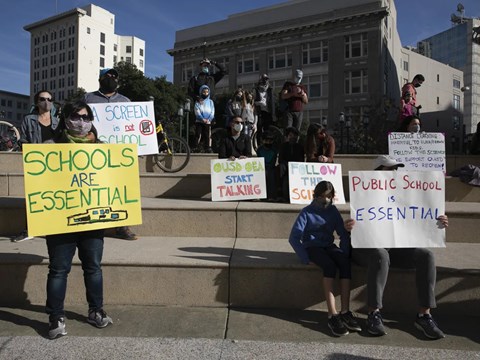 Who Has The Power To Reopen California Classrooms?