"The cockpit illuminated by a laser. Instinctively, he looked and the laser hit him in the eyes. So, he had temporary blind ness real quick, but he used the camera system that's on the airplane which has low-light lenses -night vision- and they were able to find the suspect shining the lense."

The FBI's program will combine a billboard and public service campaign with rewards of up to $10,000 dollars for information that leads to the arrest of someone shining a laser at a plane or helicopter.
Robert Hamilton with the Air Line Pilots Association says he has been temporarily blinded by laser strikes five times while flying.

"I would best describe it as if you were in a completely darkened environment and your eyes were very much acclimated to the night and someone set off a flash camera right in your face. But, unfortunately, this sometimes can last for a much longer duration so it would almost be a continual flash like that for in my experience up to 45 seconds."

Targeting an aircraft with a laser is punishable by five years in prison and a $250,000 fine. 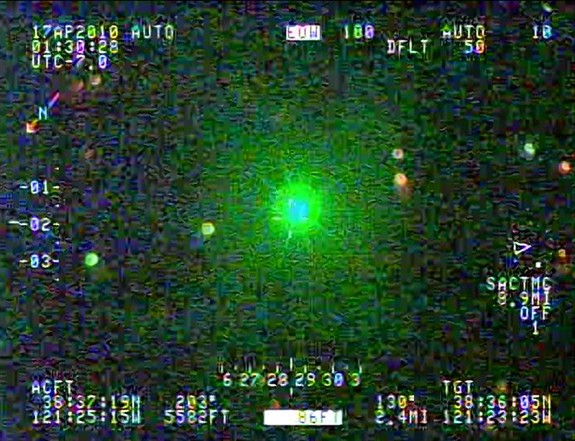 A simple laser pointer when shined into the night sky can be blinding for pilots.