More than 60 adults shuffled into Glen Cove elementary school Tuesday night to exchange ideas about how the city should spend $2.4 million dollars.

“Are you happy with the way the government is spending your money?,” asks Participatory Budget Steering Committee Chair, Lynda Daniels, to the crowd.

"Do you think you can do it better?," she asks.

The proposals put forward in assemblies like this one over the next six weeks will be considered over the following nine months and eventually put before voters in October.

City employees provided an orientation, including parameters for the projects. Proposals have to have a public benefit, and be a one-time expenditure. 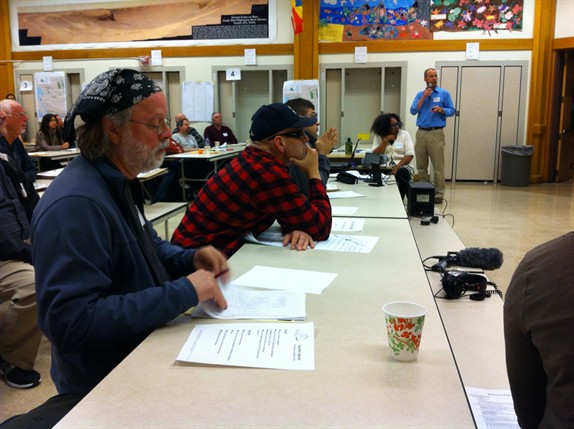 When the crowd breaks up into small groups, the ideas start flying.

One man wants to improve street lighting in a Vallejo neighborhood where there are schools and an increasing crime problem.

Another man resurrected an idea from last year: A "Venice Beach" style outdoor fitness area at the waterfront.

Someone else wants to see a day-use area for the homeless, and another wants to renovate a vacant historic building. 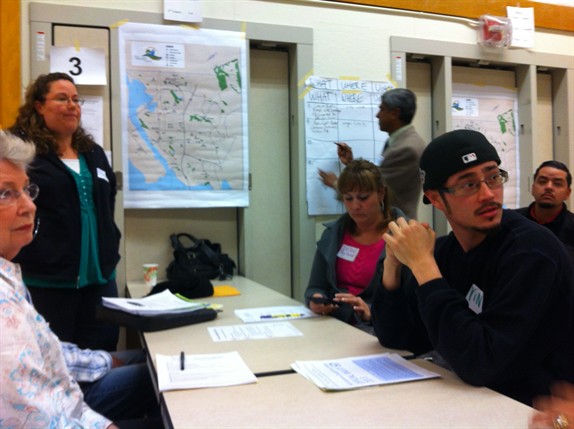 When the brainstorming ends, people signal support for their favorite projects by sticking green dots on large white sheets of paper. Small groups report back to the larger group about the most popular ideas; Public arts events, better use of the water front, and creation of a bike tour and expo.

Carl Chaker is new to the process this year. Last year he voted but didn't participate in the assemblies to brainstorm ideas.

“I...saw some of the ideas and I really liked them, and I thought maybe I could be part of the process next year so that some of the projects that are proposed could more directly benefit my more immediate community,” says Chaker, who has lived in Vallejo for two and a half years.

The funds at stake are a tiny part of the overall budget. The money and the process is part of a one percent sales tax that was voted in to improve services after the city’s bankruptcy.

But that opportunity to help design the budget can be taken away by the city council.

“If there’s not support for this project, you will lose it if you don’t use it,” says Councilman Robert McConnell.

“The relationship with the city is a lot more transparent and so the people have let the government know that 'Hey, we’ve gained knowledge through this process of participatory budgeting,'" says Lynda Daniels of the steering committee.

"The more knowledge we’ve gained, the more we’re willing to question what goes on and take a part in it,” she says.

Some of last year’s projects are already being implemented. The proposal that got the most votes last year? Fixing potholes. This year the city will spend more money to repair them.