Listen
/
Update RequiredTo play audio, update browser or Flash plugin.
The Sacramento Housing and Redevelopment Agency has joined with the Sacramento Urban League and the Sacramento Employment and Training Agency.

La Shelle Dozier is with the City. She says anyone who has received job training and is receiving housing assistance will soon be listed on a city-run website for prospective employers to see.

"Any of the federal funding that we actually contract with -and we do quite a bit of that in terms of construction for different jobs and housing programs  that we have," Dozier says, "we really are going to require those employers to look to this web site first and to really draw upon our local resources and employers before they start going outside."

The creation of the new program, called First Source Sacramento was announced today at a job Fair in Del Paso Heights where the unemployment rate is above 25 percent.
Reginald Young is looking for work. He's encouraged by the new program.
"I think it's a great idea and hopefully further on in the future, we can get more of these projects and assignments going," Young said.
The website for employers is expected to be ready March 10. 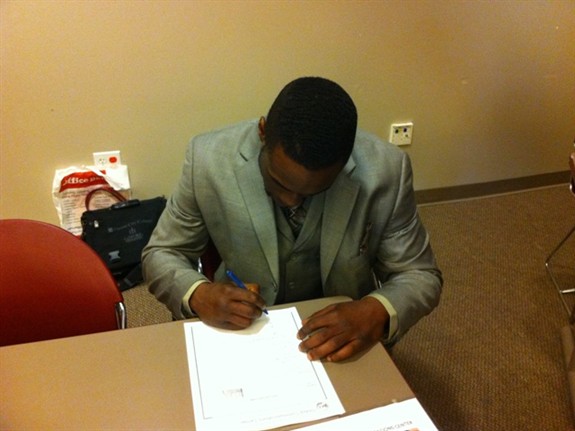 Reginald Young is a 27-year-old professional boxer who is considering a career in law enforcement after he retires from the ring. He attended a job fair in Del Paso Heights in an attempt to acquire information about starting on a new career.