The forecast in the annual "Sacramento Business Review" is for two percent economic growth in the region.  The review forecasts a five-to-seven percent increase in housing prices and higher occupancy rates for retail and industrial spaces.

The report co-author, Jason Bell, says it appears lending activity is increasing after years of stagnation, but prospective borrowers are moving cautiously.

"The demand for credit -people wanting to go out and borrow- hasn't been very high," says Bell. "It hasn't corresponded with the low interest rates.  We're wondering if it's a paradigm shift where people are so impacted by what happened in 2008, they're reluctant to lever up their balance sheets, go out and spend again."

One business that is expanding into downtown Sacramento is the Dailey Method - a studio combining yoga, pilates, and ballet.  Owner Sandra Lemos says the City's efforts to encourage small business creation have shown results.

"I'd say the permit process has been easier for us than in other locations that we've opened up in,” she says.”The City's been great to work with in that regard and just having the support of the local business and people just eager to see a small business open up and succeed just with word of mouth  other different organizations." 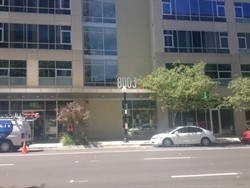 The Dailey Method entered a contest for small business sponsored by the Sacramento Downtown Partnership. The $100,000 it won is being used to cover start up costs.

Lemos says she plans to open the doors to the new studio on J Street February 8.

Robert Emerick plans to open Empress Tavern in the basement of the Crest Theater on K Street later this year. In one indication of better credit climates, he says he was able to finance the tavern.

"When I purchased the Crest Theater complex, what, about three years ago, banks for the most part were not lending,” he says. “It was very, very difficult to get financing shaped for real estate."

The tavern will likely be the second business Emerick opens this year. He opened Mother Restaurant yesterday.

He says what was supposed to be a "soft opening" for a limited number of diners at the vegetarian restaurant turned into a full house.

The report notes a worrisome trend continues in the high number of seasonal, unpaid, or self-employed workers.

Forecasters say the regional economy will likely be strengthened by increased domestic oil production and a weakening Chinese economy.