Listen
/
Update RequiredTo play audio, update browser or Flash plugin.
Mustard Seed School Director Angela Hassell says there are 35 children at the school, but there are 300 who rotate in and out every year. She says the bikes could have been  given to individual students. But, the school decided more children would benefit if the bikes stay at the school for use by current and future students.

"Sometimes when they go home, kids aren't able to hang on to them very long because they're moving around from one week to the next," says Hassell. "They move into a shelter, where they don't have space to store it, the bike disappears, or given to a friend, something like that."

Eleven-year-old Joshua Land understands the idea behind keeping the bikes at school.

"I had a bike when I lived in Oak Park," he says. "But someone rode up, hopped the gate and they stole my wheels off of it."

The children now at the school will be able to ride the bikes during safety training demonstrations called bike rodeos. Hassell says her goal is more access during the rest of the year. She says she is looking for a suitable space.

"I would love to have once a week where we could take the kids out on bikes for their P.E. class and be able to use the rodeo as it happens to enforce the safety things."
Eight-year-old Curtnisia Amos is excited about going through a safety class.

The donations are part of a Sacramento Police program to teach bicycle safety.  The program is funded by the California Office of Traffic Safety.
The bikes were donated anonymously. The police also brought pizza for a lunch time party. 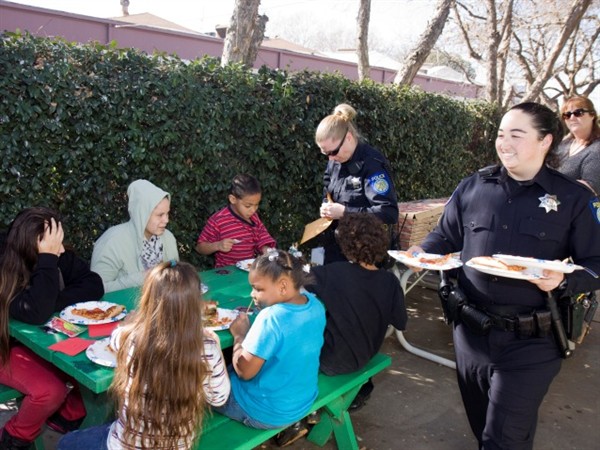