California Board of Ed Will Make Multi-Billion Dollar Decision

The board will consider rules that dictate how school districts can spend money targeted toward low-income and non-English speaking students.

Several interest groups want the rules tightened up, to ensure the money isn’t squandered. Samantha Tran is with the advocacy group Children Now. She says some district wide spending could be good.

“You know you want to do things at scale, so those can be really powerful," Tran said. "The challenge is if those aren’t targeted prevention and intervention services, it could get watered down.”

Administrators prefer fewer restrictions, so they can spend the money more easily. They acknowledge that could include teacher pay raises. But Wes Smith with the Association of California School Administrators said students will still come first.

“We’ve been doing some workshops all across the state to provide our members with suggestions, tools, and what have you, so they can meet the needs at the bargaining table, while prioritizing the needs of students," he said.

Governor Jerry Brown is proposing a budget of about $55 billion for K-12 education in the coming year. 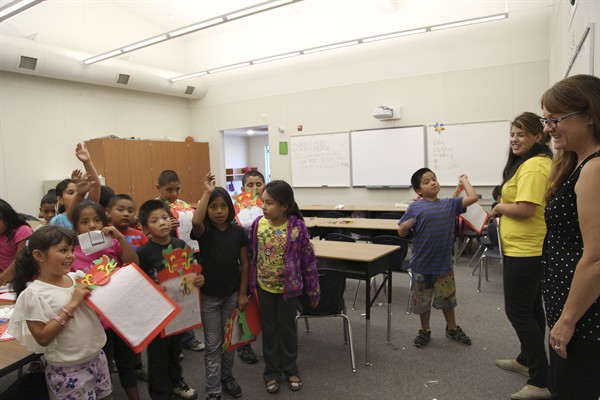 In this June 26, 2013 photo, students show off their assignments at the end of the school's summer program at Jefferson Elementary School in Sanger, Calif. The Sanger Unified School District, which was once named as one of the lowest performing in the state, is now known for its success in educating its predominantly Latino student body: It graduated 94 percent of its Hispanic students in 2012, 20 percent more than the state average. Gosia Wozniacka / AP