Last week, a Reddit post by a man, who claims he was charged more than $55,000 for an apendectomy at Sutter Health General Hospital in Sacramento, went viral.

The post, which was picked up by national news and swirled around social media sites, garnered tens of thousands of comments and sparked debate about the high cost of care  in the United States.

I think you can see how outrageous some of these costs are. Such as the Recovery Room that I was in for maybe two hours. Or the Room and Board that I had for one night. Or maybe the $4,500 worth of anesthesia they supposedly used on me.

Pat Palmer, founder of the Medical Billing Advocates of America, says the situation described by the Reddit poster is a common one. Palmer explains the appendectomy bill in question is actually just a summary and hides additional charges that a patient could dispute.

For example, the hospital charged the man about $6,000 for medical and surgical supplies. But, Palmer says, routine supplies and equipment are not billable items and would be factored into the price for the operating room -- already a separate charge of about $16,000. Essentially, the patient might be paying twice for certain equipment, she says. 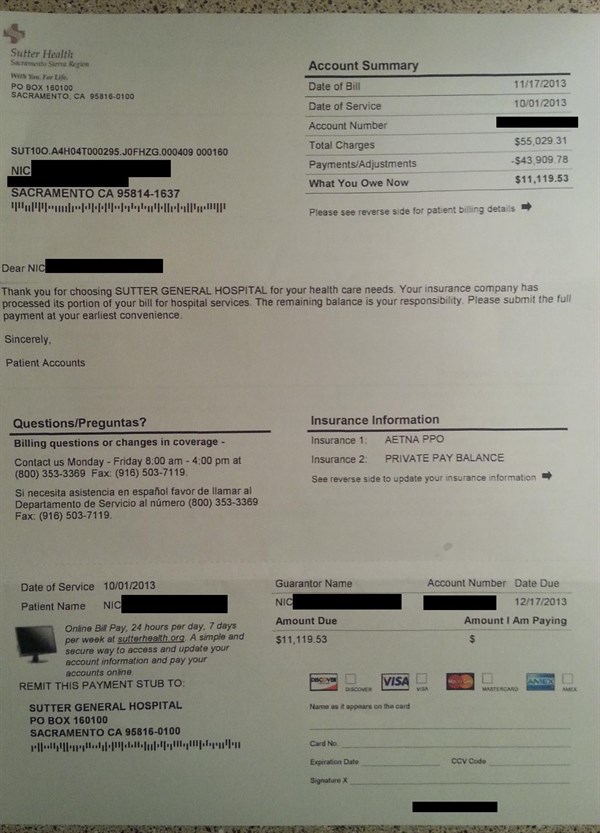 In response to the post, Sutter Health released a statement saying there are many factors contributing to the cost of care including having to pay for patients who cannot pay for themselves, the investments needed for facilities and salaries for employees.

In addition, a Sutter Health spokeswoman told the Sacramento Business Journal that health care pricing is a complex issue that cannot be fully explained in social media.

Sutter Health does acknowledge that billing structures need to be improved.

Sutter Health agrees that an improved billing structure is needed in our nation’s hospitals—where published charges are more closely aligned with actual costs. And a more straightforward pricing system is only possible when reimbursement from government-sponsored patients covers actual costs.

Palmer advises consumers in a similar position to ask the hospital for an itemized bill and possibly enlist the help of a medical billing advocate to challenge the charges. An advocate would charge a percentage of the savings that a patient might get in the dispute.

Other Reddit users chimed in with their own nightmare experiences with medical bills.

Bigpulve: I had the unfortunate luck to have cancer when I was 20. I had no insurance due to taking a year off from college, so my parents didn't cover me any longer. By the end of 2009 I was looking at 150k of bills, praying Medicaid came through. They did and paid everything in full. Though cancer stuff doesn't stop when treatments over. After 09 I still racked up 50k in bills from scans, visits, blood work etc. I was forced to declare bankruptcy at 24 due to it.

ABC News, which picked up the story about the Reddit post, said researchers from the University of California San Francisco conducted a study in April and found that an appendectomy in the state can cost anywhere between $1,529 and $182,955. The researchers told ABC News that the huge variation in costs depends on the hospitals.

A new study by National Nurses United, a nurses' union, found some hospitals charge hundreds of dollars more than the actual cost of services provided.

On Monday, it was announced that a petition to put a healthcare pricing initiative on the ballot is circulating. The measure would prevent hospitals from charging more than 25 percent above the estimated cost of services provided to patients.