For our survey of Sacramento shows, we’ll take our cue from A Christmas Carol’s Ghost of Christmas Past… after all, this is pretty much a nostalgia trip. So close your eyes, hold on tight, and don’t touch that dial – we’re off. 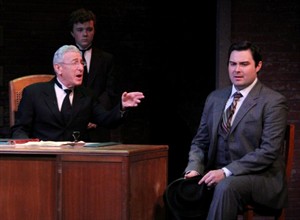 Our first stop is the Sacramento Theater Company, which is revisiting the 1946 film classic and holiday favorite “It’s A Wonderful Life” –But be advised – this version has been retrofitted as a musical.

The add-on songs are forgettable. But the actors put their hearts into their roles, especially Sacramento’s Jerry Lee, who does well as George Bailey.

So I’ll get into the spirit of the season and give this show a passing grade, although I could have done without the tunes. But we have four shows to glimpse in this little tour, so let’s move on.

And now we’ve touched down at Capital Stage, where they’re doing a play based on the sardonic humor of David Sedaris, specifically his famous essay about his miserable job as a department store elf.

It’s a moody monologue about the dark underbelly of holiday shopping madness, with actor Aaron Wilton prancing about in a festive, forest green tunic. 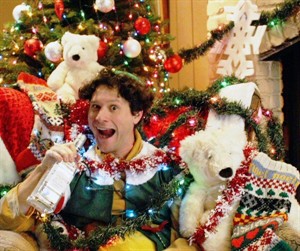 "During dress rehearsal, you go by your elf name. The others chose names like Jingle and Frosty. They take the children by the hand and squeal with forced delight. They sing and dance and behave like cartoon characters come to life. It frightens me. My elf name… is Crumpet.”

Wilton works the crowd like a champ, and the show is well structured, making this one of the better versions I’ve seen of this snarky Christmas take-down. But our time draws short, we must move on…

…to the B Street Theatre, where they have two shows. For grown-ups, playwright/director Buck Busfield offers a play expanding on a one-act comedy he wrote nearly two decades ago. It opens with a blind date that gets off to an awful start. 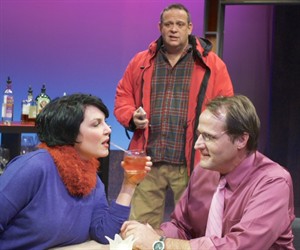 Elisabeth: Did you see the man who just left the house?

Elisabeth: Did he pass you a note? Tap his feet in a rhythmic way? Do anything that might be construed as communication?

Kurt: He asked me a question.

Elisabeth: What was the question?

Kurt: He asked me if the little girl that the based ‘The Exorcist’ on grew up around here…”

Clearly love at first sight. This kind of sassy romantic comedy put the B Street Theatre on the map in the ‘90s. Seeing it again now – with three of the original actors – is a pleasantly nostalgic blast-from-the-past. 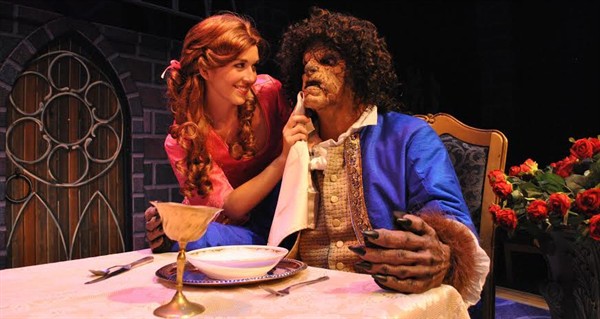 ...A Family Series production of “Beauty and the Beast” also at B Street -- and this is a fresh adaptation, not the Disney version. You know the story… the Beast falls for the beautiful girl Belle. But he’s too shy to court her. So his guitar-strumming servant, who provides advice and comic relief, finally goads the Beast and Belle to the dance floor. The Beast doesn’t realize that he now needs to gracefully take Belle’s hand, which initiates this exchange.

Beast: “I thought we were going dance?”

Servant: “She is waiting for you to invite her you big dummy.”

I’m with the kids – this “Beauty and the Beast” is a delightful little gem.

So what’s the take-away from our little tour? Think of these four holiday shows as comfort food – each is a fresh encounter with something familiar and satisfying that folks have applauded in years past. Of course there will be edgier, more innovative shows in the New Year – but for now, just lean back and enjoy one of these comfy old favorites.