Hahn: neighbors smelled gas around house where suspect was holed up. It was a major concern for us.

Hahn: suspect ran from officers a few days before shooting.

Hahn: Suspect had gunshot wound to hand and scrapes to face.

Hahn: Suspect being charged with parole violation and numerous counts of attempted murder.

Hahn: No evidence to believe that ICE agent was shot by Roseville PD or himself

Walstad: Suspect shot through wall at officers inside house

Hahn: only one Roseville officer still in hospital. All others released. 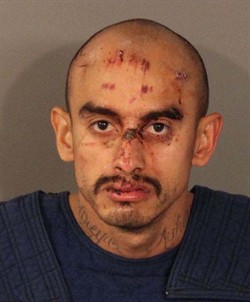 Roseville Public Safety reports that shooting suspect Sammy Duran is to be moved to the Placer County Jail today from the Roseville Jail.

One Federal ICE agent was shot in the incident that began Friday afternoon, and three other police officers were injured by bullet shrapnel during the manhunt and standoff, which lasted nine hours and involved 10 agencies.

The shelter at Maidu Community Center has been closed. All displaced residents have left the shelter.

Roseville Public Safety reports that a SWAT sent in a robot to establish communication and  give the suspect orders to come out. At 12:30am, the suspect came out from house unarmed, and was taken into custody.

The City of Roseville Twitter feed reports that police lost communication with the suspect at 10:45 p.m. Friday.

SWAT sent in a robot to establish communication and give suspect orders to come out, and at 12:30am, suspect came out from house unarmed, and was taken into custody.

Per procedure, the suspect was transported to a local hospital for medical clearance, then to Roseville's jail for booking, then to Placer County jail.

Roseville Public Safety has confirmed that the suspect is in custody.

Sammy Duran surrendered to authorities at 12:30 a.m. according to the city's public safety Twitter feed.

Roseville Public Safety reports that the perimeter of the area where the standoff with Sammy Duran continues has been tightened. The inner perimeter is 5th Street south between Veron and Riverside, and the back of the BMX track north of Dry Creek.

Roseville Police say they are "in-and-out" of negotiations with Duran, and "as long as we're talking, they won't stop."

Roseville Public Safety reports that a Roseville police officer wounded by shrapnel from bullet fragments earlier today has been released from the hospital.

There are no continuing orders for school lockdowns. Five schools were earlier put on lockdown when the incident began.

Buses are picking up displaced residents at 1600 Vernon St (corner of Vernon & 6th).

Roseville Public Saftey reported via twitter that they suspect was confirmed alone in a house near 6th Street and Hampton and communicating with the police.

The Roseville Public Saftey twitter also confirmed three Rosville Police Officer were injured, one is in serious condition, two are stable. The ICE agent is also in stable condition.

Riverside Ave. is still closed and the public is advised to take alternate routes.

Police agencies have the area contained and believe they know where he is.

The suspect is, Sammy Duran, a parollee wanted by police for about a week. Duran was contacted by ICE agents earlier this afternoon and the interaction resulted in gunfire. The suspect allegedly shot an agent in the leg. A chase then commenced across Roseville.

Around 5 p.m. shots were fired and other police officers were injured from the shrapnel. All officers are being treated at Sutter Roseville Medical Center.

The ICE agent who was shot in the initial contact is reported stable.

"The initial investigation was done by roseville and ICE," said a Lt. Cal Walstad, Roseville Police Department. "We have a tight perimeter set around the location where we have him located."

"We have a lot of officers that responded to the area," said Walstad. "We have multiple teams who responded at this time."

Sutter Hospital and the City of Roseville confirmed multiple officers are being treated with injuries related to the manhunt.

Update: 5:38 p.m. - City of Rosville Releases a Photo of The Suspect

The city of Roseville released the identity of the suspect. The hispanic male has been identified as Sammy Duran, pictured below. 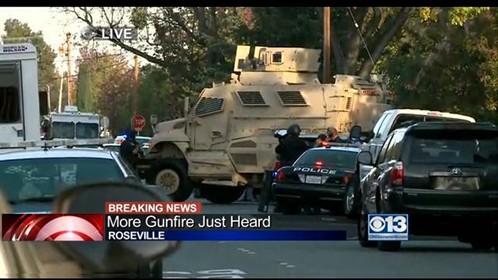 According to the Associated Press, ICE spokesperson Virginia Kice provided this statement:

A special agent with U.S. Immigration and Customs Enforcement's (ICE) Homeland Security Investigations (HSI) was shot Friday afternoon shortly after 3 p.m. while conducting a joint enforcement action with investigators from the police department in Roseville, Calif. The special agent was rushed to a local hospital where he is now reported to be stable and alert.  Additional HSI agents are en route to the incident scene and will be assisting the Roseville Police Department with the ongoing investigation.

Sacramento County and Placer County Sheriffs are joining Roseville and Citrus Heights Police in a manhunt for the suspect. No one else has been reported hurt.

Sacramento County Sheriff's Sgt. Lisa Bowman said in a telephone interview that she does not know the condition of the officer.

She says deputies were dispatched shortly after 3 p.m. Friday, when Roseville police requested help for an officer-involved shooting. KCRA-TV showed aerial images of dozens of law enforcement officers converging on a neighborhood in Roseville, about 20 miles northeast of the state capital.

Calls to Roseville police were not immediately returned. The city's Twitter account posted messages warning residents to stay inside and saying the suspect is armed and dangerous.

Bowman says sheriff's agents and canine units were helping in the search.

The situation is unfolding in the area of Windsor and 6th Street, the public is asked to avoid this area and take shelter.