Mary Hill has been accumulating prescription drugs in her Oakland office.

“I have here morphine from people who have cancer, I have vicodin…methadone,” says Hill, while rumaging through two bags of pill bottles and containers.

Hill is a social service coordinator at a retirement home. She’s been storing leftover drugs from residents who have died, or don’t know how to get rid of them safely.

Hill doesn’t want the drugs, but she doesn’t want them to get into the hands of recreational users, or into drinking water. If she drives away with the drugs, she could be stopped by police for possession of drugs that don’t belong to her.

“We don’t want to put it in the garbage bin outside, they can’t flush it, so I don’t know what to do with it. I don’t know,” says Hill.

A couple dozen locations, including pharmacies, police and fire stations provide bins for the collection of everything from narcotics to inhalers.

“Our program that’s in place just isn’t extensive enough. It needs to be much more convenient,” says Nate Miley, an Alameda County supervisor. He authored a county ordinance that requires drug makers to design and pay for a comprehensive drug take-back program.

"This is not something taxpayers should be paying for," says Miley. "It seems like when products have reached their lifecycle, it should be the responsibility of the manufacturers to have a way of properly disposing of those products." 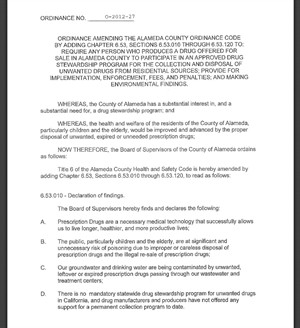 Alameda County’s law is the first “producer responsibility” drug take-back program in the country. States and the federal government have considered similar measures, but none has passed.

"We can’t wait for Sacramento, we can’t wait for the federal government. We’re hoping that other counties will see what we’ve done and have the courage to follow our lead," says Miley.

In fact, some California counties are considering similar laws. In Seattle, the King County council has passed an ordinance like Alameda’s.

"A waste disposal authority is something that’s not in the institutional confidence of manufacturers," says Mit Spears, General Counsel for Pharmaceutical Research and Manufacturers Association or PhRMA.

The trade group challenged the constitutionality of the Alameda County ordinance in federal court, and lost. Now it has appealed.

"Local governments have been in the waste disposal business for a long, long time and...they know more about how to take care of their citizens and what the needs are," says Spears.

He says PhRMA is not opposed to take-back programs. But if pharmaceutical companies have to pay for them, the costs will be passed onto consumers.

“We think it’s unfair to basically put upon a Medicaid or Medicare beneficiary in Tennessee a higher cost on their product so that we to pay for a state-of-the-art take back program in Alameda California," says Spears.

But Heidi Sanborn of the California Product Stewardship Council has another question.

Sanborn says pushing manufacturers to be responsible for their waste makes them rethink production.

"If they have an economic incentive that drives them to redesign and rethink the product, what it’s made out of, how it works, how long it lasts, then we’ll see hopefully greener design. And that’s ultimately our goal," says Sanborn.

Alameda County moved its deadline for drug companies to submit disposal plans to May of next year.

Supervisor Miley says they county is also helping industry with the possible creation of a separate organization to administer the drug take-back.

He says that could help prevent an eventual challenge of the new law before the Supreme Court.