Wildlife Services: Salmon OK This Year But 2014 a Concern

The news for freshwater fish in some smaller rivers with reduced flows is not as good.  The upper Merced and Tuolomne are very low.  Rivers without dams, like the upper Merced are lower than normal and freshwater fish are forced to find whatever pools and refuge are available.
The salmon forecast is good for the lower Merced river below the Crocker Huffman dam. The U.S. Fish and Wildlife Service reports the best return in five years for salmon in 2012 and expects a similar return this year.
This is the second dry year in a row.  Tomorrow, the California Department of Water Resources will host the first in a series of discussions and training seminars to be prepared should there be a third dry year in a row. 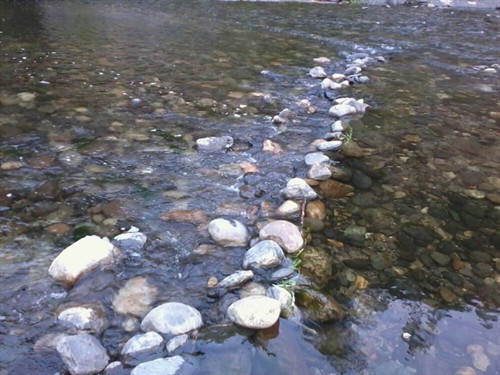 The upper Merced River north of Mariposa was as of September 1, 2013 warm and shallow -not conducive to healthy fish habitat.
Follow us for more stories like this