California’s first permanent building, Sutter’s Fort in Sacramento, will be closed to the public for the next six weeks.

The rest of the park grounds and buildings will remain open during the renovation.

The building is undergoing a renovation that includes a new roof to help make it less susceptible to damage from earthquakes.

Sheets of half-inch plywood will cover the beams on top of the 170-year old building. The  California Department of Parks and Recreation says the materials are part of the plan to keep the building from shaking during an earthquake.

“That half-inch- that’s going to go up on top of the existing roof and then the new roof will go on top of that," says project manager Gary Smith.  "So, that will act as a seismic diaphragm.”

In the 1840’s, miners and European settlers could spend a night on the floor upstairs by renting a seven-by-three foot space.  Sutter Fort State Park says renters and then construction crews who renovated the building in the 1890’s left their mark –sometimes with the year they were there.

“So I guess in a way it has become historic in and of its own right, now," says the park's  Director of Educational Programming, Steve Beck.  "It may have been graffiti at one time, but now it’s historic graffiti and worth preservation.”

The upstairs isn’t open to public viewing and the graffiti on the ground floor was plastered over long ago.  But, there’s more in the basement where John Sutter had a pool hall.

The building’s clay bricks and architecture made it unique long after it was completed in 1840.

“In California you either had flat roofs or you had roofs that had a single peak and just like a lean-to almost kind of structure, whereas this one had a peak to both sides," says Beck.  So they’ve described it as a chalet structure.  These beams are from the 1890’s reconstruction.”

Nearly 300-thousand dollars in voter-approved funds have been allocated for the new roof and for the lower walls of the fort to be stabilized and restored... and whitewashed –on the outside. 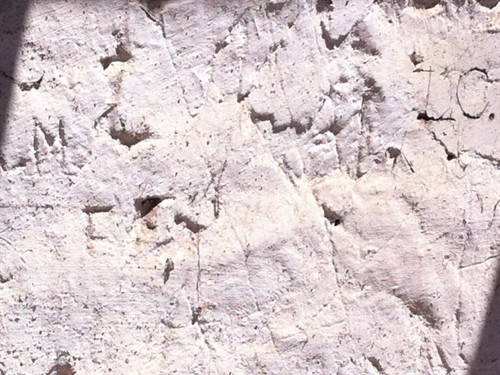