Thousands of years ago a powerful earthquake shifted the ground beneath Lake Tahoe 12 to 20 feet vertically, spawning a giant tsunami.

That’s what geologists believe happened, but they don’t know the details, or the exact magnitude.

“The thing that does have us somewhat concerned here at Lake Tahoe is that the last large earthquake appears to have happened about 4,000 years ago," says Gordon Seitz with the California Geological Survey. "That’s about the average return time.”

Seitz says if it were to happen again the tsunami would have devastating consequences.

“That wave would travel around the entire lake, and because the lake is shaped sort of like a bathtub, it would bounce back and forth off the different shores, for hours,” says Seitz.

The only way to learn more is to go where no one has gone before, 1,000 feet down to the lake’s deepest fault line.

On a barge on the western side of Lake Tahoe, crews hoist a one-ton, 28 foot cylindrical submarine with a crane into the cold water. 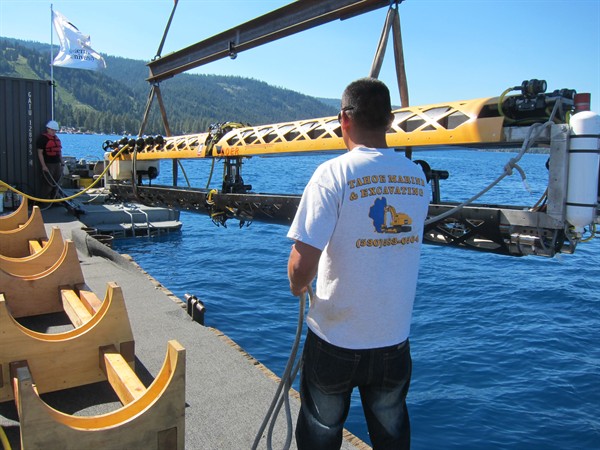 The unmanned sub is armed with high definition cameras, acoustic sensors that provide x-ray-like views of sediments below the lake floor, and other high tech devices.

After hours of tinkering with a ruptured tube, its systems are tested in the water.

The project is the creation of geologist Ross Powell with Northern Illinois University who has been working on it for more than eight years.

The goal is to eventually submerge the vessel into the waters beneath the ice sheets of Antarctica, to study changes associated with global warming.

“It’s going down about 800 meters, about 2,500 feet through the ice," says Powell. "We’ve calculated that, that’s about two empire state buildings, through the ice.” 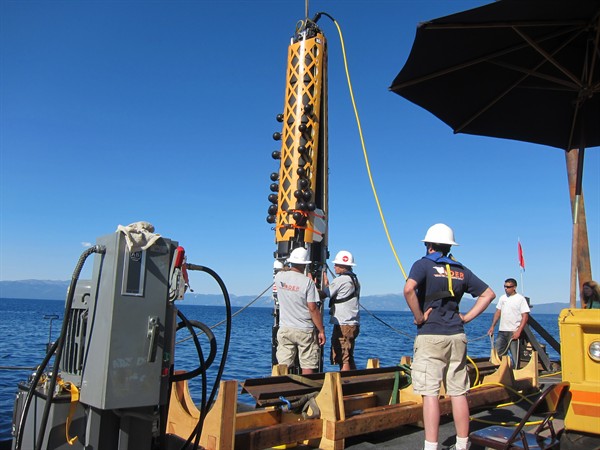 He said through the ice. This sub can collapse like a torpedo to a width of just 22 inches. Lake Tahoe is its big test. Powell waits anxiously for its transformation.

“This is it...we’re going to scissor it now. This is what we’ve been waiting for all day, it’s doing it, wow.”

The sub transforms from a horizontal to a vertical position, successfully. But then…there’s a problem.

"It’s better to find out now then when we’re off in the really deep site and we have to recover it from there. Always thinking positive," says Powell.

After another day of testing, the researchers encountered more problems, not with the submarine itself, but with defective manufactured parts.

Ultimately, the sub never made it down to the lake’s deepest earthquake fault line.

But Powell says he’s confident it will work in Antarctica.

With a little luck, and a little more funding, the sub will come back to Lake Tahoe next summer.

Then geologists can finally see evidence of the last big earthquake and they hope understand what dangers the next one will bring.

More videos of the sub in action 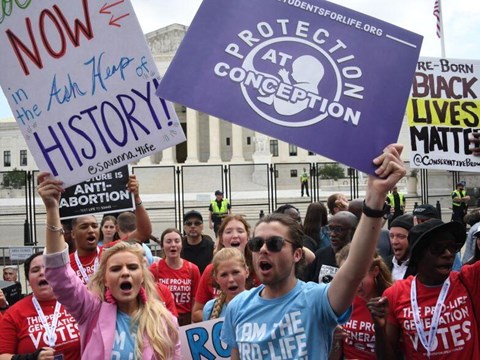