Private judging for wines entered at the California State Fair started today.  More than 2600  wines have been entered in 100 different categories.

Gold-medal award winners will be announced at a special ceremony at the State Capitol in three weeks.  You can taste the gold medal wines at the fair’s wine garden when the fair opens July 12th.

Two hundred volunteers uncork, pour and cart glasses of wine from the wine storage building at Cal Expo to the building where the judging takes place. 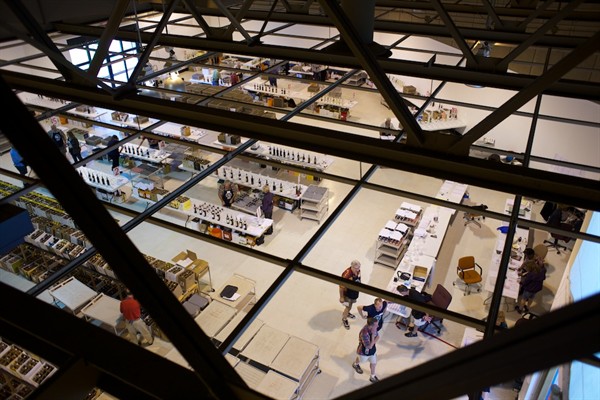 Seventy two judges are in groups of four or five. They first taste a flight of wines grouped together by age, region, alcohol and sugar content.

At table 11, winemaker and judge Nick Goldschmidt says wine number 1983 is maybe the best in its class.

“I like to have a little bit of spice which is there because it means it has a cabernet backbone. I thought it was well-integrated.”

“To me, it stays a little bit stemmy and a little disconnected." said Teichgraeber.  "I don’t know if it really comes together for me. And it’s a little bit hot on the finish too?”

After a brief discussion, the other two judges in the group –Bob Bath and Mari Wells Coyle  agree the wine could be a silver medalist.

"How do you guys feel?" asked Teichgraeber. "I’m comfortable with that. I’m good with that.” they responded.

W. Blake Gray is a wine blogger who judged zinfandels in the day’s first session.  He says this type of community judging is polar opposite to European competitions where the judges aren’t allowed to speak.

Gray says the zinfandels have been lacking…but he has hope for the second session.

“I may have some amazing chardonnay and it may rock my world" he said.  "This has happened to me in competition -some $8 wine that I would have never otherwise tried..”

That Gray hasn’t  found much to like is just fine with the event organizers who urged the judges to refrain from being generous with their scoring.

Paul Wagner is a wine educator and one of six dozen judges.  He says an award-winning wine has a great color and a taste that combines flavors in a way you can’t pick out one particular ingredient. 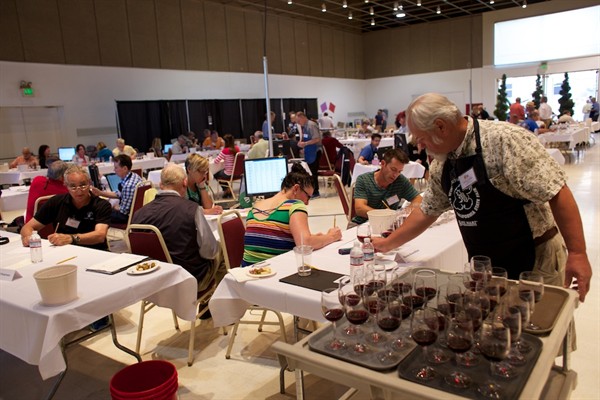 “When people make wine, what you want is a wine that not only has an immediate appeal to you and you say, “Gosh that tastes good,” said Wagner.  "But, the balance element comes into it when you start thinking, “Ok, this not only tastes good now, but the more I drink of it, the more it seems like a really beautiful way to spend some time with a glass.”

The glasses are delivered from storage by volunteers like steward, Allan Robin.  He's celebrating his 20th year helping with the event.  He says he volunteers because it's fun and he likes wine.  But, the fact that he gets free wine is no longer the draw it once was.

"We pick up wine every day after the event.  So, each day we're picking up a case of what's opened. And, then at the end of the competition, we're picking up an additional unopened case for each day that you volunteered." he said.  When asked if he was pretty well stocked for the year, he started laughing and said, "Well, at this point, I think I have 66 cases of wine in my house, at the office...it's like, I don't need any more wine."

Gold medalists will be announced at a special ceremony at the State Capitol June 25.  You can taste all of the gold medal wines at the wine garden when the fair opens July 12th. 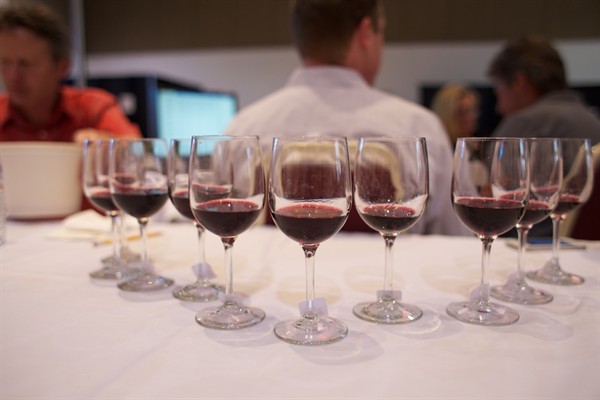