Theatre Review: How We Got On

When I went to the B Street Theatre to see “How We Got On,” I found myself sitting with a mildly apprehensive audience.  (beatboxing in background) The folks in the seats that night were, shall we say, mostly white and old enough to be eligible for AARP membership -- a demographic that tends to be pretty skeptical of rap. I overheard several people saying “I’m not sure I’m gonna like the show we’re about to see.”

But then the play began, and early on came a winning description of the techniques a successful rapper uses in performance:

“Compete with this casual cool kid, you get cancelled…”

Metaphor? Simile? Alliteration? Heck, I was an English major long ago, and I can follow that rhyme scheme. And before 20 minutes had passed, the young black and Latino actors in this show’s cast had the audience – most of them old enough to be the actors’ parents – smiling and clapping along.

“Just throw your hands in the air. And wave them like you just don’t care. And if you’ve got on clean underwear, let me hear you say “Oh yeah.”

Now let it be noted that playwright Idris Goodwin sets his tale in a leafy Midwestern suburb, rather than the inner city. And the story concerns three ordinary high school kids who are trying to produce their own rap tunes using a bulky old boombox with a cassette deck. It’s a sweet, even nostalgic coming-of-age story, as the inexperienced but determined kids struggle mightily to focus their creativity, and convince their skeptical parents and teachers that their music is actually OK. And you know, if this energetically performed, well-written little play only needed a few minutes to win over a classically-inclined, 50-something theater reviewer like myself… chances are you’ll find yourself enjoying it, too.

The B Street Theatre’s production of “How We Got On” continues through June 23rd. 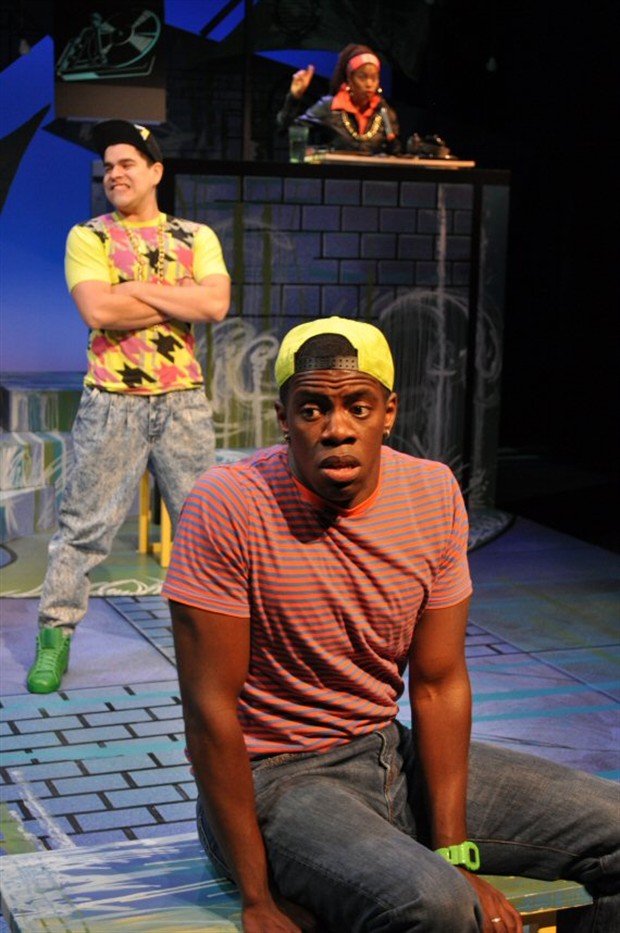