Bands, horses, cars, and, of course, military units marched along the parade route.

John Kelly is with the local Veterans of Foreign Wars post that organizes the parade. He served three years in Vietnam as an Air Force Ranger.

“I just participate in this stuff, I believe in it,” he says. “And I believe in all the guys, even to the guys today. I think it’s something. I take my hats off to the younger generation that’s taking over. And there doing a wonderful job for us. And that’s why we’re here. We represent all those kids that are out there.” 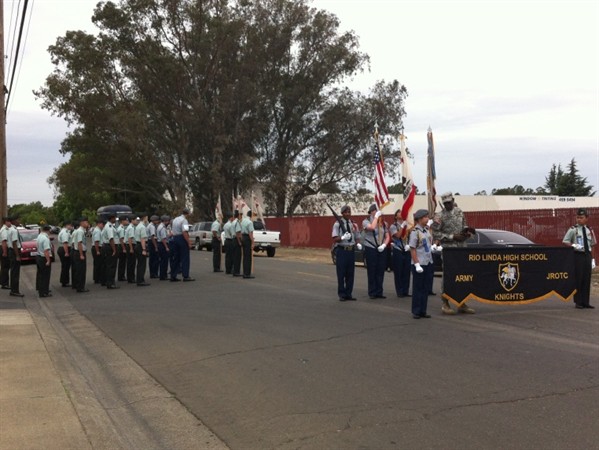 Kelly says the parade has grown steadily over the years. He says the goal of the VFW is to make the entire day a celebration that people will remember.

Among the parade goers was Gloria Ayala whose grandson was marching with his ROTC unit. She says her family has a long history of military service. Her father survived the Battle of Omaha Beach during World War II and her brother was wounded four times in Vietnam. She says those experiences bring up a lot of emotions for her.

“Yeah, it’s very painful. But you can’t help but be so proud. You just can’t help it,” she says. “I mean, this is the United States. What more could you want?”

This is the 47th year the local Veterans of Foreign Wars post has organized the parade.  It was one of several Memorial Day events that took place around Sacramento.