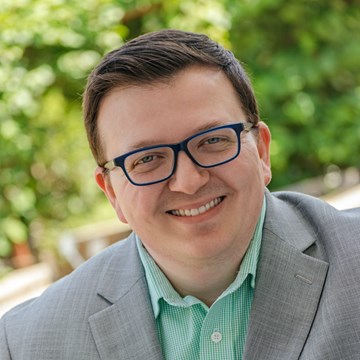 Prior to that, he worked as a fundraising consultant for nearly a decade. He started his career in Chicago, consulted on various projects throughout the country, and made the permanent move to Sacramento in 2010.

At CapRadio, Joseph supports the Development team in a few different ways. He manages the day-to-day fundraising of our capital campaign, serves a primary role in the station’s planned giving efforts, works with Major Donors and Legacy Circle members, and supports the team in prospect research and wealth analysis.

He grew up in a small town in northern Illinois and earned a bachelor’s degree in Radio/TV from SIUC. He enjoys visiting national parks, the Cubs, browsing every aisle of Costco, continuously re-watching The Office, and is generally obsessed with the island of Maui.

Joseph and his wife Mariah live in Sacramento, and are the proud owners of two dogs, Margie and Blue.