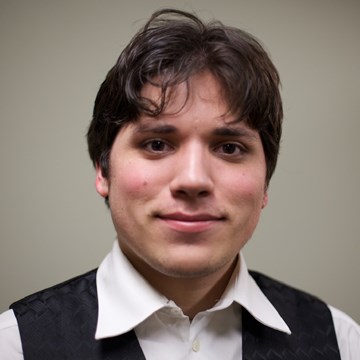 David Fuentez-Anderson transferred to Sacramento State from Modesto Junior College. He’s a Journalism major with a 3.6 GPA. A Communications minor offers him a wide variety of classes, including audio production. Fuentez-Anderson chose journalism as a major because he was looking for a way to combine his writing, technical and people skills.

“I always thought that journalism was a private thing; that you’d have to know what you want to write about and be self-motivated. What I learned from being in the CapRadio newsroom is that journalism is more team-oriented business. There are people on-hand to help shape stories.  Now I enjoy finding ways to support other journalism students in their search for the right story.”

When Fuentez-Anderson is really passionate about something, he says he does good work. As the second Public Radio Experience intern at Capital Public Radio, he has really enjoyed the CapRadio News environment as well as the people at the radio station.  He put himself and his passion into the job.

About the “z” in Fuentez, David says, “One theory is that we come form a part of Mexico that had a good size French population or was conquered by French.  So it’s a French “z".  The other theory is that when my family first came to the states from Mexico, the border patrol wrote down “z” when they heard us pronounce the name.  Which story do you think I prefer?”