The exhibit launches at a shaky time for Planned Parenthood, which could lose federal funding if the Affordable Care Act is repealed or replaced.

“Right now we have a lot going on in Washington D.C., a lot of angst around sexual reproductive health care, around health care in general,” said Crystal Strait, CEO of Planned Parenthood Affiliates of California. “What I think in all this dialogue and rhetoric we get away from, is that storytelling aspect.”

In one of the exhibit’s rotating video pieces, a young woman walks toward an unlabeled white door, later revealed to be a Planned Parenthood clinic. She stares straight ahead as sign-holding protesters shout at her.

It’s a fictional story, but one that represents the many Planned Parenthood patients who get caught in political crossfire, said Sacramento videographer Charlee Rae.

“Someone you know needs Planned Parenthood,’ she said. “So keep it, please.” 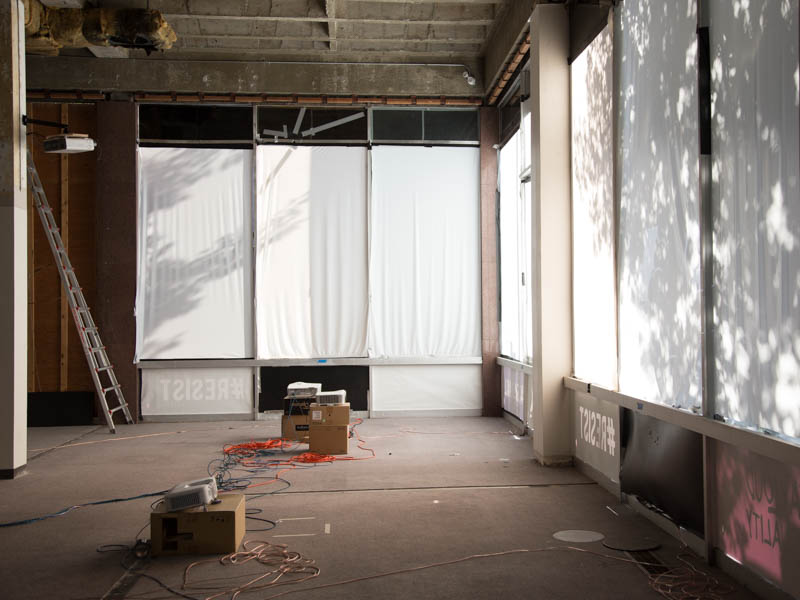 Video is projected from inside to light up the panels visible from the street at the Beacon art installation Downtown. (Andrew Nixon / Capital Public Radio)

But as of Tuesday, people didn't seem to be grasping the meaning behind the display.
"We were trying to figure out what exactly the establishment is representing, like if it's activists that are raising awareness for something or if they're just doing their own art projects," said Amanda Budde, of Sacramento. "We were just trying to figure that out."
The installment is visible after 8 p.m. nightly until July 29. Small sections play during the day, between 7 a.m. and 9 a.m., between 12 p.m. and 2 p.m., and between 4 p.m. and 6 p.m.
Follow us for more stories like this