James Harlan fires up an industrial griddle. He tilts a stainless-steel bowl full of ground beef and it tumbles onto the hot surface, sizzling.

Harlan’s one of seven culinary trainees in the first class of a job skills program at the Salvation Army in Sacramento. He’s cooking beef chili for his own graduation dinner.

The guest list includes homeless veterans and people newly released from the hospital who have no place to go. They’ll stay at the homeless center of the Salvation Army.

“We try very hard because they are the elderly and veterans and people who are really down on their luck so we like to fix something nice for them,” explains Harlan.

Chef Emerick Flores is one of Harlan's trainers in the sixteen-week program. Flores says the goal is learning industrial food production, not fine dining one plate at a time.

Flores ticks off what Harlan’s prepped so far today.

“He's made mixed veggies for a hundred people. Now he’s moving on to dinner.”

These aren’t the kinds of things Flores learned when he attended culinary school. But, he says, they are "employable skills" a caterer or food service manager would value in a new hire.

Flores points to another apprentice, Miguel Lievanos, standing nearby.

Lievanos applies a technique called 'frenching' to a giant heap of chicken wings. He scrunches all the meat toward one end of the bone to give it a “lollipop effect.”

Over sixteen weeks training in the kitchen, Lievanos says he's learned to make something out of nothing. Before this experience, he says these wings might’ve seemed  like scraps.

But now he can turn them into a plate of dressed-up hot wings.

"I like to call that churching it up,” says Lievanos as his classmates laugh at their prep stations.

“Yeah, you got to be able to ‘church up’ your dishes because then you'll be able to make your clients happy. They’ll have a delicious meal. And that’s how you make your buck," explains Lievanos.

Lievanos now has a job at Denny's.

Classmate Kimberly Williams would like to cook for seniors or children. "I like helping those who can't do for themselves," she says. 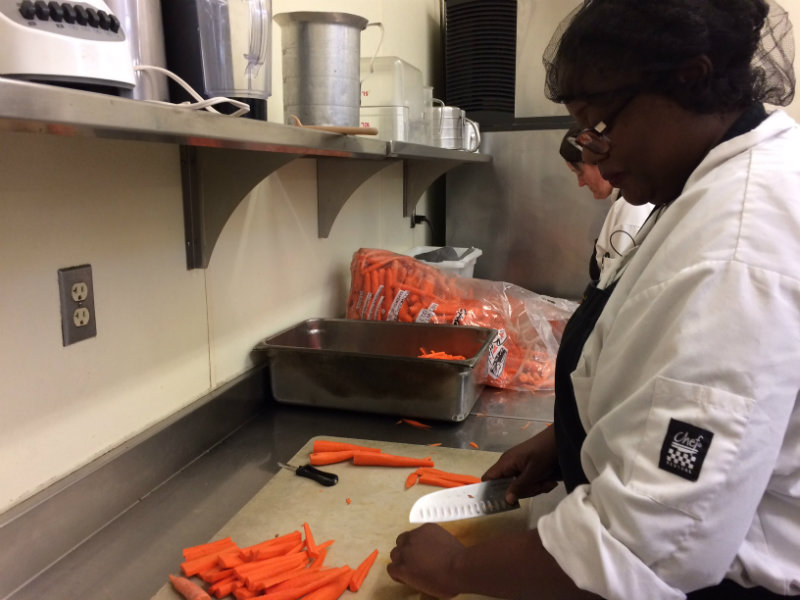 Williams doesn’t have a job lined up yet but she’s hoping her job calls will yield good news next week.

She's proud of graduating and says she and her class mates "shocked themselves" by what they could learn.

“You couldn't pay me to cut a fish and we actually did it!” she laughs.

“I think it was halibut. We cut the head off and cut it in filets and we're even frying it or baking it, grilling it, however you want to do it,” recalls Williams.

Williams was diagnosed with Crohn’s disease several years ago. Apart from job skills, she says her experience in the culinary program has given her a better handle on how to prepare healthier meals for herself and her children.

They'll enroll fourteen students a year in Sacramento. There are similar culinary programs at the Napa and Lodi Salvation Army.

Ross sees great economic potential in the “untapped population.” People who were formerly incarcerated or unemployed and homelessness for health reasons including prior alcohol or drug addiction.

Ross says, "Here's this population that's graduating. They have these soft skills but they are in a tenuous situation where they could go back to old lifestyles.”

Or, Ross points out, society could put them to work.

“As some of my friends would say, 'Hey, I could've been breaking into your car or I could be working in your factory or your business.'"