"Tonight, we did something to fix the roads of California," Brown said as he and triumphant lawmakers stepped outside the governor's office to speak with reporters. "This helps people, because their cars aren't going to get as broken as they are under our bad roads, a lot of them are going to get jobs, and it's part of the prosperity of California."

The governor thanked Democrats and the lone Republican to back the bill, Sen. Anthony Cannella (R-Ceres), for taking a politically unpopular vote.

"Some of the arrangements that were entailed in this process, they may look large, but relative to $52 billion, it's all pretty modest," Brown said, responding to GOP criticism that lawmakers were bought off to vote for the bill. The measure's backers "want to face (voters) with the best foot forward, and we want to help them do that.

UPDATE 10:43 p.m.:  The California Assembly has joined the state Senate in raising fuel taxes and vehicle fees to pay for road repairs.

The Assembly debate was delayed late into the evening Thursday because of one lawmaker's medical issue, but that didn't stop the measure from passing with the required two-thirds supermajority.
"There's no question that our roads need to be repaired," said Asm. Eloise Gónez Reyes (D-Grand Terrace). "We can't sit here and do nothing."
"This massive new tax will not build any new roads, and it will do nothing to fix California's worst-in-the-nation traffic," countered Asm. Travis Allen (R-Huntington Beach).
The vote was not without drama, as Asms. Jim Cooper (D-Elk Grove) and Tim Grayson (D-Concord) held out for about 10 minutes before voting yes.
The final tally was 54 to 26, with Asm. Rudy Salas (D-Bakersfield) joining Republicans in voting no.

UPDATE 7:21 p.m.: The California Senate has approved a transportation funding package that would raise fuel taxes and vehicle fees to pay for road and bridge repairs, public transit and other projects.

It passed on a 27-11 vote -- just enough to reach the two-thirds supermajority threshold required for tax and fee legislation. One Republican, Sen. Anthony Cannella (R-Ceres) joined every Democrat except Sen. Steve Glazer (D-Orinda), who voted no).

Critics slammed the measure for increasing the cost of living for low- and middle-income Californians.

"It is a tax increase that grows over time," Sen. Pat Bates (R-Laguna Niguel) said during the debate. "It never ends."

But supporters, while acknowledging the hardship the tax and fee increases might cause for many Californians, said the money is necessary to fix the state's crumbling roads.

"This actually, with the constitutional amendment, completely locks in funds for transportation purposes," said the bill's author, Sen. Jim Beall (D-San Jose), referring to companion legislation that would place a measure on the June 2018 ballot to block the Legislature from diverting the new tax and fee revenues to other programs"

The measure now moves to the Assembly, where it will also require a two-thirds vote. 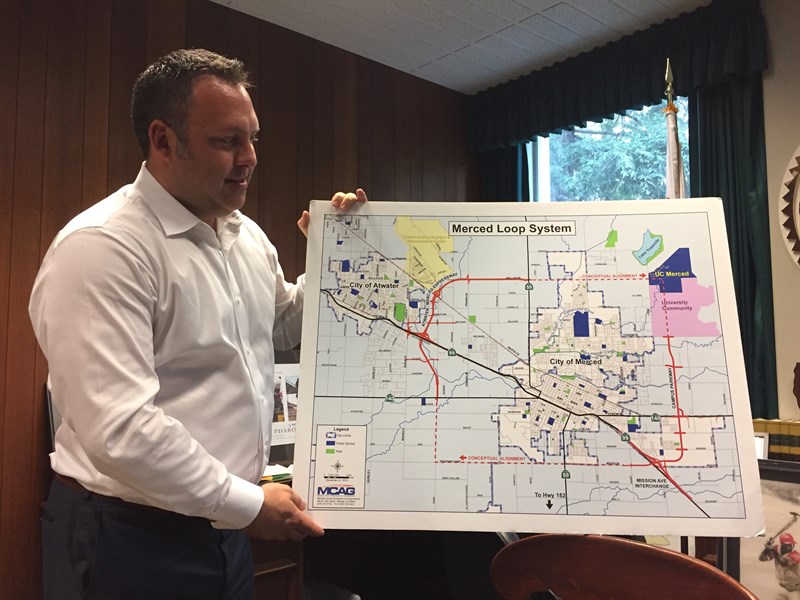 Asm. Adam Gray (D-Merced) holds up a poster of a transportation project in his district that he negotiated funding for in exchange for voting to raise fuel taxes and vehicle fees.

Update 4:22 p.m.: The transportation funding deal at the California state Capitol is in limbo at this hour.

Gov. Jerry Brown and Democratic legislative leaders appear to have the votes they need in the state Senate but are still working to line up the necessary support in the Assembly.

So far, they’ve agreed to nearly $1 billion dollars in extra spending for specific transportation projects in the Central Valley and Inland Empire to win votes from wavering lawmakers.

“Too often, our part of the state gets overlooked,” says Asm. Adam Gray (D-Merced), who held out for money for several projects, including a commuter rail extension that would connect his district to the Bay Area.

“Tax dollars get collected and they get sent to the big urban centers. And in this case, we’ve got some significant new investments in the Central Valley where you know what, we’ve got the highest rates of poverty, unemployment, and frankly, some of the worst air quality in the country,” Gray says.

The Central Valley projects will likely also win the support of Sen. Anthony Cannella (R-Ceres), the lone Republican who's shown a willingness to negotiate on the transportation package.

Because of voter-approved Proposition 54, which mandates that all legislation be in print for 72 hours before final Senate and Assembly votes, the Central Valley and Inland Empire projects can't formally be approved today. But Gray says those projects have been put into a separate measure, SB 132, which will be voted on after lawmakers return from spring break later this month.

“We’ve got the governor, the pro Tem, the Assembly speaker all committed to this deal. We’ve all sat together, we’ve gone over it in detail, we’ve put real language into a bill in public view for everyone to look at. This isn’t being done behind closed doors; there’s no secret handshake deals, it’s right there to see,” Gray says.

The money for Riverside County is expected to earn votes from Sen. Richard Roth (D-Riverside) and Asm. Sabrina Cervantes (D-Corona).

Update at 12:47 p.m.: The Capitol Insider's Guide to Thursday's transportation funding vote in the California Legislature
Here's some guidance on what to look for Thursday as California lawmakers weigh whether to raise fuel taxes and vehicle fees to pay for road repair, transit and other transportation projects:

Update at 12 p.m.: Need a refresher on what the transportation funding deal reached last week by Gov. Jerry Brown and Democratic legislative leaders would actually do? Fear not, we've got you covered.

The deal would raise the following revenues:

And here's a breakdown of where the revenues would go. All dollar totals listed below are annual averages across the first 10 years of the deal, although the available funds will be smallest in the first year (fiscal year 2018-19) and grow each year over time.

The deal also includes a constitutional amendment that the Legislature would place on the June 2018 ballot. It would prohibit spending the new revenues on anything but transportation.

UPDATE 11:30 a.m.: Capitol Bureau Chief Ben Adler will be sending updates as the Legislature is set to vote on the gas tax increase that would fund repairs for roads.

.@AnthonyCannella @AdamGrayCA ...because due to #Prop54, those bills cannot be voted on today.

Original Post: The governor is trying to round up lawmakers for one of the most unpopular votes a politician can take: raising gas taxes and vehicle fees.

“I know there’s a couple of people worried about voting for taxes,“ Brown said Thursday morning at a rally outside the state Capitol, before heading indoors to meet with lawmakers in person. “This is a fee – a fee for the privilege of driving on our roads that the people pay for. And we gotta keep paying for ’em – otherwise, they’re not gonna work for us. It’s just that simple.”

Opponents are fighting hard to kill the deal – or at least delay the vote until after next week’s legislative spring break.

“Over the past six years, general fund spending has gone up $36 billion – and none of that money has gone to roads,“ Fong said after watching the governor's rally. “What Californians are asking themselves is: We pay one of the highest gas taxes in the country, and our roads are poor. Where did our money go?”

Only one Republican is open to the bill, so nearly Democrat would need to vote for the deal to reach the supermajority needed to pass the Legislature.

Proposition 54, approved by voters in last November's election, requires bills to be in print for 72 hours before the Legislature gives its final approval. So the transportation funding measure can't be changed in order for there to be a vote Thursday.

Instead, the governor and Democratic leaders appear to be working on side promises that would not be voted on Thursday but would be fulfilled later this year, either in the state budget or in separate legislation.

It's not clear what backers would do if they can't close the deal Thursday, with lawmakers set to adjourn for a week of spring break at the end of the day. They could call lawmakers back on Friday, delay the vote until after spring break, or give up altogether.