State of the States are usually like State of the Unions -- filled with policy proposals and political agendas. This one wasn’t. Instead, 78-year-old, four-term Gov. Jerry Brown gave a pep talk to anxious Californians, in a state Hillary Clinton won by four million votes.

“This is a time which calls out for courage and for perseverance, and I promise you both,” Brown said.

The governor never mentioned Donald Trump by name, but he wasn’t exactly subtle, either. While acknowledging that the federal government sets immigration policy, Brown said he would oppose any Trump administration efforts to step up deportations of immigrants living in the state illegally:

“Let me be clear: We will defend everybody -- every man, woman and child -- who has come here for a better life and has contributed to the well-being of our state,” the governor said.

And Brown vowed to do everything possible to preserve Obamacare and fight climate change, two areas where California has staked out aggressive policies.

Brown also said he wants to work with the president on infrastructure projects. After the speech, the top Republican in the Assembly, Chad Mayes, said he hopes the tone at the state Capitol doesn’t endanger federal funding.

“I do fear that some of the caustic and abrasive rhetoric that is being used to try to incite folks against the administration could be harmful to that,” said Mayes.

Brown ended on a defiant, if poetic, note by quoting -- alas, not singing -- Woody Guthrie’s progressive folk anthem “This Land is Your Land.”

“Nobody living can ever make me turn back / This land was made for you and me.“

“He added: “California is not turning back. Not now, not ever!”

If Brown sought to motivate Democrats anxious about President Trump, his speech may well have done the trick.

Senate Budget Committee chair Holly Mitchell is a prominent progressive and a frequent critic of Brown from the left. She said the speech reminded her of Barack Obama's signature campaign line:

“The governor was fired up and ready to go, and so are all of we in the California Legislature,“ Mitchell told Capital Public Radio after the speech. “I think it was (Brown's) best State of the State (address). It was right on time. It was just what I know I needed.“

A handful of Democrats raised concerns over issues Brown left out of his address -- such as affordable housing.

Republican leaders generally praised the tone of Brown's speech as more conciliatory than that of other California Democrats. But most rank-and-file GOP lawmakers criticized the governor for pursuing what they consider a flawed agenda.

UPDATE 6 p.m.:  In his State of the State Address, Gov. Jerry Brown vowed to defend the protections California affords all immigrants in the state, documented or not, against the Trump administration.

"We will defend everybody – every man, woman and child – who has come here for a better life and has contributed to the well-being of our state," Brown said in his speech delivered at the state Capitol in Sacramento on January 24, 2017.

Brown added that immigrants are an integral part of California, helping "create the wealth and dynamism of this state from the very beginning."

He went on to say "27 percent" of Californians or "almost 11 million were born in a foreign land."

PolitiFact California decided to fact-check Brown on those numbers. Read it here.

UPDATE 4:08 p.m.: While Governor Jerry Brown was praising California’s efforts to combat climate change in his State of the State speech, his signature program to reduce greenhouse gases was being challenged in court.

California’s cap-and-trade program is a central part of the state’s effort to reduce carbon emissions. It requires companies to buy, at auction, permits to emit the heat-trapping gases. But companies say that requirement is unconstitutional.

Judges from the California 3rd District Court of Appeal heard arguments Tuesday, but have 90 days to issue a decision in the case.

Read more about the case here.

UPDATE 12:09 p.m.: Governor Jerry Brown is promising to defend California's laws on immigration, health care and the environment in the face of the Trump administration. In his annual State of the State address Tuesday morning, Brown said "California is not turning back. Not now, not ever."

"While no one knows what the new leaders will actually do, there are signs that are disturbing,” said Brown. “We’ve seen the bold assertion of ‘alternative facts,’ whatever those are.”

Following the speech, State Assembly Republican leader Chad Mayes said California needs to work with the Trump administration…or risk losing out on federal funding for infrastructure projects. He said it’s not us against them.

"I do fear that some of the caustic and abrasive rhetoric that is being used to try to incite folks against the administration could be harmful to that,” said Mayes.

Meanwhile, Brown said he intends to fight any moves to roll back the fight against climate change, saying Washington can't change the facts of that issue.

UPDATE 11:36 a.m.: In his annual State of the State address Tuesday morning, Governor Jerry Brown touted the contribution immigrants have made to California.

Brown said – under the Trump Administration – California may be called on to defend state laws enacted to protect undocumented immigrants.

"And defend them we will,” said Brown. “And let me be clear, we will defend everybody, every man, woman and child who’s come here for a better life and contributed to the well-being of our state."

The governor also said California is known around the word for fighting climate change and that the state cannot fall back and give-in to climate deniers.

Brown also spoke about rebuilding infrastructure, which is an issue of common ground with Pres. Donald Trump.

"Now here’s a topic where the president has stated his firm intention to build and build big," Brown said. "In fact, he met with several labor leaders yesterday (Monday) and committed to a $1 trillion investment in public works across America. And I say ‘Amen to that, man. Amen to that brother. We’re there with you.'"

UPDATE 11:30 a.m.: California Governor Jerry Brown touched on key topics from immigration and jobs to healthcare and climate change in his State of the State Address this morning.

Capital Public Radio’s PolitiFact California is fact-checking claims from Brown’s speech. Our fact-checking team has examined nine claims by Brown in the past, rating them anywhere from True to Mostly True to Half True on PolitiFact’s Truth-O-Meter.

Keep up with the latest fact-checks from PolitiFact California online at www.politifact.com/california and on Twitter and Facebook.

Take a look by clicking on the image below: 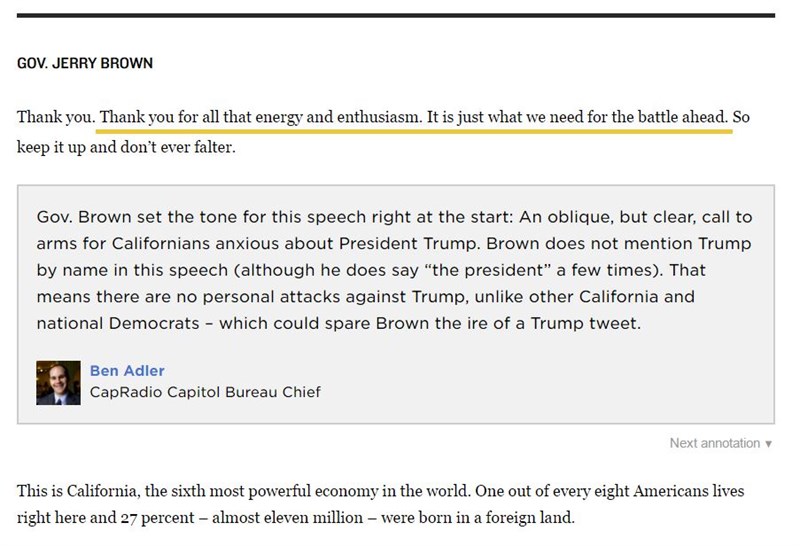 State Of The State Preview

Original Post: Gov. Jerry Brown will deliver his annual State of the State address Tuesday to a joint session of the California Legislature. It’s a chance for the leader of a blue state to lay out a competing vision just days after President Trump's inauguration.

You can take it to the bank that the governor will speak of “fiscal prudence” and stress the state’s commitment to battling climate change. Those causes near and dear to Brown have become hallmarks of his State of the State addresses.

What’s far less clear is the tone Brown will strike when it comes to Donald Trump.

Leading California Democrats -- especially legislative leaders -- have vowed to fight the president and Republican Congress every step of the way. But Brown’s rhetoric has been far less heated, with one exception:

The big question is whether Brown will position himself squarely against President Trump on issues besides climate change, like health care and immigration -- or if he’ll continue to be more circumspect.