Six-year old Ethan Dean of Rancho Cordova can claim many titles, including soccer player, Star Wars fan, and first-grader. On Tuesday morning, he added another to that list: Sacramento’s most popular garbage man.

Ethan has cystic fibrosis. On Tuesday, he lived out his dream of being a garbage collector with the help of the Make-a-Wish Foundation and Sacramento’s Waste Management agency. Riding in a truck with Sam Turman, Ethan made five stops in midtown and downtown Sacramento. Hundreds of people came out to cheer him on.

Ken Dean, Ethan's dad, followed him along the route. At Sacramento City Fire Station No. 2 on I Street, he talked about the community’s participation.

When asked about Ethan’s cystic fibrosis, Dean said that his son is doing well, all things considered.

“He’s doing great,” he said. "We're doing a lot of physical therapy with the nebulizers and chest treatments and that seems to help prevent things from happening. Right now, there's no cure. There's been a lot of good medicine coming out that's making the median life age go higher. Like 20-30 years ago it was in the teens. Now it's in the 40's.

As for Ethan, he’s a boy of quick smiles but few words. His favorite part of the day? “Driving the truck,” he said.

Ethan’s smile was reflected in the faces of the crowd. Jill Ballard is a Sacramento teacher and Make-a-Wish volunteer. She wore a green cape and superhero glasses in support of Ethan.

"When the opportunity came up, when they were looking for volunteers to come out here to be superheroes, I thought I'd just throw my name out there to see if they wanted me. So, it's fun to see. A lot of times we don't get to see the wish all the way through because they go on a trip or something and we just get to be there to send them off. So, it's kind of fun to see the wish all the way through to the finish."

As Ethan and Sam rolled up to the fire station, a crowd of more than 100 people lined I Street with signs that celebrated the six-year old garbage collector. A full police escort accompanied Ethan’s bright green Waste Management truck. Firefighters walked into the station with him. They showed him boxes of toys collected by the Sacramento Fire Department for a Make-a-Wish toy drive. 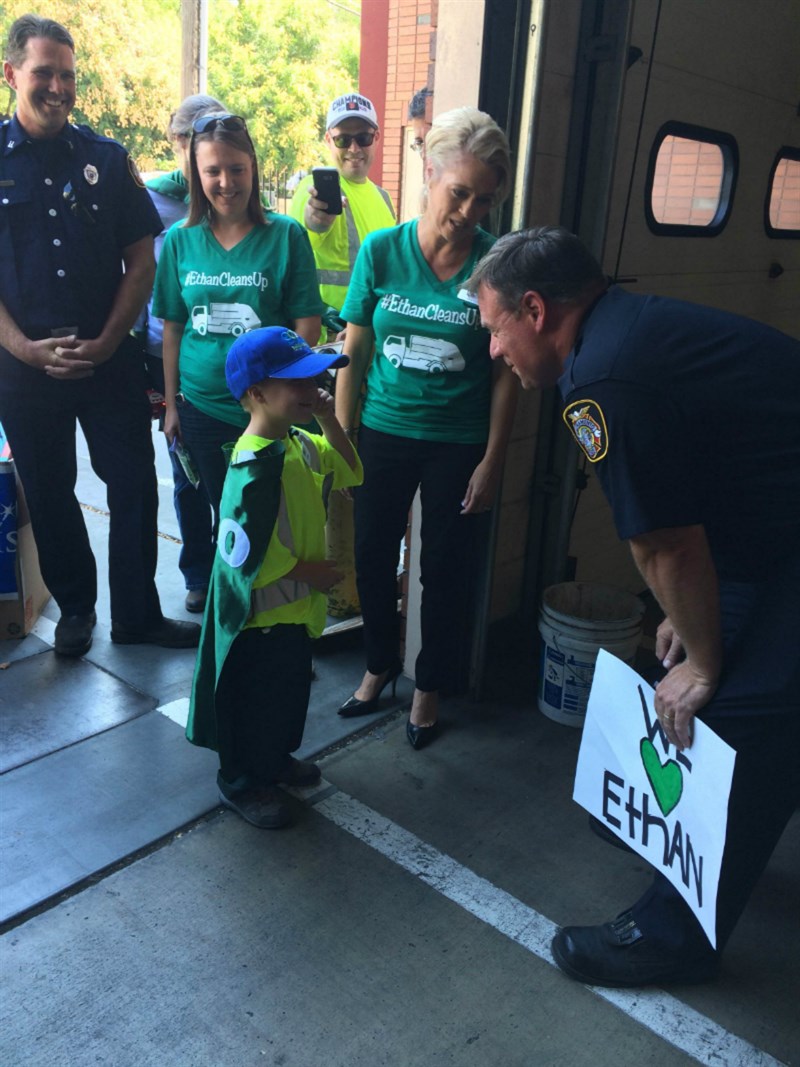 After stops at the Cal EPA, where his dad works, and Frank Fat’s restaurant, Ethan’s route ended at the State Capitol. A crowd of hundreds awaited him. His dad carried him on his shoulders on a green carpet to the building’s west steps through a line of cheerleaders with yellow and green pompoms from Rio Americano High School. Mayor-elect Darrell Steinberg and Sacramento Police Chief Sam Somers gave speeches.

Northeastern California Make-a-Wish CEO Jennifer Stolo stood onstage with Ethan and answered questions in a special press conference on the Capitol steps. She said the local support, including sponsorship from Randle Communications, made the difference in Ethan’s wish being granted.

“When a city comes together like this, and have you all participate in the wish, it truly changes the community forever,” she said.

Today is the day #EthanCleansUp! Join us at Fire Station 2 at 11am & please bring new or gently used toys to donate. pic.twitter.com/LgLE2UuErD