The Federal Bureau of Investigations is now offering a $50,000 reward for information that leads to the identity of the man known as the East Area Rapist and Golden State Killer.

Investigators believe he raped 45 women and murdered 12 people in Sacramento, Contra Costa County and Santa Barbara from 1976 to 1986. 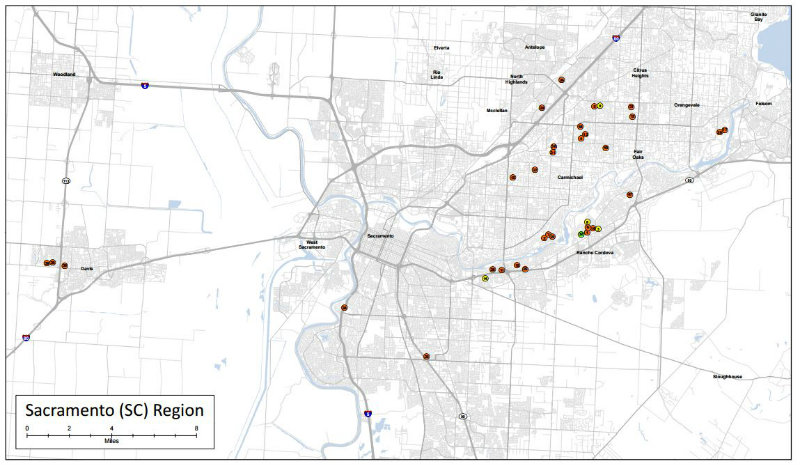 This map shows the locations of crimes in the Sacramento region that are connected to the East Area Rapist/Golden State Killer. FBI / Courtesy

Anne Marie Schubert is Sacramento County District Attorney. She says life in Sacramento was rather idyllic for a young woman in the early 1970's.

"For those of us who grew up here, that all changed," says Schubert. "My sister, who's four years older than me, was a baby sitter in 1976 and was terrified to baby-sit kids because she was afraid that he was coming. And that's how everybody felt."

The department is also posting all of the sketch artist pictures of the man and the dates and locations of the crimes he committed. 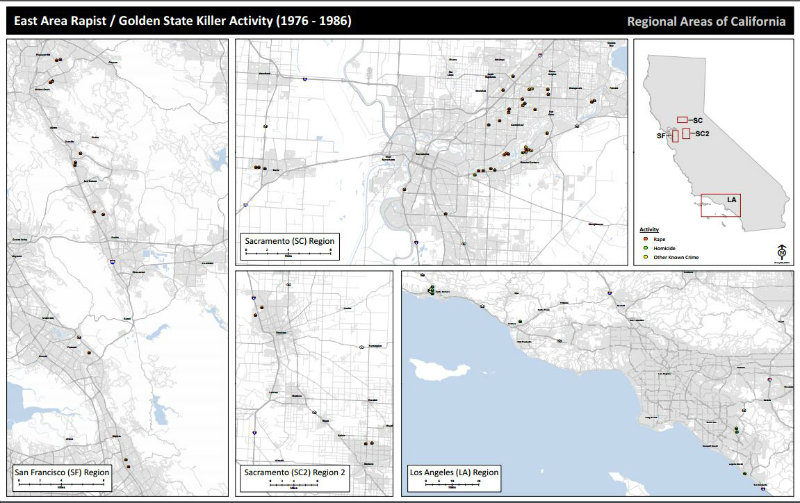 This map shows the locations of crimes throughout California that are connected to the East Area Rapist/Golden State Killer. FBI / Courtesy

Paul Belli is the cold case supervisor with the Sacramento County Sheriff's Department. He says not all of the sketches resemble one another, but the suspect's method of operation is the same.

"It's a very unique M.O., it hasn't been repeated since then and I'm very confident that it's not two separate people that were operating at the same time, doing the same thing," says Belli.

The suspect often tied up his sexual assault victims and their spouses and stole jewelry and coins from the home.

He was also known to place dinner plates on the tied-up family of victims before committing the rapes.

He is suspected in the 1978 killings of Brian and Katie Maggiore of Modesto.

Investigators say they have DNA evidence that links the southern California and Contra Costa-area crimes, but do not have the evidence from the Sacramento crimes.

The man is also a suspect in more than 150 burglaries.

Investigators think he may have had a connection to the military due to the proximity of the crimes to bases in the state.

Belli says the suspect would be in his 60s or 70s now and may have had ties to the military due to the proximity of the crimes to McClellan, Mather Field, Travis Air Force Base and bases near Santa Barbara and Los Angeles.

"We've always had the help of OSI (Office Of Special Investigations) for the Air Force," says Belli. "We've also enlisted the Navy's assistance investigatively as well and have been trying to track two very large bases with people who were coming in and out for training and a variety of things like that."

As far as law enforcement agencies know, the crimes stopped from 1981 to 1986. Belli says it's not unusual for such a break to happen in serial cases, which are caused by incarceration or by the arrival of a child or other significant event in a suspect's life.