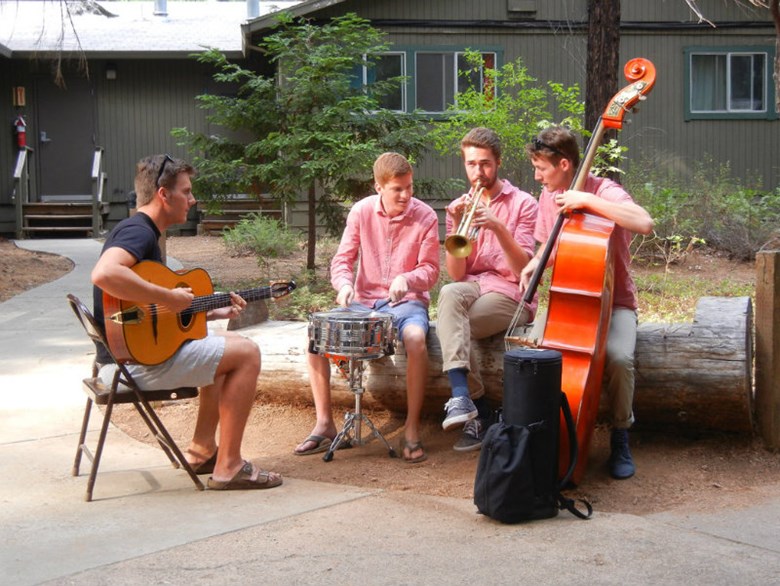 Courtesy of The Kortet

The Sacramento Music Festival is this weekend.

Big Bad Voodoo Daddy and Pablo Cruise are among 70 bands playing all types of music. That includes jazz – which is what the four-day event in Old Sacramento was all about when it began as the “Jazz Jubilee” in the mid ‘70s.

One group of young musicians is helping to keep the festival’s old tradition alive.

It’s not every day you hear 19-year-old guys talking about music written when their grandparents were kids. But that’s what members of The Kortet like to do.

“We just really like to listen to old swing music," says trumpeter Andrew Stephens. "And we’ll always be texting each other like ‘hey man, have you heard this one?’”

Singer and guitarist Devan Kortan joings the conversation: “I mean like just today I was telling Andrew about, I love that tune 'I’m Old Fashioned', or 'Pennies from Heaven'.”

“Yeah, we were just talking about how we need to add it to the set list for the festival,” says Stephens.

These guys not only like to talk about jazz standards – they play them pretty well too.

“Most of the other people that play this style of music are much older,” says Stephens.

The members of The Kortet all met four years ago at a youth jazz camp. It’s put on every summer in Pollock Pines by the Sacramento Traditional Jazz Society.

“They take 100 kids and you go up in the mountains and they make ten bands," explains Kortan. "Each band gets sort of like a director. You arrange tunes together and you really dig into the style.”

Kortan says, since they’ve become a group, finding places to perform has been a little challenging.

“That’s the tough part about Sacramento is that there’s not a lot of like great sit-down, music-only venues," says Kortan. "But you can catch us at places like the Naked Lounge, Shady Lady, we’ve played at the festival.

Here they are at the festival last year – playing outside, on the dock in front of the Delta King. And as you’ll hear, close to the train tracks.

Bassist Dexter Williams says the group gets a lot of positive reaction from audiences, wherever they play.

“It also helps younger people connect to that style of music because most of my friends at school don’t have any occasion to listen to it," says Stephens. "But if I’m playing it, they’re going to come out and see it, and it’s music they’re able to connect to.”

“When they hear jazz that perks their ears and see us, young people their age playing it, it really brings a different perspective to jazz," says Kortan. "Because a lot of people think that it just belongs in an elevator.”

At this year’s festival, you can catch The Kortet playing near the same spot as last year… without the train whistles.

“That’s definitely one of the more interesting places to play a gig at the festival,” says Stephens.

“Yeah, as the train rolls by," agrees Kortan. "Actually all of our sets at the festival are in the Delta King.

“But inside,” Stephens reiterates.

“But inside, yeah,” says Kortan, laughing.

“Not on the dock,” Williams says.

Check Here For The Full Schedule