The latest Sierra Nevada snow survey finds that the statewide snowpack is at 87 percent of normal for March 30 and 87 percent of the April 1 average. 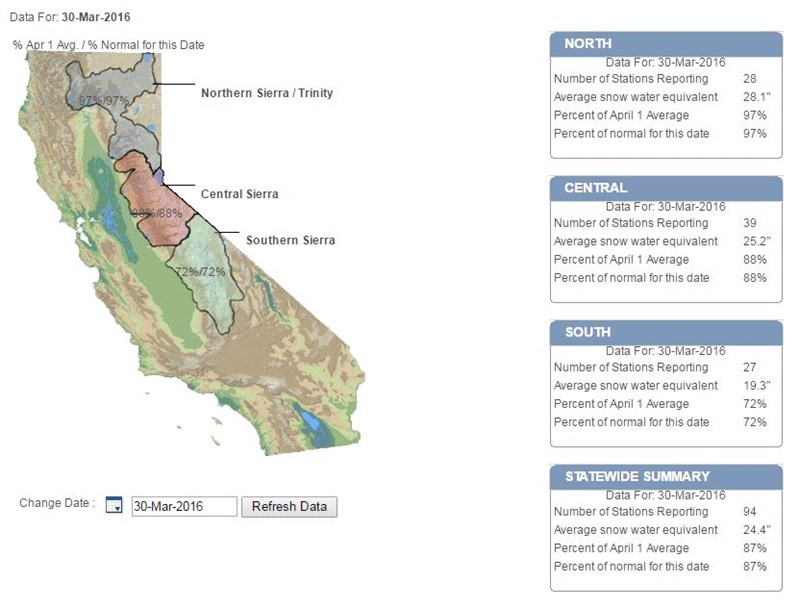 California regulators say the measurement at Echo Summit Wednesday found the snowpack at about 95 percent of normal. They intend to use the figure when they reopen a discussion on whether to ease or end conservation mandates.

During the historic drought, now in its fifth year, Californians have been ordered to use at least 20 percent less water. To comply, many have let lawns go brown or converted to drought-tolerant landscaping.

The snowpack was aided by an El Niño storm system that dumped more water on the northern part of the state while leaving southern areas relatively dry.

Reservoir storage has improved in the northern Sierra but the central and southern reservoirs are below average.

The state’s two largest reservoirs, Lake Shasta and Lake Oroville, have filled with frequent storms over the winter and in March.

Gov. Jerry Brown declared a drought State of Emergency on January 17, 2014 and directed state officials to take all necessary actions to prepare for water shortages.

(AP) — State drought surveyors will trudge through deep snow Wednesday to manually measure what could be close to a normal Sierra Nevada snowpack for this time of year.

A year ago, Gov. Jerry Brown stood on the same spot — then a dusty patch of ground with no snow — to announce that the dire drought required residents to cut back water use by 25 percent.

Surveyors expect to find much more snow this time thanks to the El Nino storms that have drenched Northern California.

But Doug Carlson of the state's Department of Water Resources says it won't end the record dry spell.