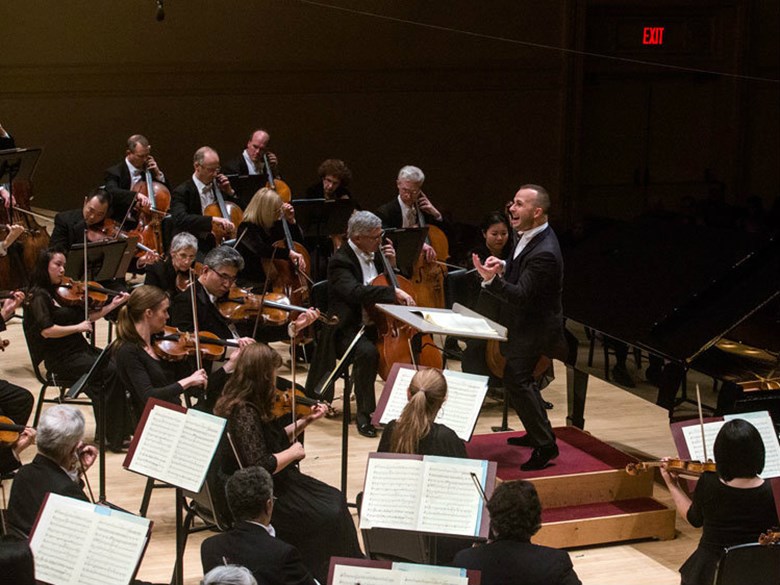 by TOM HUIZENGA • It was the day before Thanksgiving in 1902 when the Philadelphia Orchestra made its debut at Carnegie Hall. Music by Tchaikovsky was on the program and on the podium was Fritz Scheel, the first leader of an orchestra founded just two years before.

Since then, the Philadelphians have paid dozens of visits to the venerable venue, and on Jan. 14 they returned with a program steeped in the Viennese tradition. Music director Yannick Nézet-Séguin conducted a Beethoven piano concerto with young Canadian soloist Jan Lisiecki and a piece from late last century by HK Gruber, a native of Vienna.

The concert opened with about the most Viennese music imaginable, "Tales from the Vienna Woods" by Johann Strauss, Jr., the composer dubbed the "Waltz King." Gruber's Charivari, subtitled "An Austrian Journal for orchestra," is a cheeky take on Strauss' famous "Perpetuum mobile" polka. Best known for his demented cabaret "pandemonium" Frankenstein!!, here Gruber takes hammer and tongs to Austrian propriety.

The 20-year-old Lisiecki, named Gramophone magazine's Young Artist of the Year in 2013, made his Carnegie Hall debut with the gentle, lonely opening chords of Beethoven's concerto. Nézet-Séguin added another Beethoven piece to the concert — but with an extra Viennese twist. It's the String Quartet No. 11 in F minor, Op. 95 in a version for string orchestra by Gustav Mahler, heard first in 1899 another legendary hall, Vienna's Musikverein.