California produces half the nation’s fruits, nuts and vegetables.

Now that the state is headed into its fifth year of drought, it’s looking at more water-efficient ways to grow food.

California may be able to learn some lessons from Israel. The arid country averages less than 25 inches of rain a year and still produces almost all of its food.

One Israeli is producing food without much water in the drought. 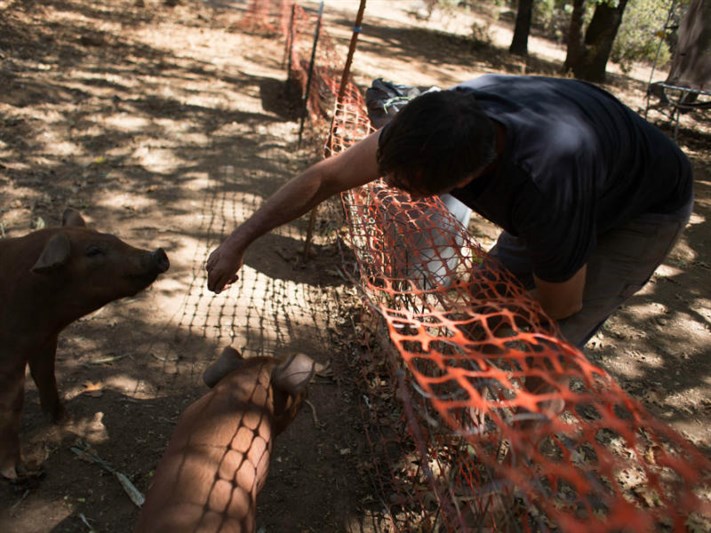 Shahar Caspi of Oregon House, CA with his two pigs “Ava” and “Adamo” on his farm. The native Israeli wants to use the pigs as part of bio-dynamic farming.  Andrew Nixon / Capital Public Radio

Shahar Caspi is in his is in his backyard talking to his pigs.

One of the first things you’ll learn about Caspi is that he’s not afraid to do things differently, to a point.

“I haven’t tasted one because I’m afraid to go to hell for it. We don’t eat pigs,” says Caspi.

Caspi moved from Israel to the Sierra Nevada foothill town of Oregon House eight years ago to run a vineyard.

Now, he grows produce in a community supported agricultural operation. 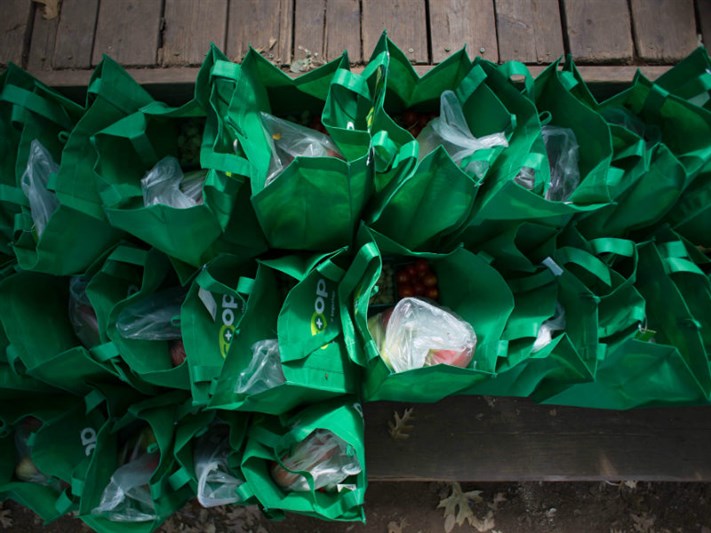 The presence of pigs on his farm might be shocking to some, but he’s also seen his share of shocking when it comes to farming practices here in California.

For instance, he can’t believe that some California farmers still flood their fields to irrigate their crops.

“You know first time I came to this country I said, ‘What is that? Something went wrong here. They blew up a pipe or something’.”

That was back before the drought. But even then, Caspi treated water here as he would back home. 60 percent of Israel is desert. So water is considered a national resource.

“In Israel, if you water your garden during the day, you will get fined. Or they will put a lock on your water and you cannot water anymore. So you water only at night,” says Caspi.  “Everybody aware of it, why? Because there is no water. One tiny little lake. You have Lake Tahoe. You can fit all of Israel in Lake Tahoe.”

It’s a mindset that’s helped Caspi continue to grow food year round here in the midst of California’s worst drought on record.

It’s helped him turn small plots of rocky dry soil into productive farmland. He takes me to one plot amidst a grove of cherry trees that weren’t producing much fruit before he took over. 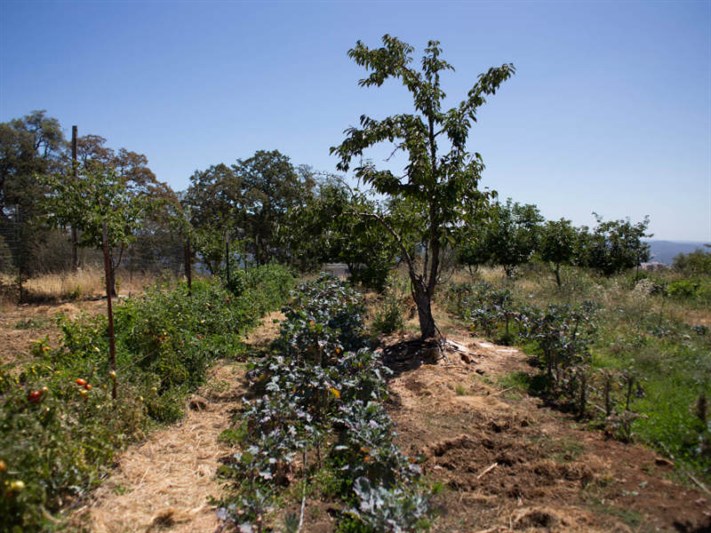 Several rows of vegetables are planted between cherry trees in one of Caspi’s gardens. He takes advantage of as much space as he can. Andrew Nixon / Capital Public Radio

“California is such a big place. In Israel, the trees are much, much closer together,” says Caspi.

Caspi takes advantage of all that extra space. He’s planted four rows of vegetables in between the trees, and uses organic material to fortify the soil. He gets down on his knees to dig in to decomposing horse manure and shredded roots.

“This is a huge amount of organic matter. When you plant a tree in such a rich environment, we will need to use much, much less water.”

Caspi uses a drip irrigation system to water his crops. The plastic emitters in those systems were invented in Israel. 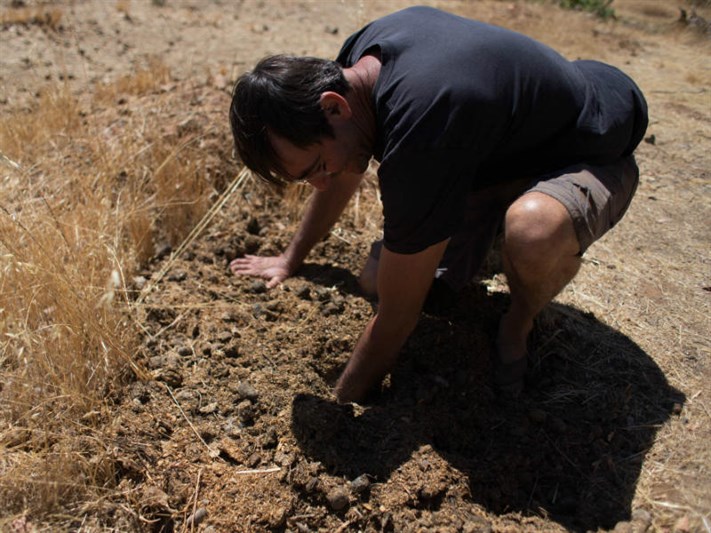 He says it also helps a lot that the soil here has never been tilled.

“There are many theories about no-till farming, how it increases the ability of the soil, for water absorption, retention, infiltration all these things,” Caspi explains.

None of these methods are unheard of in California. No-till has been around for decades. Nearly 40 percent of the state’s farmland is irrigated using drip.

Farmers who have been around longer than Caspi have been slow to adopt the water-efficient practices, even as things have begun to change. 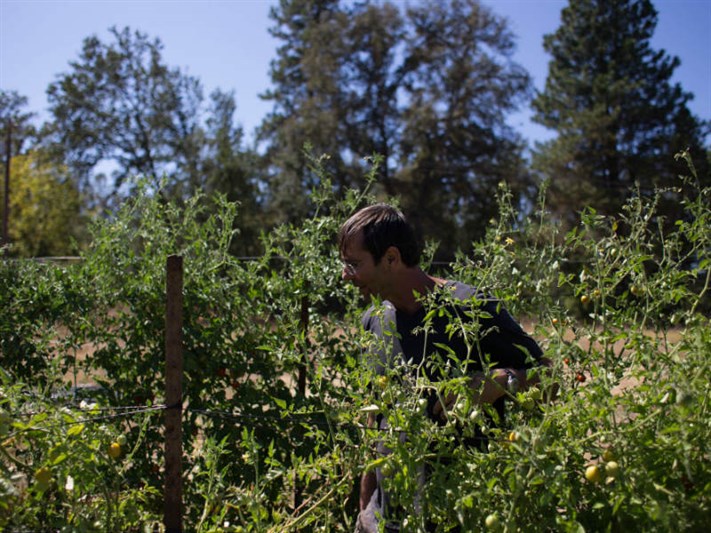 “Generally farmers are skeptics about new things,” says Dennis Chessman, state agronomist with the United States Department of Agriculture’s Natural Resources Conservation Service in Davis. “They have something that works and if it works why change it?”

Chessman says no-till practices require new equipment and can take a few years to produce high yields. Switching to drip irrigation can be costly. California farmers also grow high-value crops. So the perceived risks are high too. Chessman says until recently, there just hasn’t been much incentive to change.

“There are things that we can learn from the way they do agriculture in some of the more arid regions of the world,” says Chessman. “But historically in California, with plentiful irrigation water, we’ve not given much thought to doing that.”

Chessman says the drought is forcing farmers to re-think how they grow food. Newcomers like Caspi may be helping to show the way. 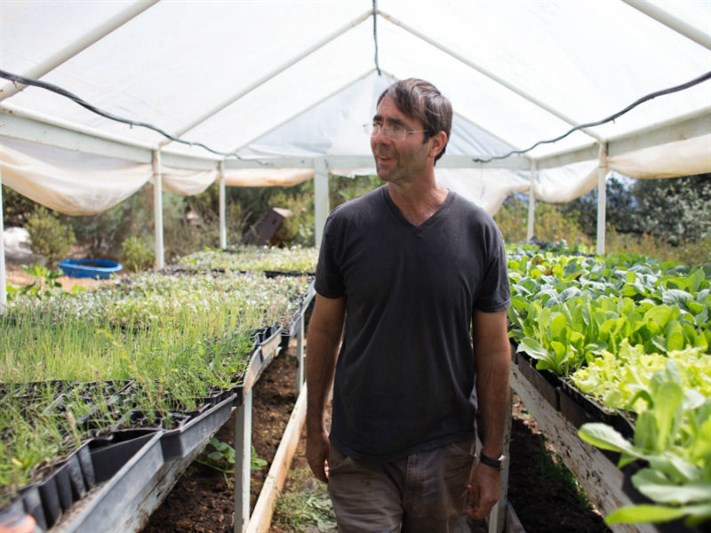 Caspi admits he doesn’t have it completely figured out either. He’s still experimenting with the various elements of what’s known as biodynamic farming, which treats soil, plants and animals as a holistic entity. That’s why he has the pigs.

“You just rotate them,” says Caspi. “When you finish the garden, you just move the animals. They eat. They poop. They fertilize the soil and then the next year you can grow the crop. We will get to it. It’s still a little bit complicated.”

Caspi says it may take a few more years to get his farm operating the way he wants it. Meanwhile, though, using water sustainably just seems like common sense. He says his fellow farmers may need to accept that water in California may become as scarce as it is in Israel.

“It’s a different mentality because this country is so big and huge and so rich and everything is in such great abundance, so why not? But Mother Nature may be showing us that this is not the case anymore.”