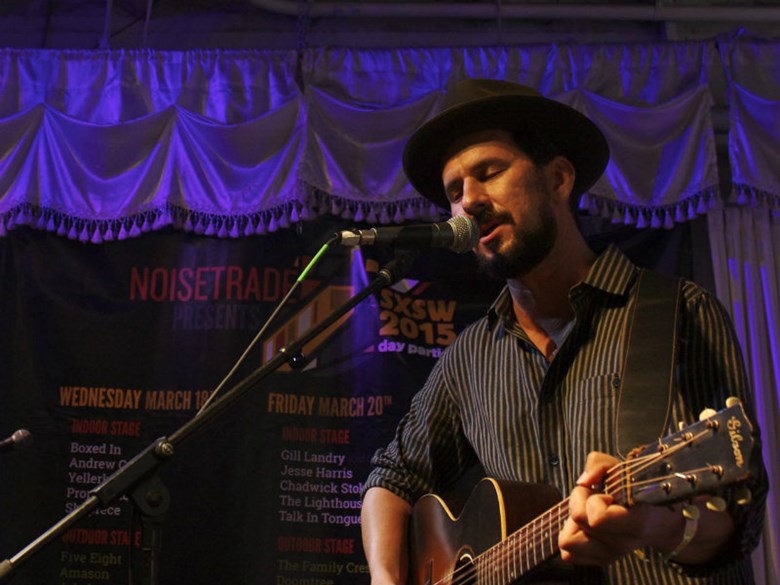 Singer/songwriter and guitarist Gill Landry doesn’t shy away from personal questions. He often couches his rambling replies with “I hope I didn’t give you too much information.” In a recent phone interview with CapRadio Music, Landry said that performing sad songs but not feeling sad is like having sex when you’re not in the mood.

“The well of sadness is in me. I can tap it. I can also not tap it,” Landry explains.

He’s between gigs and traveling alone through the New Mexico desert, one of his favorite places in the United States. In the middle of answering a question he interrupts himself to point out a rainbow.

“Oh man, it’s gorgeous out here. Right now there’s this rainbow happening over this crappy RV park in the desert.”

In a duet titled “Take This Body” with Laura Marling, Landry taps into that well of sadness. He sings, “standing out on the edge of town / hoping that you don't let me down / all of the tears I try to hide / rise up to haunt me with a vicious tide.”

The chorus breaks into a more upbeat hopeful sentiment, “take this body babe and treat me right / make me believe we’re not alone.”

“I don’t prize happiness, but I don’t champion sadness either,” explains Landry. “To be honest sad songs make me happy. It’s comparable to thinking too much about other things while having sex. If your partner or lover is like ‘ok we’re having sex at 8 o’clock’, you’d be like ‘ok, alright,’ but you’re not really….”

Landry trails off and then finds himself again talking about performing live.

“Everybody has their own version of foreplay before a show, but it’s 8 o’clock, I might not want to channel that - but that’s part of the craft. I’m into the aspect of acting. It has a lot of truth in it but it’s also poetry and exaggeration, fantasy -  but I don’t want it to be phony.”

Landry says he enjoys the challenge of communicating different types of sadness.

“Certain sadnesses are the hardest to communicate - explaining really letting a friend down requires poetry in a way that says the things that aren’t so easy to put into a sentence.”

In “Funeral In My Heart,” Landry explores the sadness of losing a loved one. “Everyone is dressed in black / With chrysanthemums and voodoo dolls trying to bring you back / As the lonesome hearse rolls slowly to the graveyard of my mind / Other than that I’m feeling fine.”

Early on, Gill Landy was a busker in New Orleans with the vaudeville-inspired Kitchen Syncopators. He met the guys from Old Crow Medicine Show during that time and started playing banjo and dobro with them occasionally until 2007 when he joined the band full time. He fondly remembers his days on the streets.

“It was a way to beat the system. Not only beat the system as far as we were all doing shitty manual labor jobs, but we could also beat the system of having to book gigs and deal with the bullshit venues and trying to get a foot in any door. The street just erased that.”

Landry says learned his craft on the streets of New Orleans.

“You play a lot more music on the street. To be honest right now I have a career in driving and then for about an hour a night I play some songs.”

After decades in music and thousands of miles on the road Landry says his biggest challenge is staying connected to the ‘why’ of being a musician.

“You can get lost on the road. Distracted by all kinds of bullshit... I do what I do because I love it. It’s literally that simple. I love the freedom. I love the medium of communication. I love the network of community. I like the perspective of watching the world go by town-for-town, year-by-year.”