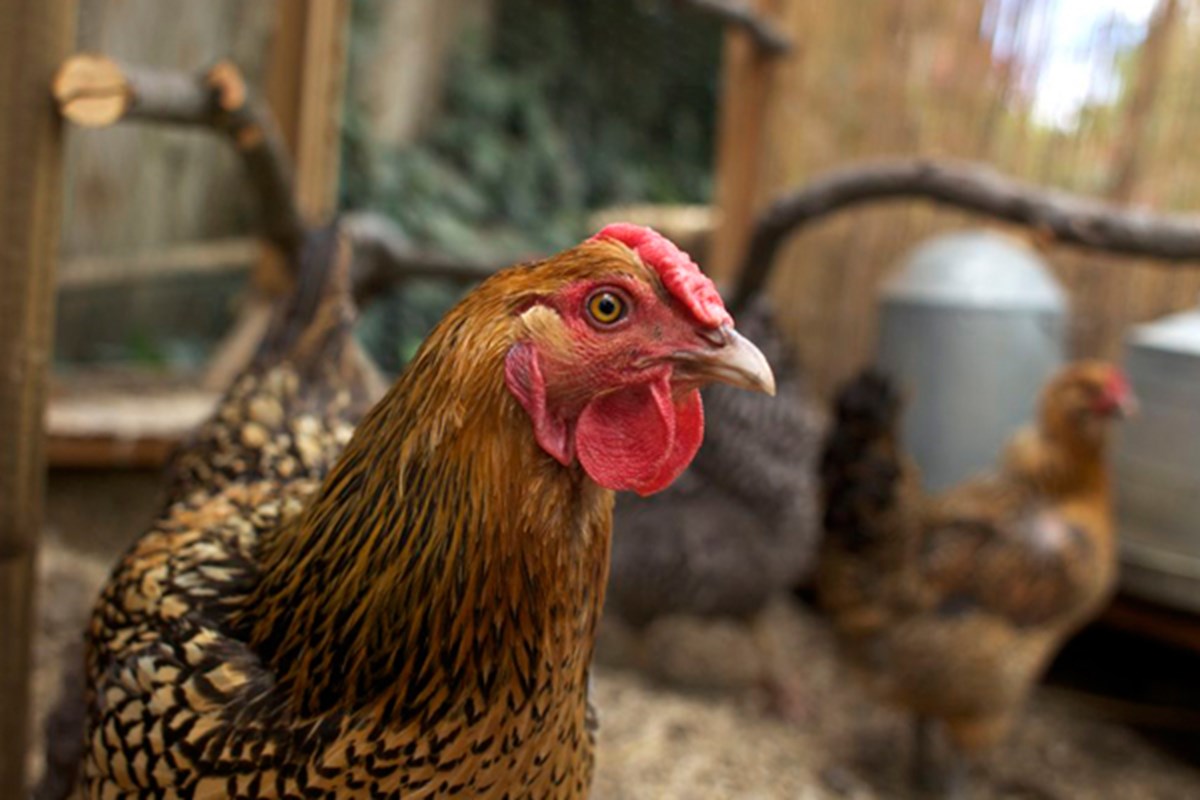 Davis, California. It has one of the nation's most admired school lunch programs. Celebrity Chef Jamie Oliver even points to the university town as a model for the country.

The Davis Joint Unified School district is back in session now.  But earlier this summer, as the food staff was preparing for the new year, Steve Milne paid a visit to find out what makes this celebrated program tick. Steve caught up with the woman in charge of school lunch and learned about the ambitious support system behind her.

The school lunches that end up in the 15 Davis school cafeterias are all made in the Central Kitchen. The enormous ovens and giant stainless steel kettles sit empty, but will soon be put into action.

"Have you seen this before? This is a rotating oven," says Rafaelita Curva, the school district's first Nutrition Services Director. "You can have a party in there and cook yourselves to death," she laughs. Actually, Curva and her staff of 14 will make meals like frittata from scratch and bake them in this oven.

"The employees that we have, you know they love coming to work and doing this for the children." - Rafaelita Curva, Nutrition Services Director, Davis Joint Unified School District 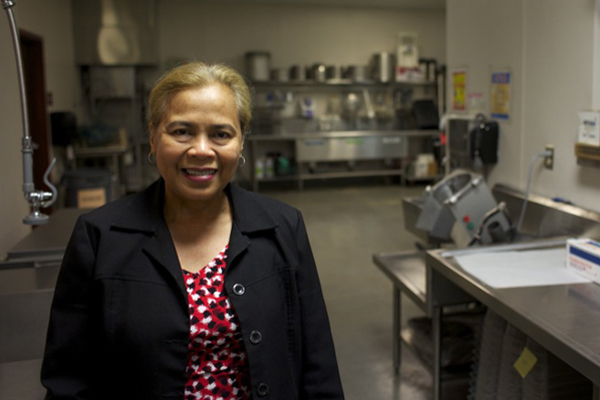 "The major ingredient is eggs, and we put in lots of vegetables. These are commodity eggs and local vegetables," she says. The kitchen is a quiet place during the summer break, but when school is back in session it will come to life. "It's bustling with activity and it's a happy place, you know. And the employees that we have, you know they love coming to work and doing this for the children."

Curva's preparations for the new school year include ordering both commodity and local foods to make sure there are enough ingredients in stock to make that frittata, and other dishes. About half the lunches on the menu are made from scratch, and more than 60 percent of the produce and other ingredients come from farms within a 300-mile radius.

Davis is a college town of 65,000 surrounded by farmland. The University of California Davis actually started out as an Agricultural University in 1905.

The menu Curva's team crafted includes daily salad bars and items like macaroni and cheese, steamed carrots, baked chicken and international cuisine, including a beef dish from Korea - Bibimbap "In the Bibimbap we are using commodity beef," Curva says. "We have marinated it in special sauces. It has a very Korean flavor and you serve it over fresh vegetables - carrots and zucchinis and different colored cabbages. We were surprised how popular it was when we tested it."

Davis kids get to sample new recipes throughout the school year thanks to a group of "taste testers" - mostly UC Davis nutrition students. They volunteer for Davis Farm-to-School, a booster club for school vegetable gardens and healthy eating.

"The taste-testers wear aprons and they hold a tray which they fill up with samples and they stand at the end of the line in the cafeteria so that children have the opportunity to taste their sample and hopefully when they get to the front of the line, then choose to actually get that on their school lunch tray," says Julia Van Soelen Kim, program coordinator.

Davis has one of the country's most comprehensive Farm-to-School programs, with contributions from local farmers, parents and UC Davis researchers who specialize in food, agriculture and public health, including Van Soelen Kim. "Farm-to-School is one of the crucial components of changing this tide of obesity that's happening across the country," she says.

The community adopted the Farm-to-School concept 12 years ago, and Van Soelen Kim says it has grown to become a "national movement" connecting local farmers with school meal programs. "In addition to that, they also educate children about the importance of local agriculture and hopefully inspire them to someday become farmers, to love eating healthy food and really understand the full cycle of where their food comes from," she says.

"Farm-to-School is one of the crucial components of changing this tide of obesity that's happening across the country." - Julia Van Soelen Kim, Farm-to-School program coordinator. 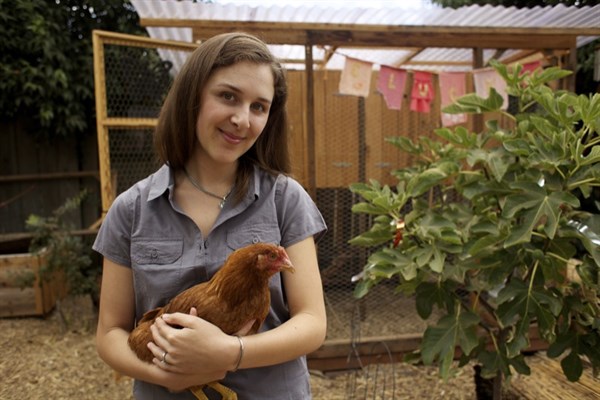 Part of the Davis food cycle includes chickens. Van Soelen Kim has an elaborate, two-story chicken coop in her backyard. It's adorned with a pink and red banner that reads "cluck." "This coop was on the 'Tour de Cluck,'" Van Soelen Kim says. The event is an annual spring fundraiser for the Davis Farm-to-School program. The coop and the program got some national attention in July when The New York Times spotlighted it in an article about urban coops.

"We actually had over 200 people stop by our house and enter the side yard and tour our coop, and then go on by bicycle to the next coop which was just a few blocks away," Van Soelen Kim said. The event helped generate $15,000 for Farm-to-School. It's also a way to connect the meals kids eat for school lunch - like the frittata - with the real world.

"We had lots of kids riding their bicycles with their families, and then we had some of those chickens in the Central Park gardens for the day so that visitors could see the different breeds of chickens."

"So right now we'll have squash and we'll have carrots and stuff like that," Peterson says, as she walks through the vegetable patch in the gardens. "People can see the whole transition of the kind of food that's going to be served at the market or at the school lunch - unless some of the neighbors decide to make a midnight raid - which has been known to happen."

The Davis Farmer's Market takes place twice a week at the park. Farm-to-School has a big presence at the market, including a wood-fired oven leased from a local restaurant that's used to bake pizza which is sold at the market. "It's a one-and-a-half ton oven that is pulled by a vehicle, and it's just like any pizza place you to into.

"But it's not slathered with cheese. Even the crust -- it's whole grain because we're trying to get more whole grains into the school program. So we now have a visual image to the community to see what we're talking about," Peterson says. 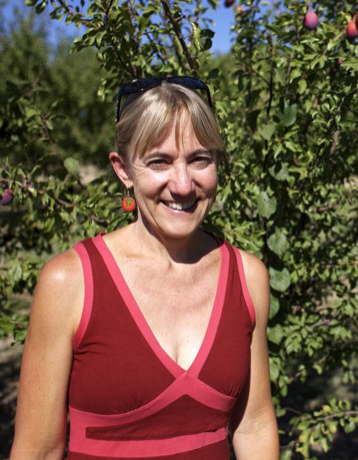 One of Farm-to-School's first successes was to put salad bars in Davis elementary schools. Gail Feenstra is a food systems analyst with UC Davis who helped set up the salad bar program.

"It was really fun for us as Farm-to-School organizers to watch because we started these things in the elementaries. And then those kids gradually grew up and then they went to junior high. When they went to junior high there was no salad bar, so they started complaining - 'where's our salad bar? We're used to a salad bar.' They were writing letters to the school board - 'how do you expect us to live without the salad bar?'"

"The Parcel Tax has allowed us to have salad bars at our school sites every day." - Rafaelita Curva

"The Parcel Tax has allowed us to have salad bars at our school sites every day," Curva says. "I have this great community support. First the parcel tax, and then we learned how to use our current resources, which were the school lunch ladies, develop through professional classes in cooking."

Ann Evans, a school food consultant with Evans and Brennan, says the Davis program is known nationally. "Davis is really known throughout the country as an early adopter of significant changes in a variety of aspects of its school lunch that relate to the environment of school lunch, the education program of certificated and non-certificated and parent volunteers who work in school gardens, the actual food on the plate and professional development in particular," she says.

Evans is a former mayor of Davis who was inspired to work on improving school lunches about 12 years ago when her daughter was in second grade and there was an end-of-the-year class party. "One of the mothers had brought as a treat this product called 'Lunchables.' Not only was there no, what I considered, food in there, all the plastic food more-or-less, but none of the packaging was recyclable and it was being presented as a treat - so those three just pushed me over the edge."

"Please, join us at the table and taste this most delicious item at the peak of its flavor that these loving hands prepared for you." - Ann Evans, school food consultant and former Davis mayor 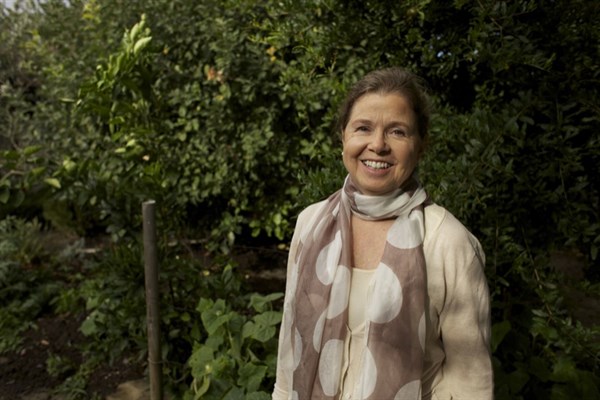 Evans formed a consulting business on sustainable food systems with cookbook author Georgeanne Brennan. They advise school districts throughout California. She also co-founded Davis' food co-op and farmers' market. She can get pretty emotional about school lunch, and sometimes her eyes start to tear-up when talking about it.

She sees it as much more than just nourishing young bodies. "It's 'please, join us at the table and taste this most delicious item at the peak of its flavor that these loving hands prepared for you.'"

Evans says she gets so emotional about the topic "because I think that's fundamentally the way to nurture the next generation. That's the role that a civilization plays and I imbue school lunch with that symbolism. My ideal of a school lunch and nation school lunch program is one where the school lunch is universal and that all kids are equal when they sit down to that school lunch."

She says it goes beyond the food served. "We did a list of no-cost changes that could be made by a school district in the school lunchroom to help improve the environment. So, we're working with one district where the school food service director doesn't feel he can go to scratch cooking right now, but he can introduce fresh garnish and certain flavors into some of his fresh foods. So those principals developed in Davis are being adopted by other school districts."

The Balancing Act: Providing Food Kids Need and Food They Like

Yolo County's Agricultural Commissioner has asked Farm-to-School staff to expand the program to other school districts throughout the county. Van Soelen Kim is part of that effort.

"In the rest of Yolo County, there's a greater percentage of free and reduced price eligible students, and so what that means is that those children don't have the option of bringing lunch from home and their only option is school lunch. And so it becomes even more important that the school lunch is of high quality," she says.

She admits that it's a balancing act. With nearly three decades in the food service industry in Northern California, Curva says the new federal guidelines improving school lunch confirm the road she's been taking in Davis for the past decade.

"It was amazing how through these many years in my career I have seen a going back to the basics of cooking and school meals," Curva says. "It went from scratch cooking to fast-food type of food wherein everybody was just driven by profits; I would think selling more a la carte food. And it has done a full-circle, and now we're going back to basics, which is very, very good."