Schools on the leading edge of the move to improve nutrition may take different approaches, but the most innovative programs have one thing in common: a strong focus on serving the needs of their communities. Districts such as San Juan Unified provide healthy meals for all students, regardless of their ability to pay…even over the summer when school is out. Marianne Russ stopped by the Summer Fun Café.

What's on the menu? "We're making hot dogs. Also we're having a cheesy breadstick with marinara and then we also offer a deli sandwich that's turkey, cheese and lettuce," says Rachel Stewart, supervisor for the district's free summer lunch program. Meals are served at San Juan Central, a pre-school and resource center in Carmichael.

"We're actually really shocked about the broccoli this year. They're having the broccoli with the ranch. Way more popular than I'm used to." - Rachel Stewart, San Juan Unified summer lunch supervisor

"Today we have broccoli or carrots with ranch dressing," she says. "Then we also have a variety of fruits - apples, oranges, cantaloupe, bananas - and then obviously, your milk." Stewart says she's been surprised by the most popular items this summer. "We're actually really shocked about the broccoli this year. They're having the broccoli with the ranch. Way more popular than I'm used to."

Summer Fun Café Open To All

The "Summer Fun Café," as the free program is called, is open to all kids age 18 and younger. There's no sign-up and there are no income qualifications. Participants don't even have to be students in the school district. Stewart says sometimes they feed only 60 or 70 kids, but they often get a lot more.

"Even if we're only feeding one kid that's hungry, it's a success, so the fact that we sometimes get over 150 kids, it really feels like we're making a difference," she says.

In the San Juan district, 42 percent of the 40,000 students are eligible for free or reduced-price lunch. But in the neighborhood around San Juan Central, 88 percent of the kids are eligible. That's why the district qualifies for federal funding to pay for the summer program.

"I really see a need. So many students can go without a healthy meal during the summer, be that because it's easier to have a peanut butter and jelly sandwich or in their home there's no food," says Monique Stovall, Director of Food Services for the district.

"I really see a need. So many students can go without a healthy meal during the summer, be that because it's easier to have a peanut butter and jelly sandwich or in their home there's no food," - Monique Stovall, Director of Food Services 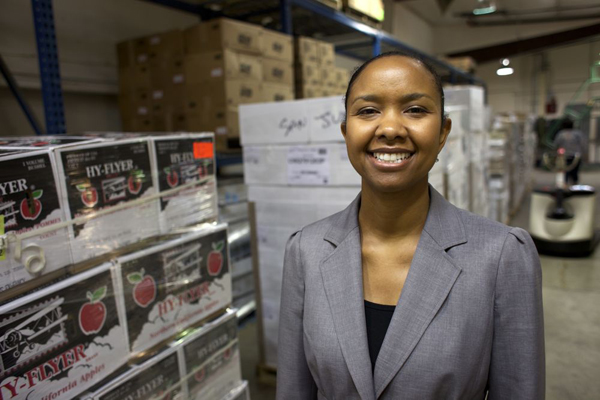 At the Summer Fun Café kids move through an indoor lunch line out to a courtyard with picnic tables, grassy areas and a jungle gym. Roy Shier brings his sons, Dakota and Willie, to lunch nearly every day. "It's a way of getting something to eat and it's not breaking the bank," he says. "It's also a way of making sure that they get a little bit of a balanced diet and they get away from the house."

Dakota, who is entering ninth grade, cleaned his plate. "It was really good. I had cheesy breadsticks, cantaloupe and chocolate crackers with white milk," he says. During the school year, Dakota says he typically chooses a big salad for lunch with lettuce, carrots, red onions and ranch dressing. His brother, Willie, a seventh-grader, doesn't share Dakota's fruit and vegetable habit.

"I don't like salad," he says. "And I don't like the peaches and the pears and the apples and what else. The really thing I only like is bananas."

A few tables away, Gisele Avery is finishing up her lunch. There's nothing left on her plate but melon rinds. The first grader says she liked the meal she just finished, which included a hot dog, cantaloupe and a chocolate bear. She especially liked the cantaloupe, calling it "soooooo good!"

The first grader and her dad, Dean, ride their bikes to the free summer lunch program most days. They enjoy socializing with the other kids and parents, but Dean knows there's also a serious side to the program. "You know, some kids, they come and they just eat because they're hungry. So they're just glad to have food, to, you know," he says.

"Yeah, I think it's really important that it continue on to have a good lunch program at school, because that might be the best or the healthiest meal some kids get to have."

Jesse Bevins is a second grader who comes to lunch about twice a week with his mom, Tina, and his younger sister. When asked about how big of a difference the free part makes in the family food budget, Tina says: "Since I'm a stay at home mom and still looking for a job, it helps a lot."

Unbeknownst to them, the summer lunch diners play an important role for the program as taste-testers. "We thought it was a great opportunity to get feedback from our customers," says Director of Food Services Monique Stovall. "We've taste tested just recently some bean burritos, and they let us know which one they liked and we will be putting it on the menu next year."

Take a guess which one was the favorite. "They chose the more cheesy one," Stovall says. The tortilla is whole grain, as required by the new federal guidelines. She adds that she has be creative to find healthier options that kids will eat.

"They love our chicken nuggets, so how can I figure out or find a company that can provide me a chicken nugget that's healthier?" - Monique Stovall, Director of Food Services

It's Much More Than Lunch

During the school year, San Juan serves more than 14,000 lunches a day. Stovall says more whole grains and more fruits and veggies drive up costs. The federal government is giving districts an extra six cents per meal. What can she buy with that?

The federal government will reimburse the San Juan district for putting on the summer lunch program, but Stovall doesn't know if the funds will completely cover the true cost. She says even if they don't quite break even, she'll still find a way to offer it again next year.

"It's much more than lunch. It's our community," she says.