A strong El Niño is predicted to help ease drought conditions in some, but not all of California.

"Strong El Niño conditions are ongoing across the equatorial Pacific, with robust atmospheric coupling," according to the Climate Prediction Center. "The latest CPC ENSO advisory indicates a 95 percent chance that El Niño conditions will persist through the winter months. Therefore, climate anomalies associated with El Niño events, which become increasingly prominent over the U.S. during the Fall and Winter months, played a significant role in this outlook."

"For the Southwest, El Niño associated climate anomalies favor an enhancement of the early wet season," the CPC says. "Therefore, drought improvement is favored across central and southern California."

California Heads Toward Fifth Year Of Drought In 2016

But the drought is forecast to persist or intensify across northern California, northern Nevada and all of Oregon and Washington.

"A strong El Niño is in place and should exert a strong influence over our weather this winter," says Mike Halpert, deputy director, NOAA Climate Prediction Center. "While temperature and precipitation impacts associated with El Niño are favored, El Niño is not the only player. Cold-air outbreaks and snow storms will likely occur at times this winter. However, the frequency, number and intensity of these events cannot be predicted on a seasonal timescale."

Despite the outlook for improvement, the drought in California isn't going away. Halpert says "a wetter-than-average winter is unlikely to erase four years of drought."

"While it is good news that drought improvement is predicted for California, one season of above-average rain and snow is unlikely to remove four years of drought," said Halpert. "California would need close to twice its normal rainfall to get out of drought and that's unlikely."

The next seasonal outlook will be issued November 19.

With a strong El Niño forecast to bring a wetter-than-normal winter to much of California, southern California cities and counties are preparing for heavy rainfall, mudslides and flooding.

Los Angeles County is stocking up on sandbags at fire and sheriff's stations and mapping homeless encampments in riverbeds and other areas in danger of flooding. 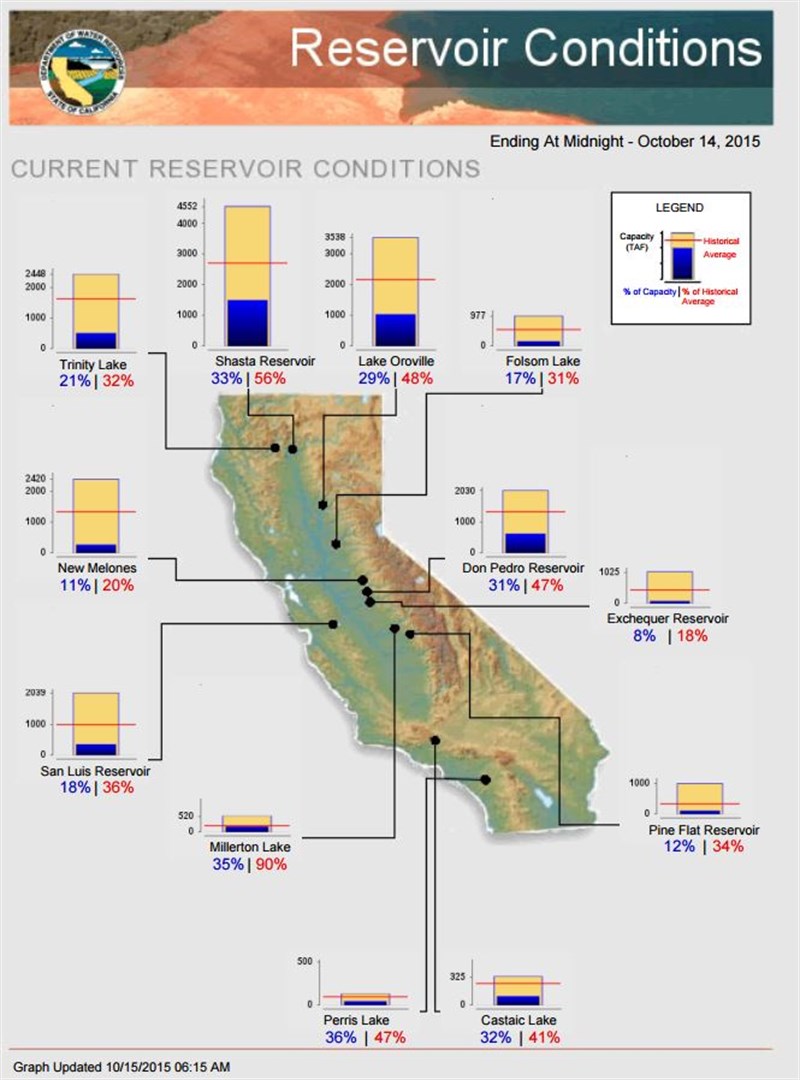 While some rainfall flows into reservoirs and helps replenish groundwater, it is snowpack in the Sierra Nevada that supplies water to urban users and farms in the spring and summer. The CPC says the three-year runoff last winter was the fourth lowest in more than 60 years and reservoir storage is "quite low."

Lake Folsom is at 17 percent of capacity, its lowest level since 1992.

The California Department of Water Resources said the April 2015 Sierra snowpack was the lowest since 1950 and there was minimal spring runoff from that point forward.

No Weekly Improvement In California Drought

"After last week’s widespread and unseasonably heavy (0.5-1.5 inches) rains in southern and eastern California and western and northern Nevada (locally to 2 inches), more typical dry and warm weather returned to the region," according to the U.S. Drought Monitor released Oct. 15. "The recent wet weather did nothing to offset the long-term drought, but may have aided in the suppression of wildfires as September and October are normally the biggest months for fires in California."

There were no changes in the weekly percentage of drought in California:  92 percent of the state is in severe drought, 71 percent is in extreme and 46 percent is in exceptional drought.