Turning The Lights Back On After The Butte Fire

The Butte Fire in Amador and Calaveras Counties has left 70,000 acres of gray earth and scorched trees. In many areas, the quiet is reminiscent of, but also starkly different from, the silence of a snowfall. 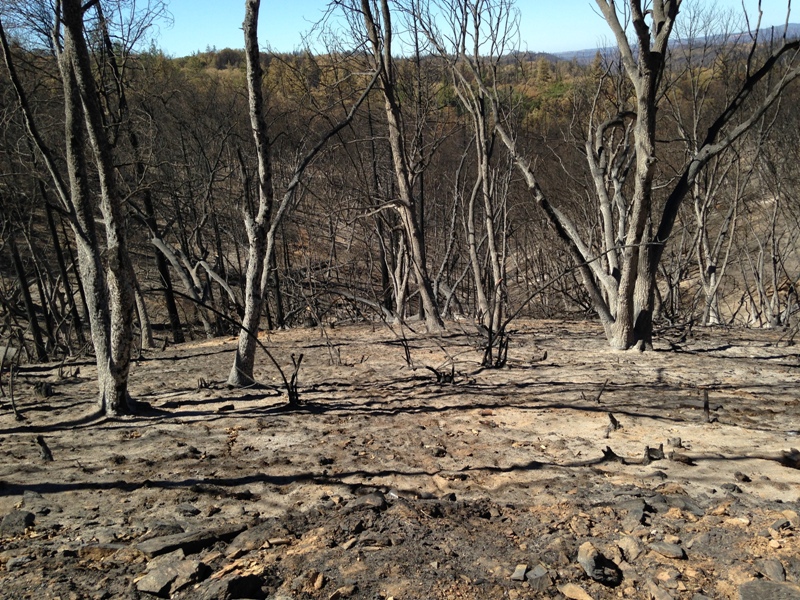 But, not all is quiet here and there are splashes of color. Scattered throughout the burnt landscape are Pacific Gas and Electric employees in sky-blue-colored boom trucks and contractors with orange or yellow backhoes and bulldozers. 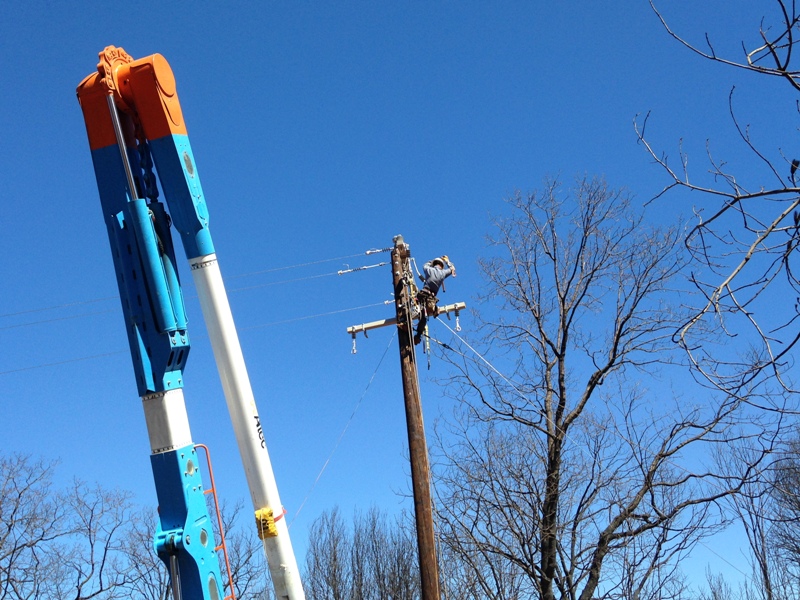 Curt Schmidt is in the Mountain Ranch area east of San Andreas. He is the General Construction Supervisor for PG&E and is in charge of restoring the backbone of the power grid.

He says Cal Fire allowed PG&E crews into some burn areas within hours or days after the fire started.

"We had assessment teams come through here in the beginning and assess every pole location."

He says some of the maps had to be re-drawn as the fire moved erratically.

"We did have folks in here early who had to get out because of the fire turning on them."

The maps they have now tell them where they need to go. 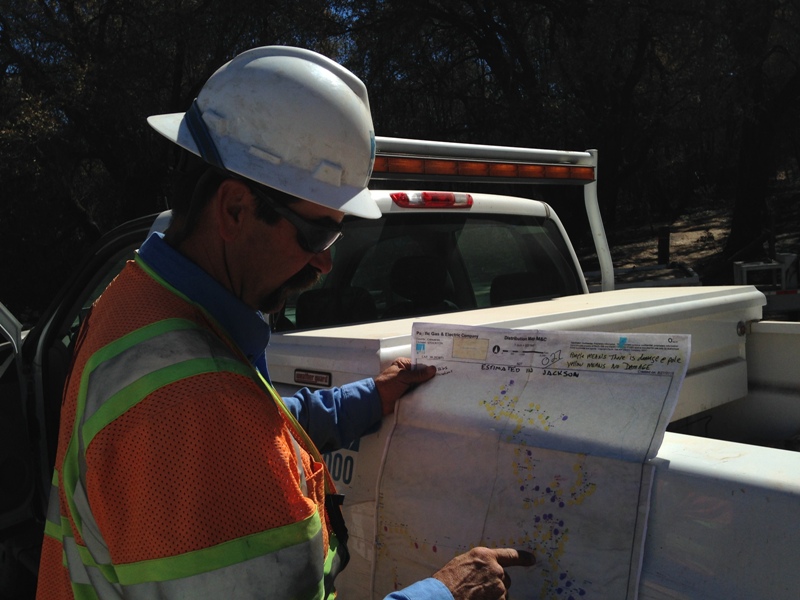 "They went through and marked any of our structures that are still standing as yellow and then marked any location where there's work to be completed whether it be a broken cross arm or burnt pole. That's highlighted in purple." 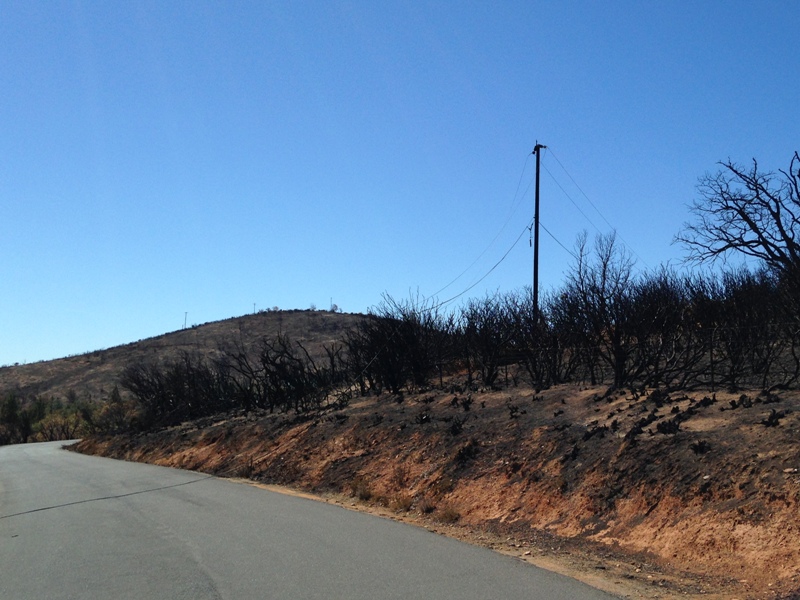 Each post is numbered and mapped and sent to estimators who write up the job packages and send them to crews and contractors.

Some of the contract work goes to loggers like Bob Poston. 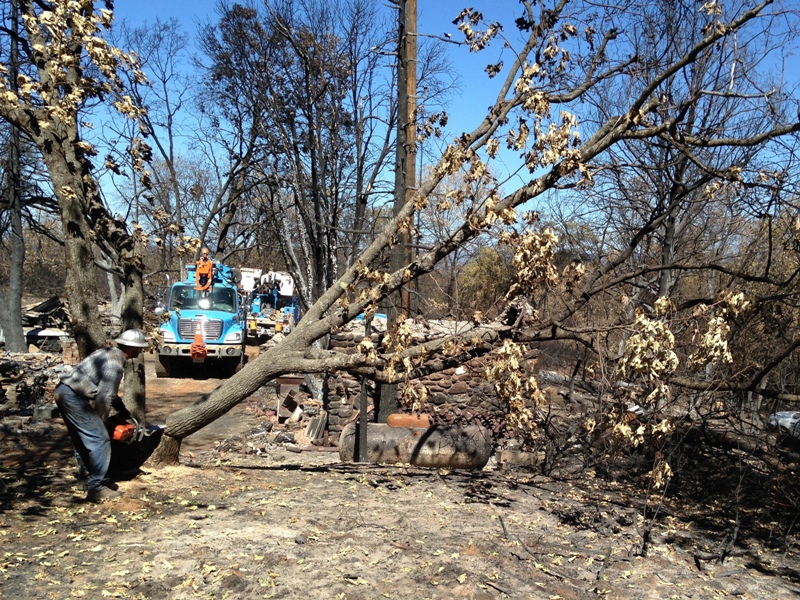 "We're cutting everything that's on these power lines pretty much. You kind of get the idea of what we're cutting right there. Everything's burnt out at the stump."

Vegetation experts have used bullseyes to flag trees that are severely burned or supported only by other trees.

Cisco Hernandez is a lineman on a crew working 16-hour days on Doster Road. He says sometimes trees that aren't marked are ready to fall too. 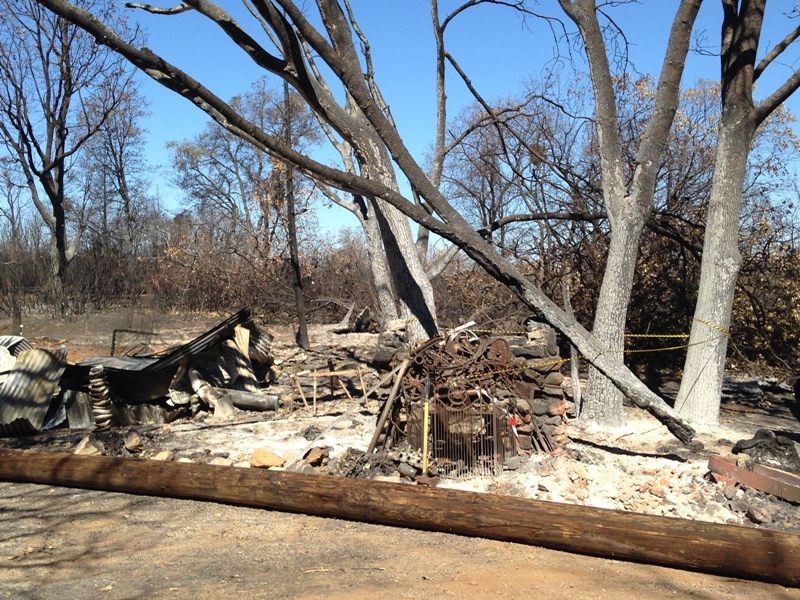 "Burning trees and widow makers and you know a lot of times the trees are still coming down or they're a threat."

Hernandez and his line mates have the task of safely bringing down a pole with a 250-pound transformer dangling from it. The pole has fallen over into some  trees. 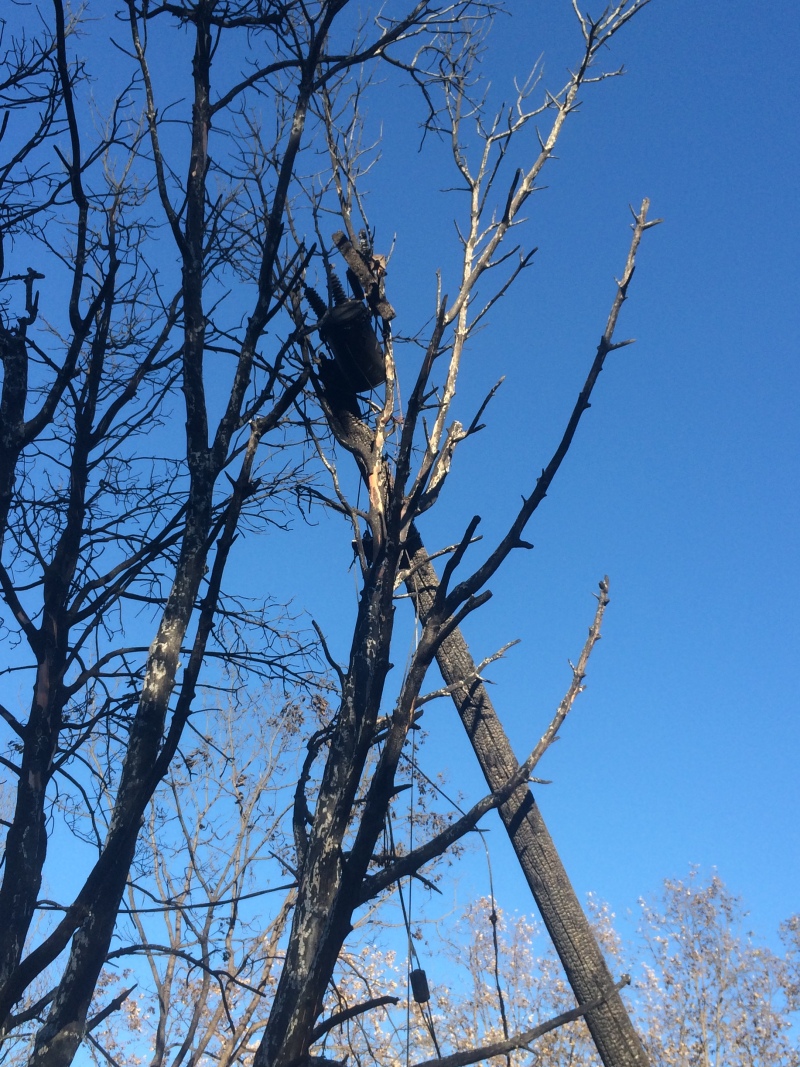 Jim Patterson supervises the operation. He says it's not something they encounter often.

"You use two trucks, one bucket to get up there to rig him onto and another bucket truck so the guy can get up there  and hook him up to take the strain off of it. Because we don't want it to come crashing down."

After the pole and transformer are secured, Albert Martinez attaches a strap to the pole's stump. Heavy equipment operator Steve Worley pulls it out of the ground with a boom truck then drills a new hole for a new pole with an augur. 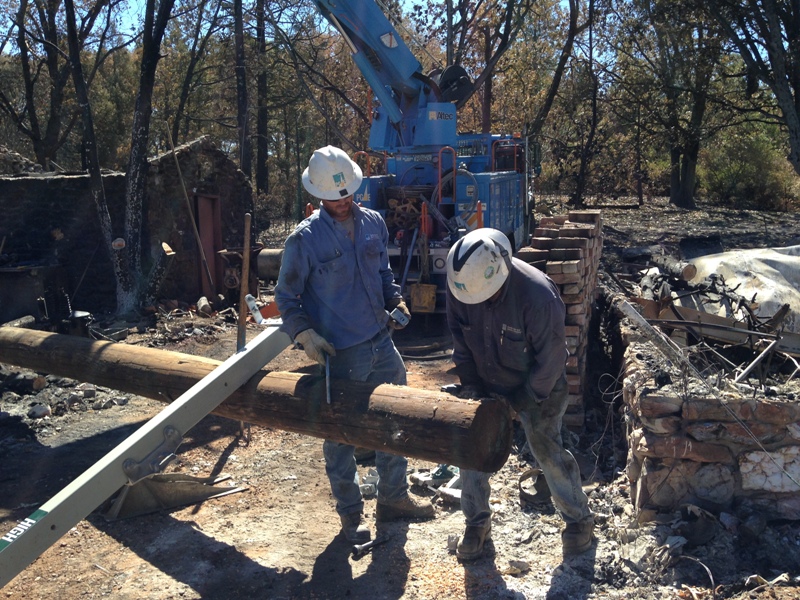 Then Martinez and Justin Romney drill holes and attach the cross arm before the boom lifts the new pole into place. 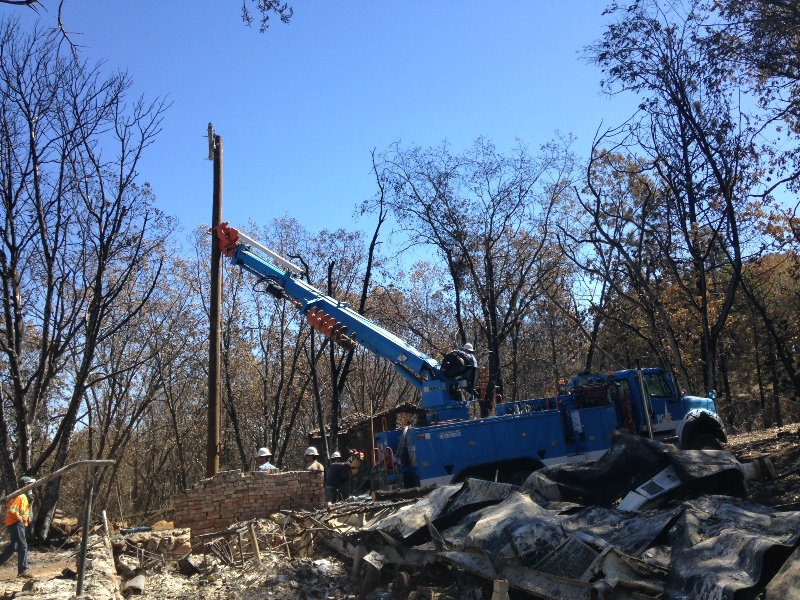 Curt Schmidt says they were able to use a piece of equipment they call a spider that can carry poles across treacherous terrain like the sides of  canyons.

"We were able with the special equipment that we've got in here to get most of them set with the equipment, but there's still several poles that I'm aware of that we have to fly in." 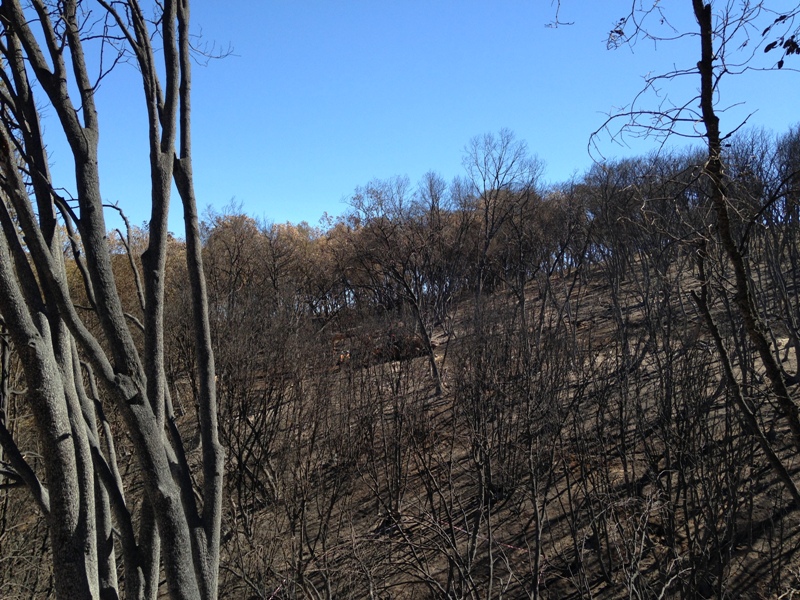 And to connect poles on opposite sides of a canyon, crews will use something called a line gun...which Curt says is just what it sounds like.

"It's actually an old military gun that they used for when the ships come in to get the marine lines in. So, they shoot that small line in and they put a bigger line on it an bigger line and keep pulling it in."

Of course, the trucks and the tools and spiders and the line guns may sound like grownup toys, but the crews know why they're here. Curt says all they have to do is look around. 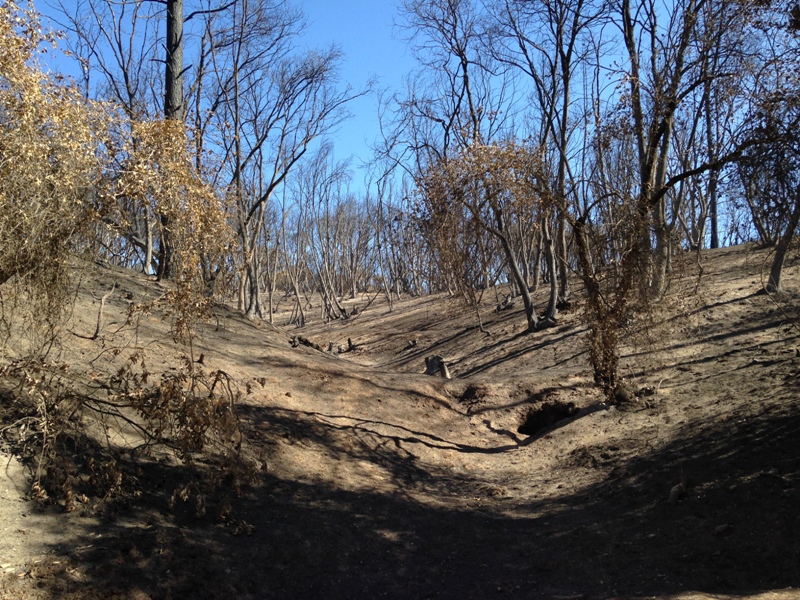 "We have miles and miles of destruction. Some places are a little hit and miss and its obvious on our maps where we see the marks, but it's just it's  hard to fathom how wide and how big this thing went through here and how much it took out."

PG&E identified 900 poles that required replacement. So far, crews have replaced about 800.

Crews have restored power to all but a few dozen of the 15,000 customers in Amador and Calaveras counties, effected by the Butte Fire, except for the people who lost homes.