11:25 p.m. - Strong winds and extreme drought conditions have contributed to the swift growth of the Washington Fire, according to fire officials. The blaze scorched almost 15,000 acres as of late Monday.

There are 500 personnel assigned to the incident and zero percent containment.

The U.S. Forest Service InciWeb site for the fire states:

Resources are focusing their efforts on the NW flank of the fire in an effort to protect the town of Markleeville, CA.

There is heavy smoke in the area of the fire as well as drifting to surrounding communities. Be advised to take precaution in areas of heavy smoke and drive safely.

More accurate mapping will be available after an aerial flight is conducted.

1:30 p.m. The wildfire burning near the Sierra Nevada town of Markleeville has now scorched 9,500 acres, according to the latest update from the U.S. Forest Service.

According to the latest post from the agency, there is heavy smoke in the area of the fire and in the communities nearby. 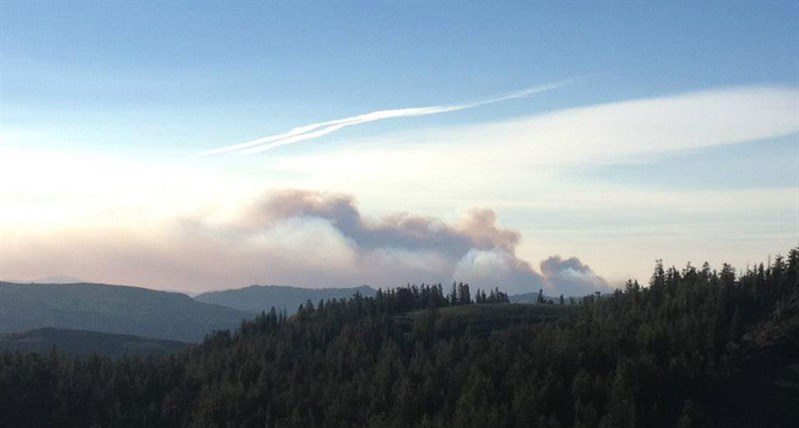 10 a.m.: InciWeb posted the following update on the Washington Fire:

Washington Fire Grows to Around 8,000 Acres

The lightning caused Washington Fire started 45 miles south of Carson City Nevada. The fire grew to around 8,000 acres since initial attack efforts began on Saturday June 19 at around 7:00 p.m. The extreme fire activity being witnessed with the Washington Fire is primarily due to strong erratic winds and severe drought conditions. These two variables also played a role in firefighting efforts for both air and ground support yesterday.

On Sunday June 21, the Type 3 Sierra Front Incident Management Team was assigned to the Washington fire. A transition to a Type 2 incident management team was carried out as of 6:00 a.m. Monday June 22. The interagency Incident Management Team (Great Basin Team 4-Wilcox) took over operation due to the complexities of the incident. Approximately 300 personnel are assigned to the incident with more to arrive today. Fire officials will utilize both air and ground support, in their efforts to combat the blaze. As of 8 p.m. last night the fire was estimated to be approximately 10% contained.

The fire is burning southeast of the mountain community of Markleeville, California. Several campgrounds along Highway 4 to the north end of Markleeville have been evacuated. In addition, Highways 4 and 89 in the Monitor Pass area are closed. As a precaution, Markleeville residences have been advised to prepare for an evacuation if the need arise, however, no mandatory evacuations are in effect for Markleeville at this time.

The weather forecast calls for another day of high winds which will hamper containment efforts. While the winds are expected to subside after today high temperatures are forecasted later in the week along with possible thunderstorms that can cause erratic localized winds later in the week.

Firefighters are busy throughout California as summer gets underway-- and summer fires.

About 6,500 acres have burned near the Sierra Nevada town of Markleeville-- south of Lake Tahoe. Local authorities say homes are threatened and have been evacuated and fifteen historic cabins are also in danger.

Highway 4 in the area is closed as is the Highway 89 Pass at Highway 395. Firefighters say they are battling the blaze under extremely windy conditions.

At the last update, authorities say it is ten percent contained.