A bill that passed the Assembly Wednesday would require some of California's public colleges to create resource centers for the state's growing number of undocumented students. Advocates say a center that opened at UC Davis last Fall could serve as a model.

“I’m a strong believer in that you have to get at least one hour of sleep to be efficient throughout the day, but I had to get my work done,” he says.

He always has enough energy for his internship at the AB 540 and Undocumented Student Center. AB 540 is a 2001 state law that allows in-state tuition for anyone who attends a California high school for three years, among other requirements.

Rodriguez’s job is to work with high school students, with uncertain immigration status, make the transition to college. Being undocumented himself, he understands that students have many questions.

The center, which serves nearly 250 students, functions as a one-stop shop for financial, academic and legal concerns. An immigration lawyer is available twice a week to meet with students and community members.

“One of the many challenges is feeling like you would need to ‘out’ yourself every time you go to a different campus entity,” says Marcus Tang, a former UC Davis Law Student who is now the center’s immigration lawyer. “One of the goals for [the center] is to minimize that as much as possible by consolidating services, resources and support in one space.” 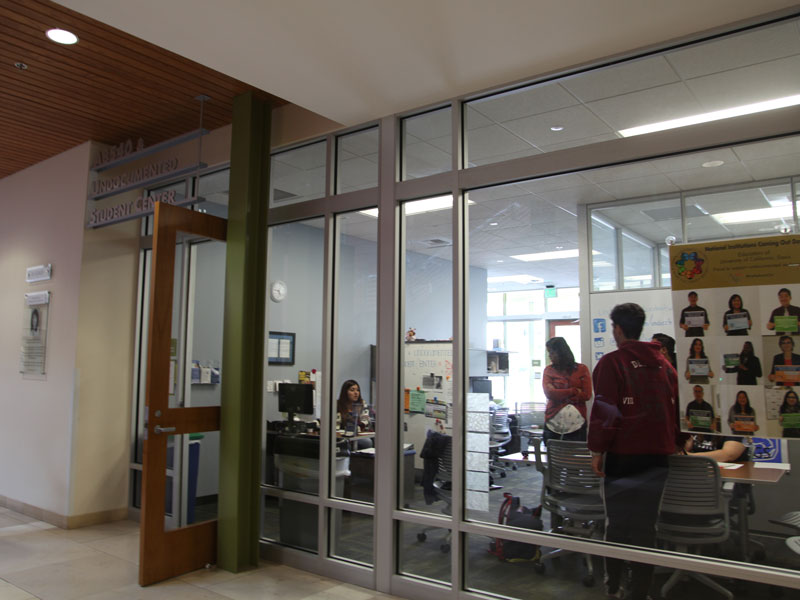 Advisers from different parts of campus and mental health counselors are on hand and staffers host workshops and support group gatherings.

The resource space, which is located inside a building also housing the LGBTQIA and Cross Cultural centers, feels just like any other study lounge. Volunteers sit at the front desk welcoming students or answering calls. There is a conference table on one end of the room and comfortable chairs for lounging on the other end. Students hang out at lunch to use the center’s fridge and microwave.

Ana Maciel, a UC Davis junior and the academic coordinator at the center, considers it ‘home.’

“It’s a space where you can talk about being undocumented, you can straight up say undocumented in a sentence and it’s not a big deal,” she says. 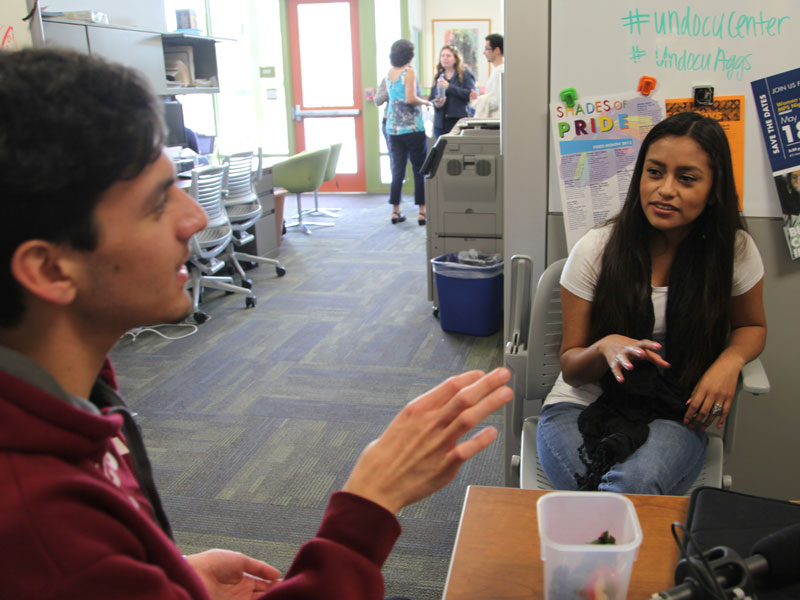 The center is a part of a larger effort across California to ensure undocumented students are connected to resources that could help them succeed in college.

A measure (AB 1366) that passed the Assembly and is now heading to the Senate, would mandate CSUs and community colleges with populations of 500 or more AB540 students to create “Dream Resource” centers. If a college has fewer than 500 students, they must provide a staff person who can give equivalent services. The bill requests that the UC campus do the same. (Measures that affect the UC system have to be approved by the Board of Regents).  Campuses would not be required to physically construct brand new centers and could use existing spaces.

“What I’m seeking with this new law is to complete [that investment] and make sure those students graduate from colleges and universities and [become] professionals in our area,” she says.

According to a recent study from UCLA’s Institute for Immigration, Globalization, & Education, there are nearly a quarter of a million immigrant youths navigating higher education across the United States.

The study, which surveyed about 900 participants throughout the U.S., found that students with uncertain immigration status experience higher levels of anxiety. They also reported being treated unfairly or negatively due to their status.

Pedro Trujillo, with the Coalition for Humane Immigrant Rights of Los Angeles, a group advocating for AB 1366, says those emotions are common. He attended Cal State Northridge and thought he was the only person on campus who was undocumented.

“There’s a sense of alienation that takes place and I think a center or centralized location would actually make people feel more comfortable and accepted by the university,” he says.

An analysis of AB 1366 found that all UC campuses already have some type of resource space. Four out of 23 CSU campuses and some community colleges also have similar spaces.

But Trujillo says the center at UC Davis is ideal.

“They have a space that’s visible,” says Trujillo. “It’s not hidden from the public, it’s not hard to find and it’s very open.”

“These kind of centers provide an opportunity to create a sense of community, so that students don't feel isolated, so that students feel empowered to take full advantage of their educational experience ,” says Lang.

“The biggest issue that I see on a daily basis with students is the constant struggle to feed themselves, to pay for books,” says Gaytan.

Gaytan says the population on campus has tripled since 2012 because of new laws that have given students more access to financial funding or grants.

Staffers at the center help students navigate the complex web of federal and state laws that each require different sets of paperwork.

Most undocumented students qualify for AB 540, which makes them eligible for state grants under the California DREAM Act. Many young people in college are also eligible for  Deferred Action for Childhood Arrivals, or DACA, which provides a two-year relief from deportation and work authorization from the federal government. DACA allows students to get part-time jobs, which further helps with expenses.

This graphic shows the increase in the number of student applications for the California Dream Act. The law qualifies students for state and institutional financial aid. Source: California Student Aid Commission

“The state and the federal government are not in-line with each other all of the time,” Gaytan says.

Immigration Attorney Marcus Tang says the most common inquiry he gets is how to apply for DACA. But while DACA is an option that brings benefits to students, it’s not a path to citizenship. Tang says many of the students who ask him for help entered the U.S. at a very young age. Family petitions may be an option for them, but the process could take up to 25 years.

“A lot of students are very frustrated by the fact that even though they pretty much live the same lives as their peers have lived, in that they grew up in the United States, they went to schools in California, grew up speaking English, they do not have the same benefits as a lot of the same people they grew up with,” says Tang.

Aside from legal advice, students come to the center for emotional support. Gaytan says students often carry the burden of worrying about family members who are in the country without lawful immigration status. The constant anxiety can take its toll.

“[It’s] always something that I think is in the back of somebody’s mind, and it’s a hard feeling to shake,” says Gaytan. “How that impacts a student’s ability to focus at school is something … that I, as a practitioner, definitely observe and hear students talk about.”

Gaytan says the center offers students a space where they can talk about their worries.

“They don’t have to shy away from talking about their status or their family member’s status and they can be … honest without fear, judgment or criticism,” she says.

A popular program at the center is Coffee Talks, a bi-weekly gathering where students discuss their experiences and talk about their goals for the future.

Ana Maciel was brought to California when she was one. She grew up in Soledad, Calif. just outside of Salinas and only learned about her status her senior year of high school.  She says her first year of college would have been easier if she had a resource center to go to, especially when it came to questions about tuition.

Maciel qualified for in-state tuition through AB 540 because she attended and graduated from a California high school. At first, she didn’t understand it and didn’t have anyone to talk to about turning in the proper paperwork. As a freshman, she was charged out-of-state tuition -- about $38,000 compared to the $15,000 that California residents pay. 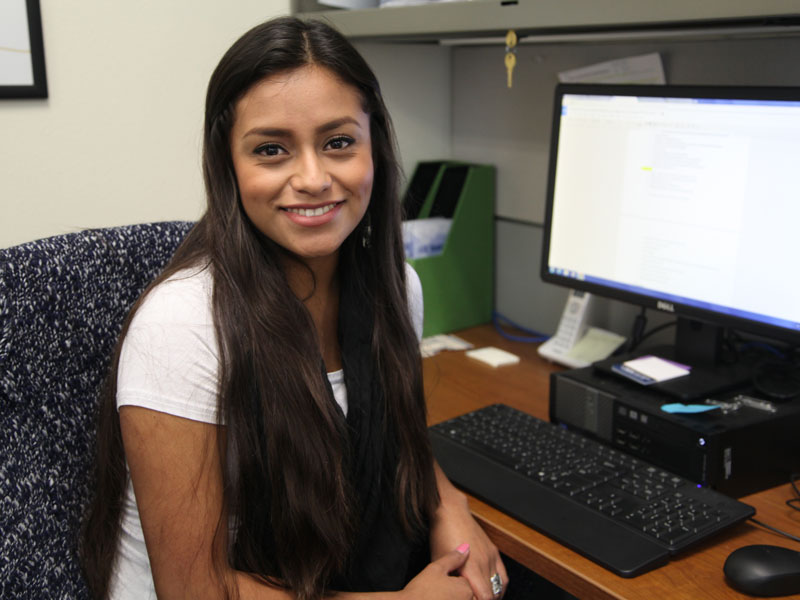 Maciel, who is a double major in Chicana/o Studies and Women and Gender Studies, says she’s happy to have the UC Davis center, but she still has a lot of hurdles ahead. She hopes to become a professor.

“And I’m hitting another barrier because there’s not many opportunities for undocumented students in grad schools,” she says.

Still, she remains optimistic and says students like her should be given a chance. 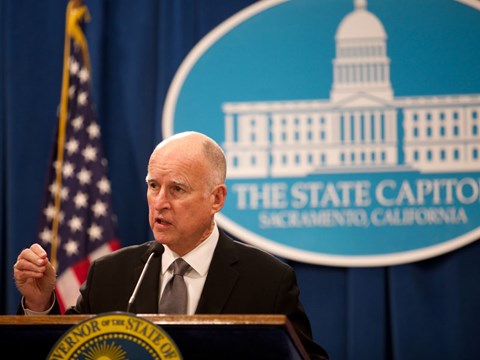