Task1ne may have taken his namesake, Marvel super-villain, Taskmaster a little too literally. Allegations surfaced last week that the emcee has been lifting full verses and, in one case, an entire song from other artists. Nerds in the audience will know that Taskmaster’s power is to mimic movements of anyone he sees. Is Task1ne paying extreme homage to a comic book anti-hero or just blatantly stealing?

“You’re talking about a 16-bar verse – 12 out of 16 of the bars for one verse were stolen,” said Century in a phone interview Wednesday afternoon.

Task1ne, born Corey Pruitt, rose to prominence in the Sacramento hip-hop community, garnering attention of many media outlets, including this one, as well as winning a SAMMIE for Emcee of the Year in 2012. He recently was accepted into a network for emerging hip-hop artists called Team BackPack.

The future was looking pretty bright for the rapper, and then he was accused of breaking the number one rule of hip hop.

The videos that emerged earlier this month place Task1ne’s raps next to those of the artists he’s accused of ripping off. Task1ne’s friends defended him online, while he disappeared, cancelling some of his social media accounts and leaving his phone unanswered. On Sunday he released this response video:

In the video he claims he’s guilty of “overworking himself and cutting corners,” he said he felt he had to take every collaborative opportunity and didn’t feel like he could keep up with the caliber of writing expected from him. He also references suffering from depression and a struggle to fit in.

The full count of plagiarized verses varies from just six songs to more than 40. Regardless of the actual number, one thing everyone agrees on is Task1ne made a mistake.

Josh Fernandez covers the hip hop scene and was working on a story about Task1ne for SF Weekly before this story broke.

“I’ve been kind of excited about his career and excited about the things he’s doing … It’s kind of crazy to look at all the lyrics that he’s plagiarized,” said Fernandez. “Obviously hip hop was built on sampling and flipping other people’s melodies - but that’s not what this is. This is someone who took other people’s song and used them word for word and presented them as his own. Hip hop is not stealing and pretending it’s your own and then charging people for it.”

Fernandez referred to the verses Task1ne sold to other emcees to use on their albums. One of those artists is Sacramento-based emcee Bru Lei.

Lei’s album Secret Recipe is set to be released next month and last week Lei realized the song featuring a verse by Taske1ne was stolen from the East Coast Avengers.

“Now there’s a hold on it,” explained Lei. Task1ne’s name is on the credits and Lei doesn’t really know how to release the album and maintain credibility.

Lei said he’d heard about Task1ne using other people’s verses about a year ago but didn’t really know how deep it went. He said looking back it seemed obvious because Task1ne would rap about having a wife and smoking weed, but he doesn’t have a wife or smoke weed.

“I spit the truth, but I guess some rappers are fake and we accept it, but this is fraud to a whole another level.”

When Lei heard about the instances of plagiarism he started googling some lyrics from Task1ne’s collaborations with his friends in the Sacramento hip hop scene. He said search after search came up with stolen lyrics.

Even after finding a bunch of stolen lyrics, Lei didn’t think to check the verse Task1ne gave him.

“It didn’t even cross my mind that he would do it to me,” he said.

Lei said the number one rule of hip hop is to be original. Straight stealing is beyond unacceptable.

“Any similarities that you are purposely doing, and it’s easy to detect that you’re doing, it is not cool in this game,” said Lei.

The bulk of the lifted lyrics are from New York area rapper, Diabolic (Sean George). Diabolic found out about the incident when a fan linked to the video on his Facebook page.

“At first I kind of laughed it off. The kids on the internet were going crazy – talking about beating the sh** out of him,” Diabolic said, and then he started doing some research on his own. “I found over 20 different verses of his with my material in it and other people’s material that I know. It was word for word, line for line.”

Apathy (Chad Bromley) is another emcee Task1ne lifted lines from. 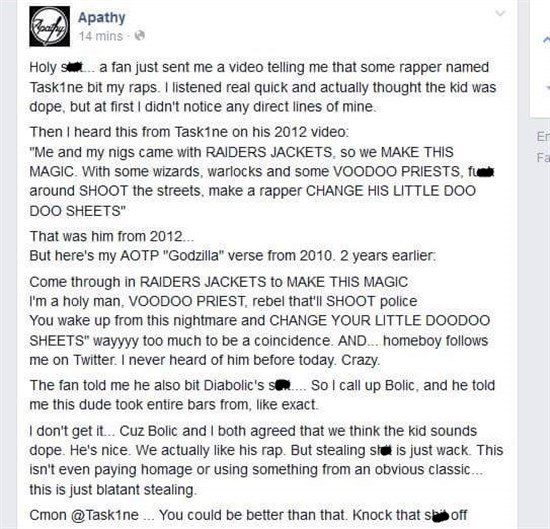 “I was just floored with the audacity. I’ve been doing this since the early ‘90s and I’ve never seen anyone come close to this level of biting and stealing,” said Apathy. “It’s crazy. I wasn’t livid – I was dumbfounded – this guy is ballsy.”

Diabolic said everything Task1ne has done is now called into question; but Task1ne still has some supporters.

Jonah Matranga plays in the Sacramento-rock band Far and collaborated on a Tel Cairo track with Task1ne. Matranga said he thinks what Task1ne did is “whack” but he hoping for a comeback.

“I’m happy to see him addressing it the way he did,” Matranga said regarding the response video. “I’m excited to see what he makes in the ashes of this.”

Matranga said everyone makes mistakes and people should give him a break and let him rebuild. Others are more skeptical about his ability to come back from this.

“He could [come] back and write some amazing raps – but … no one’s going to forget this,” said Apathy.

Fernandez doesn’t see a comeback as a big possibility.

“He’s in his 30s, hip hop is a young man’s game – if you’re caught plagiarizing in your 30s you’re done,” he said. “It’s not a mistake of youth, he was just trying to be too ambitious and he took the wrong route. It’s not a mistake you can recover from as a hip hop artist.”

Diabolic said he and some of the other emcees reached out to Task1ne, but they haven’t heard a response.

“We want to try to wrap our heads around it – we just can’t understand it. It’s something that’s completely foreign to us.”

Of course there’s still the possibility this is all just a publicity stunt, he’s just living out the powers of his super-villain namesake.

“I think Corey is smart, but I don’t think he’s that smart,” said Fernandez.

*CapRadio Music reached out to Task1ne multiple times, but did not get a response as of the publication of this story.